Today’s Card of the Day features Dave Cash, who the Pittsburgh Pirates traded away on this date in 1973. I wanted to make sure I celebrated that trade today because it’s the 50th anniversary of the deal…at least by Topps math. Let’s get right into this card so I can start questioning their sanity. 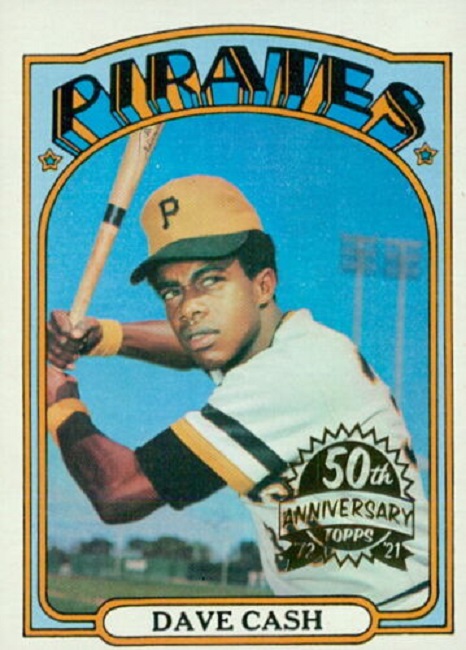 I’ve pointed out the weird decision by Topps to reissue set designs on the 49th anniversary of the cards instead of the 50th. It’s very odd and was unnecessary from the start, but they kept doing it in their Heritage set each year. What you see above is just insane in my mind. Anyone can do the math and know they went 49 years between the original card and the Heritage set. However, they spelled it out here with a big foil stamp on the card that clearly reads, 50th anniversary Topps, 1972-2021. If they just said 50 years of Topps on these cards, then yes, there are 50 different years from 1972 through 2021. That’s not how anniversaries work though, Topps. You’ve never been to a wedding and gave them first anniversary gifts instead. Moms don’t give birth, then get handed a cake with a lit #1 candle. No one sings happy birthday that day either. Last year clearly wasn’t the 50th anniversary of this card.

This is from the same company that issued the 1987 set in the same design idea of the 1962 set for the 25th anniversary. Then just this year, they used the 1987 design for the 35th anniversary in their regular set as inserts. They can do math, I’ve seen it, they know how anniversaries work…sometimes. Don’t get me wrong, I am a huge fan of the Heritage sets, but I also dislike them constantly trying to pass off these cards as something they are not.

If you’re wondering what you’re actually looking at here, I’ll explain that for those who don’t collect newer cards. Topps did a buyback program where they got older cards, added a stamp to them, then inserted them in random packs of brand new cards. It’s been going on for a few years. They once did it for the famous 1909-11 T206 cards, with someone getting an actual Honus Wagner card that is now worth seven figures. This card in the scan is actually a 1972 Topps card that you could find in packs in 2021…the 49th anniversary of the set. 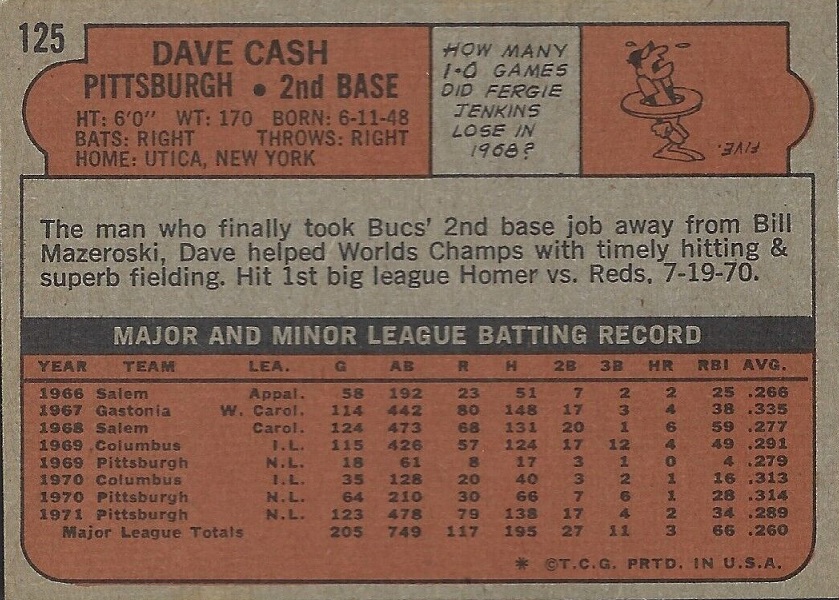 What you’re looking at here is just a regular 1972 Topps back. The special part of this card is just the stamp on the front. I like this particular card because you get his entire card stats in pro ball. That’s quite an intro for Cash in the little bio section, calling him the man who finally took the second base job from Hall of Famer Bill Mazeroski. If he was healthy, I think Mazeroski would have kept that job for as long as he wanted to stay around. No one wrestled the first base job from Willie Stargell, he just couldn’t play every day later in his career.

The cartoon of Generic Gray Topps Man playing Fergie Jenkins crying over another 1-0 loss made me look into that number. He actually lost all of those 1-0 games on the road that year. He also got a no-decision in a 1-0 team loss in Atlanta, where he threw ten shutout innings. Just thought that was a fun fact.

If you want this specific buyback card, there are two on Ebay right now and you can either pay $10 or $7, whichever you think is best. If you want a Dave Cash 1972 Topps card without the stamp added 49 anniversaries later, you can get one of those for around $3 delivered in decent shape.