Today’s Card of the Day was an easy choice once I figured out which one of the eight former Pittsburgh Pirates born on October 17th was going to be featured in this article today. This is the first appearance for Mark Johnson, who has many Card of the Day options due to playing in the mid-1990s when the baseball card industry was still in a boom for newer cards. He has minor league cards on top of the big league cards issued while he was with the 1995-97 Pirates. Let’s get right into this article so you can see why one of them was an easy choice. This is the Tiffany version of card #428 from the 1997 Fleer set. 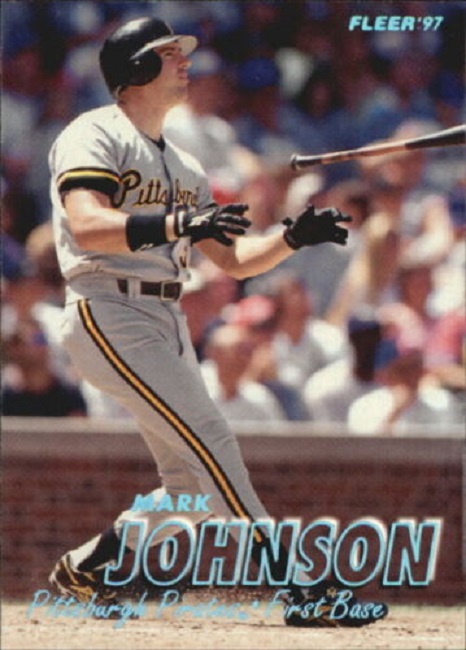 Before I turn into Captain Obvious and explain why I picked this particular card, let me just apologize for the quality of the scans. Ebay sellers are using a shared generic scan for his card in most of the auctions, which is low quality. The few sellers who had original scans of their own either had autographed copies or watermarks on the card. This was the best of the rest, which is why I ended up using the Tiffany version of the card. The blue writing you see here is a gold foil writing on the regular base card from the set. The Tiffany cards are also higher quality and tougher to find. Basically, this card in hand is nicer than what you see here.

Okay, putting on my captain’s hat now…the reason I selected this card is because of the pose. I’m guessing he hit a homer here, or he looked foolish doing a bat flip when he didn’t homer (not that most bat flips don’t look foolish anyway). Let’s assume it was a homer. That means that this photo was taken on July 16, 1996 in the fifth inning against Jamie Navarro with one man on. The easy identifier is the brick wall in the background, which makes this Wrigley Field. Johnson hit just one homer at Wrigley in 1996, so this appears to be a photo from that moment. Whatever happened here, he really dropped the bat quickly, leading to this unique pose. 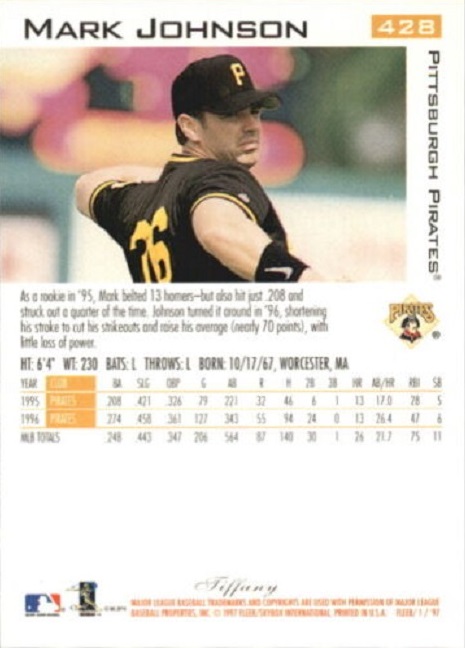 The back of these cards have a nice look, with a second picture of decent size, a Pirates logo from that era, which is always appreciated, a little bio section and some stats. I know it’s hard to read, so I can summarize for you. It talks about him belting 13 homers as a rookie, while also taking a shot at his low batting average and the fact he struck out about 25% of the time. Now he could strike out 35% of the time, collect the same average and homers and be considered a future star. The bio also notes that he shortened his swing in 1996 and did a much better job…imagine that? Making contact more often is better. What I dislike here is all of that empty room, which could have been taken up by minor league stats.

If you’re interested in the Tiffany card or the base card, there is a price difference. While I think gold foil looks better, the blue lettering on the Tiffany card is easier to read, especially here when the gold blends in with the background. Only a few of those are listed and the sellers have high asking prices/shipping charges. The cheapest is $8. The regular base card can be had around $3-$4 from three sellers. You can get a signed copy of the regular card for $6.