Today’s Pittsburgh Pirates Card of the Day article had plenty of options to match up to today’s history article. Not every player had a card available, but there have been 12 former Pirates players born on October 16th, as well as the deciding game from the 1909 World Series, giving me a group of potential players from that game as well. I decided to go with pitcher Matt Ruebel from the 1996-97 Pirates. 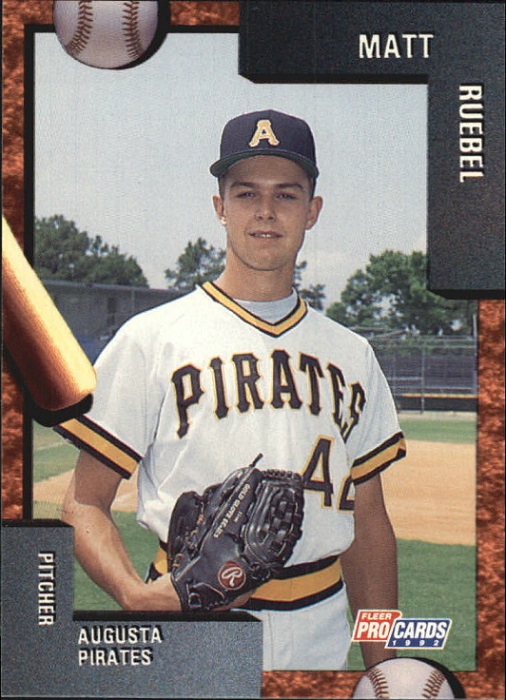 The first thing I noticed here is that Ruebel looks extremely young here, like almost too young to be in pro ball. With the field in the background, this could pass for some high school photo, though he was 22 years old at the time. When I was very young, I had an Augusta GreenJackets hat that I wore all of the time. That name didn’t come around until 1994. They were the Pirates for all three seasons that Reubel spent with the team (1991-93). The cap that he is wearing here looks very similar to one that the Altoona Curve wore recently when they were having a Pirates themed game, wearing black & gold uniforms. The uniform for Augusta here looks like the regular Pirates uniforms, which is something that they also do now in the lower levels.

As for the card itself, I like the look of it. A lot of the minor league sets from a few years earlier were very plain and you could tell that not much went into them. ProCards was guilty of that in the mid/late 1980s, though I’m still a big fan of those team sets because they are still affordable and they have some great early cards of big league players. The front here has a lot going on, but not too much. I think that once Fleer got involved, the cards had to be higher quality than before. 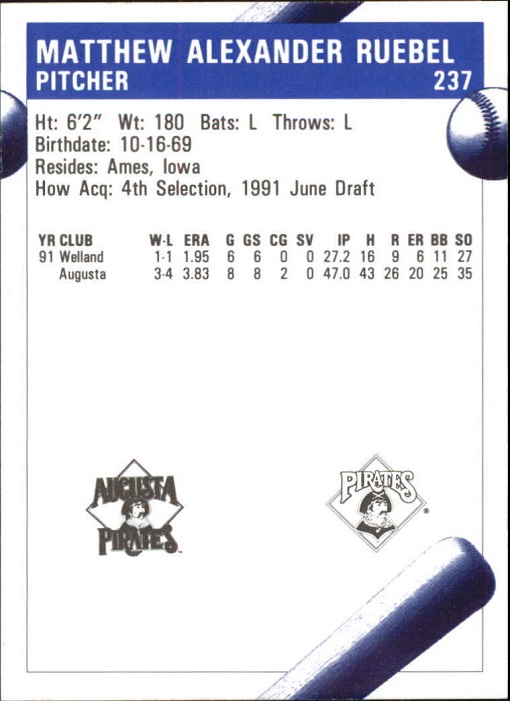 The backs of old ProCard sets could be really boring and very generic, with black writing on a white background and not much else. Sometimes you would get sets sponsored by local businesses, while other times they would just have a lot of empty space. This set has a little more color, and some design carryover from the front. I really like the logos on the card for the team and the parent club. Augusta really went along with keeping the same look as the Pirates, both with the uniforms and the logo. It’s just one card, but it appears that the quality control of the printing with Fleer tagging along was much better this year

If you’re interested in this card, you don’t have a lot of options. There are three up and the cheapest one is $5 delivered. All three listings have high shipping charges. The entire 29-card team set can be had for $10. A few big league players are in the set, with the most notable being Tony Womack. I’ve seen the set a few bucks cheaper in the past.