To celebrate the anniversary of the Pittsburgh Pirates winning the 1925 World Series, I decided to feature a player from their team who hasn’t been in the Card of the Day series yet. I’ve covered a lot of them already, and not all of the players from that squad have cards available. I decided to settle on pitcher Vic Aldridge. He went 15-7, 3.63 in 213.1 innings during that 1925 season, so you could say he was a key member of the title run. He even won game two and game five of the series, helping send it to a game seven. Aldridge started that final game, but he got knocked out in the first inning. The Pirates ended up winning anyway, defeating the greatest pitcher in baseball history (Walter Johnson, as if you didn’t know).

Aldridge was also part of the 1927 team that went to the World Series, picking up 15 wins that year as well. This set I’m featuring today is labeled as a 1927 set. However, Aldridge was with the Pirates until  being traded to the New York Giants for Hall of Famer Burleigh Grimes on February 11, 1928.  The W560 strip card shows Aldridge wearing a Pirates cap, but he is labeled as being with the Giants. There is another card of a player with Pirates ties, Tommy Thevenow, who didn’t join the team he’s labeled as playing with (the Philadelphia Phillies) until December of 1928. So the set was probably released in 1929, but there’s a possibility it was Christmas time in 1928 as well.

I decided to use this card for Aldridge because he is pictured with the Pirates. His other option is the Conlon Collection set and you just read about that set days ago, so I didn’t want to go back to it so soon. Here’s a look at the W560 set, featuring Pirates/Giants pitcher Vic Aldridge. 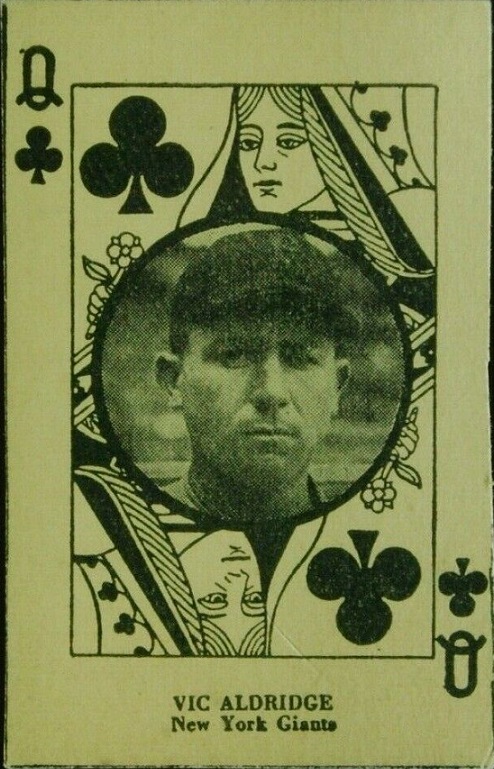 This card has the look of your typical strip card. You can see on the side/bottom that there are black guide lines for cutting purposes. However, these cards came in a sheet of cards. Strip cards came in literal strips, side-by-side, sometimes ten across. The sheet had various types of cards similar to a playing deck, but not all of the cards fit the same mold. Some are jokers and some of the cards aren’t baseball players. Aldridge, who you can see wearing a Pirates cap here, is always the Queen of Clubs on his card. The cards are usually either all black or all red, but you can find black and red as well. The backs of all of the cards are blank, so there isn’t a lot here on the players. Just a name, team name and small image. These cards measure 1-3/4” by 2-3/4”, so they are smaller than normal sized cards you find today, which means that photo you see is really small.

This set is not a popular one, but the cards of players like Babe Ruth or Lou Gehrig are popular compared to the rest of the set. They are also cheaper alternatives for those players, because most of their cards are extremely expensive. Despite being a hero for a World Series team, Aldridge is a common player. There’s only been one recent sale for his card on Ebay and it went for around $35. I found two older auctions (2018 and 2020) and they went right around $30 each. There are no active auctions, so you’ll have to wait on this card. My guess is that not many people are interested in this set, so there are other options for Aldridge if you want one of his cards from his playing time, or you can go for the Conlon card, which is easy to find on Ebay.