Today’s Card of the Day subject was here just two months ago, but I brought him back because it’s his 76th birthday and I really like this particular card. Al Oliver played for the 1968-77 Pittsburgh Pirates, putting up numbers on offense that place him among the top 20 hitters in team history. He was a three-time All-Star in Pittsburgh, who received MVP votes in five of his ten seasons, while also finishing second in the Rookie of the Year voting during his first full season in the majors. He hit for average and showed some extra-base power as well, leading to a .789 OPS in 1,302 games with the Pirates.

That was the main part of Oliver’s career, but he still played another eight more seasons outside of Pittsburgh. He added four more All-Star appearances, a batting title, three Silver Slugger awards, and five more seasons in which he received MVP votes. With his resume, it’s no surprise that Topps keeps going back to him when they insert cards in post-career products. One of my favorites is from the 2004 Topps Chrome set in which they included an autographed card of Oliver.

I don’t collect many autographed cards, and I’m not old enough to have seen Oliver play, but I knew who he was at a young age. So when he did a signing at a show when I was around 6-7 years old, I bought three old Pirates cards and got them all autographed. Eventually I got all of his 1969-78 Topps cards signed and I have a little display for them. This 2004 Chrome card definitely has the look of a card that belongs with the others. 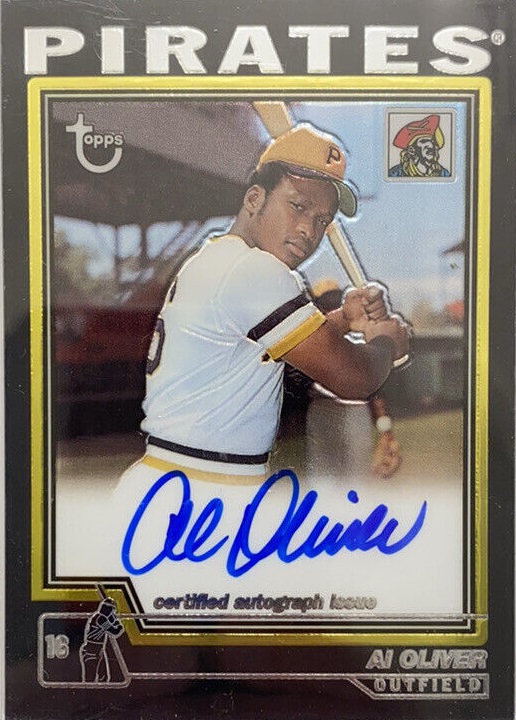 There’s a lot that I like here. That’s a great shot of Oliver in the old uniform. I’m a big fan of his autograph, which I can say without a doubt is better than 99.9% of current player autographs. I love that Topps went with their old logo in the top left of the photo, then doubled down with the old Pirates logo. Yes, it doesn’t match up to when Oliver played for the Pirates, but I’m still a fan. It’s a throwback within a throwback. The other thing here is that I just like the design of the set, especially the bottom left  with the outline of the pose in the photo, as well as his #16. This is really a stellar card. No complaints about the front, and only a small one about the back, which I think many people will agree with me is an issue… 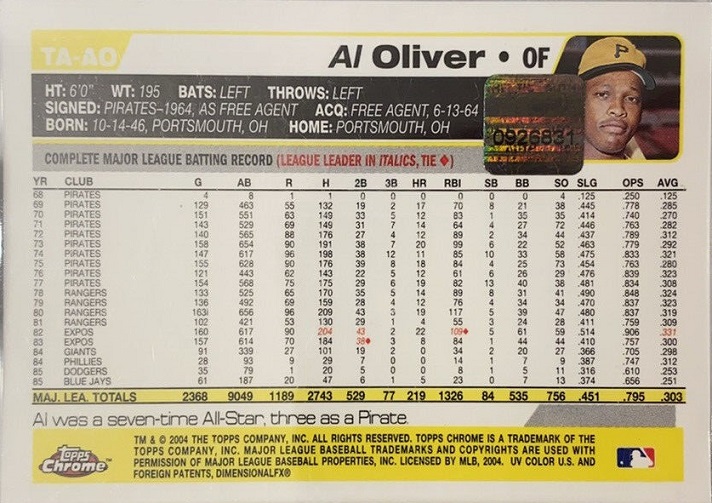 I really like the who look of the back except one detail that seemed avoidable. The writing is small, but that’s what happens when you include the entire career of someone who played 18 seasons in the majors. At least they did black writing on a white background, which makes it much easier to read than some backs from Topps over the year. The fact that they went with Pirates colors on the back is also a plus. A second photo of Oliver is a nice touch BUT that’s where the issue is. That hologram logo partially covering up the picture seems like it should have been avoided. The hologram is necessary because it’s autographed, but the size of the hologram doesn’t have to be standard. It definitely looks out of place there.  Other than the hologram placement and/or size, this card is near flawless in its design, so I can live with it.

If you’re interested in this card, there are currently 12 of them on Ebay right now. One of them is massively overpriced, while the other 11 range from $14 delivered to $32, which comes with a best offer option. Four of them have sold in the last three months and they have all been in the $10-$20 range.