I realized while scanning through cards of Bob Bailey that I don’t hate the 1965 Topps set, I just hate what they did for the Pittsburgh Pirates cards. Today’s Card of the Day comes from the 1965 Topps set, which I have featured here just once in the last two years. Bailey spent five seasons with the Pirates, and he appeared in five sets. Exactly two years ago today, we took at look at his 1964 Topps Giants card, which was a larger card, not one picturing his with the San Francisco Giants. I’m featuring him here again today because it’s been two years since his last appearance, and because he was born 80 years ago today.

I figured it was about time we looked at the 1965 Topps set again, but it was really other cards in the set that caught my eye. In particular, I saw some Kansas City A’s cards and Baltimore Orioles cards and thought to myself that they don’t look that bad and maybe I’ve been too hard of the set. Then I remembered that Topps just decided to give teams random colors and for some reason, the Pirates and New York Yankees ended up with pink cards. I don’t understand why they thought that was a good idea, but it looks awful for both teams. Unfortunately, we can’t make fun of the Yankees cards because they did the same thing to the Pirates. Anyway, here’s a look at card #412 in the set featuring Bob Bailey. 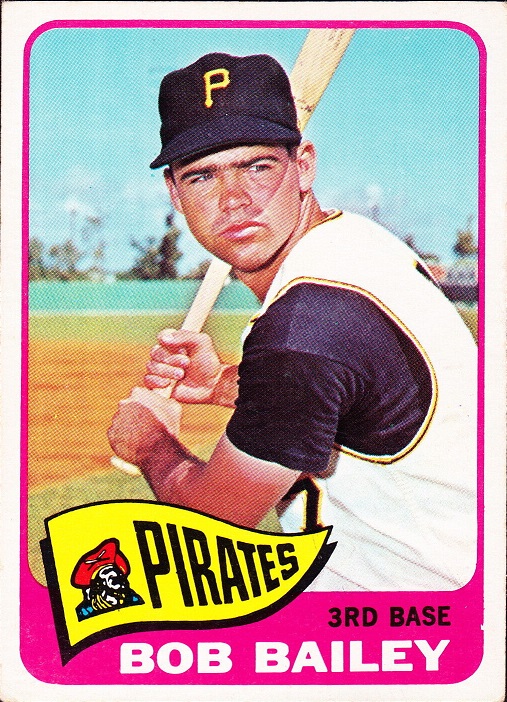 Here’s what I like about this card. You get a nice shot of Bailey, who was probably 21 years old when this photo was taken. These vest jerseys are interesting because I don’t really like the look of them without the black undershirt to complement the look. That particular cap will always look good, as I don’t see the Pirates ever going away from the black & gold look…at least I hope not, though I really wish they would change the current logo. Speaking of logos, the other thing I like (love actually) about these cards is the pennant there. You get Pirates colors and they went with the old logo. That logo was gone for seven years before this set came out. They went with that overly cartoonish pirate logo look, which would have been better for those inept early 1950s teams. That pirate on this card means business. 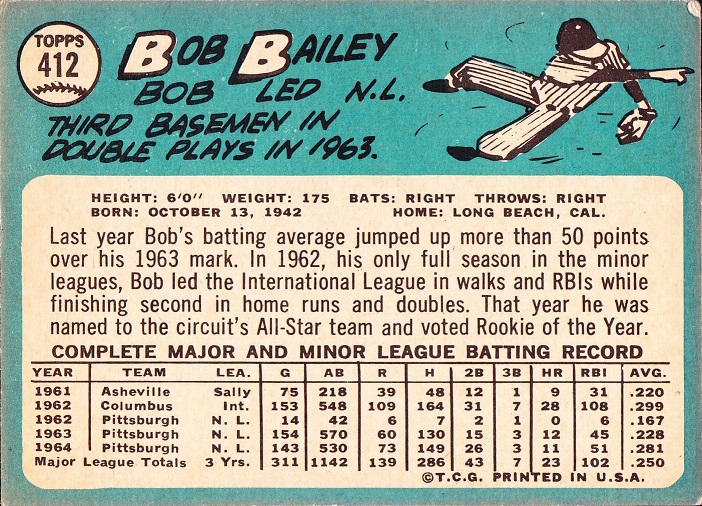 I’m a fan of the 1965 Topps backs. The coloring is good, which makes everything easy to read. They also included all of his minor league stats, which obviously wasn’t much, but still always appreciated. He was in the majors before his 20th birthday, and he never returned to the minors. He put up big power numbers at a young age in Triple-A in 1962, then didn’t approach those numbers until eight years later when he was with the Montreal Expos. Bailey had a really nice 17-year career on the majors, compiling 28.7 WAR during that time. By the way, I have no idea what Generic Gray Topps Man is doing on this card. Why is he in that position, and why did he wear pinstripes when he decided to portray Bailey?

If you’re interested in this card, then you can go to Ebay and get one for as little as $3 delivered, though all of the ones in that price range have some condition issues, so you probably want to be in the $7 area for a nice one, ungraded of course. There’s a PSA 9 for $130, and just a half grade lower, you can get it for $65, with a best offer option. A PSA 8 is $36, and an autographed copy is $34, which is authenticated and in a holder. A PSA 7 can be had for $28.