Today’s Pittsburgh Pirates Card of the Day features a Hall of Fame player who not many Pirates fans know that he actually played for the team. The Pirates made one of their biggest judgement errors in franchise history, ranking up there with the Kiki Cuyler debacle/trade, when they let Joe Cronin go at 21 years old without giving him a real chance. He went on to have a Hall of Fame career as a player, and for a large majority of that time, he was also the manager.

All the Pirates got in return for Cronin was a meager sales price to a minor league team. Three months after that sale, he was back in the majors for good, on his way to putting up 64.5 WAR over 2,074 games at shortstop. For comparison, Derek Jeter had just 6.8 more WAR in 673 more games…and he wasn’t the manager either. The Pirates have the two greatest shortstops all-time in Honus Wagner and Arky Vaughan. If anyone thinks that statement is false, you are wrong. Cronin wouldn’t be third best on my list, that’s Cal Ripken (Alex Rodriguez was trending towards second best until the whole steroids thing), but Cronin is definitely top ten. If you want to include the managerial part, he makes a strong case for #4 on that list.

Cronin played 50 games with the Pirates over two seasons, so you can imagine that it’s tough to find anything for him with the team. There are no cards from that time (1926-27 seasons), but in 1991, The Sporting News put out a large set of cards using older photos from the Charles Conlon collection, and he took some photos of Cronin during his time with the Pirates. One of those photos ended up on the 1991 card, so 46 years after he retired as a player, we got a Pirates card of the great Joe Cronin. He is card #50 from that set, which just happens to match the amount of games he played while in Pittsburgh. 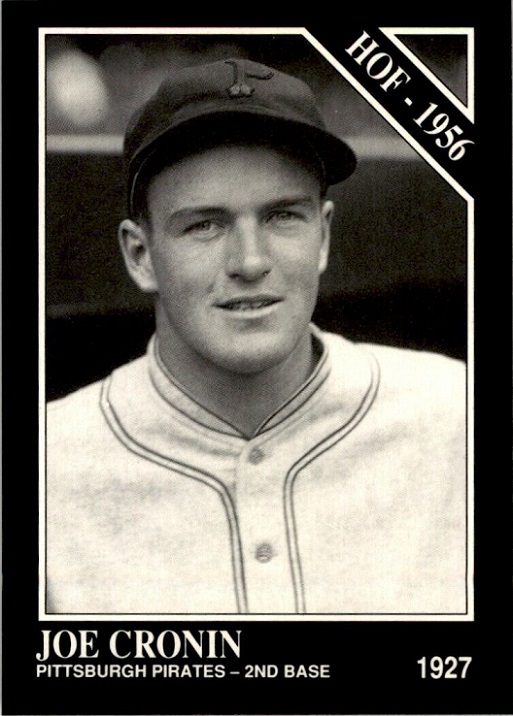 I am a big fan of this set because of the great old photos, but they also have a nice look. It’s basically the opposite color of a lot of plain sets you see that all used the same idea. Instead of a white border/black lettering and box around the photo, they used black border/white lettering and box. Still a simple design, but it’s different.

This is a photo of a 20-year-old Cronin. The 1927 in the bottom corner is the year of the photo, and all of the cards in the set are labeled with the year in that spot. As you can see, he is labeled at the bottom as being with the Pirates, matching up to the photo, even though he had a much better career with the Washington Senators and Boston Red Sox. You might also notice that he’s listed at second base. Not only did the Pirates get rid of him too early, they had him playing second base instead. He was the best defensive player at any position in the American League in 1930, 1932 and 1933 according to modern metrics. The Pirates made the World Series in 1927 and Cronin was with the team for the entire year and he was healthy for the entire year. Keep that last sentence in mind as you see his stats on the back for 1927… 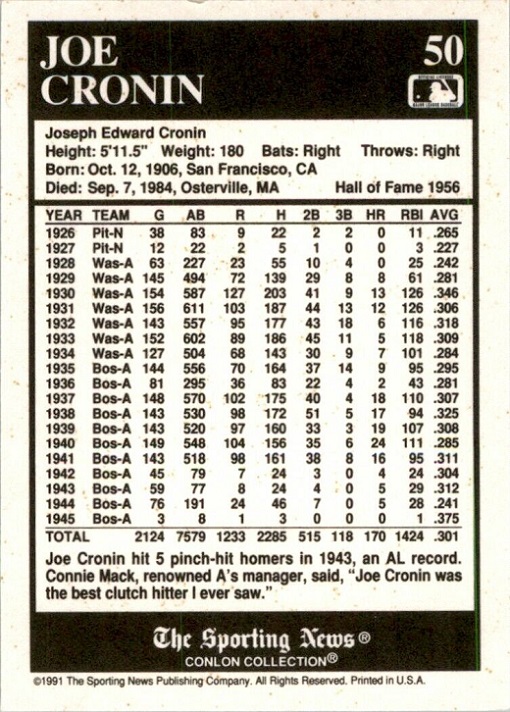 As you can see, Cronin put together quite a career, and as you look at those stats, remember that he was not only a great glove at shortstop, but he was also the manager. Also, those 1927 stats are legit. He had 22 at-bats in a full healthy season, which clues you in why they couldn’t get any trade value from him. Imagine knowing that the Pirates could have had Cronin and Kiki Cuyler going forward just by not making any horrible decisions, but they gave them both away. Those 1930s teams would have been different. We probably wouldn’t be calling them five-time World Series champs now.

If you’re interested in this card, there are plenty of cheap options on Ebay right now. Multiple sellers have this for $2 delivered, some slightly under that price. There are no special auctions, so basically just watch the shipping charges before you purchase. Happy collecting!