Today’s Pittsburgh Pirates Card of the Day takes a look at the 2007 Upper Deck card of Shane Youman. He played 15 years of pro ball, plus five off-seasons of winter ball, pitching a total of 1,766.1 innings during his career, while doing some of his work as a reliever. His big league career, which was spent just with the Pirates, including partial seasons in 2006 and 2007. He totaled 79 big league innings over 11 starts and ten relief appearances.

Youman played at the right time to be included on baseball cards. Despite a brief career, there were plenty of options for this article, and that’s not including variations of cards, as you will see in the pricing section below for his 2007 Upper Deck card. I chose the base version of that card because I thought it looked the best. So here’s card #412 of Shane Youman from that set. 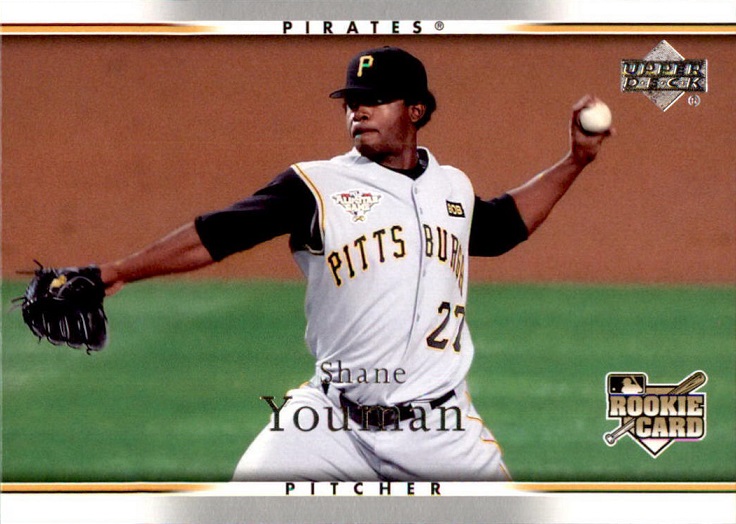 I picked this card because of the horizontal layout, but also that Rookie Card logo in the bottom right also caught my eye. I’m a big fan of horizontal layouts on cards. This card has two specific reasons I like it more, one of them being related to the photo and the other to the design of this particular set.

Upper Deck had a second card of Youman from 2007  for their Premier cards in which they used the exact same photo, but they put it on the normal vertical setup you see for 99% of cards. That layout cuts off half of his right arm (everything from the end of the sleeve down to his glove is missing) and you don’t see the ball in his hand either. The same picture on the horizontal layout looks much better.

The other one specific to this set is the writing for “Pirates” above him and “pitcher” below him. That writing/design is exactly the same as you see here on the vertical cards, so if you wanted to read it the right way, you would have to turn the cards on the side. I’m not a fan of writing top to bottom on cards in general, but usually it is written so you can read it without turning the card (meaning the “P” for pitcher/Pirates being the top letter, not the bottom letter when held vertical). With the horizontal layout, which I didn’t see on many cards while scrolling through photos, I really like the look of this set, especially for Pirates players. They actually used the horizontal layout for three other Pirates I saw, and all three were pitchers with poses similar to this one.

This jersey being worn by Youman has two identifiers for the year, with the second one getting even more specific. The All-Star jersey on the left side of the photo (his right side) was for PNC Park hosting the 2006 All-Star game. The “BOB” patch on the right side of the photo is in honor of Pittsburgh mayor Bob O’Connor, who passed away on September 1, 2006. The Pirates began wearing a patch when they returned home from a road trip on September 11, 2006. Since Youman only pitched one road game after that date, then you can tell that this photo was taken on September 21st, when he pitched against the Los Angeles Dodgers. 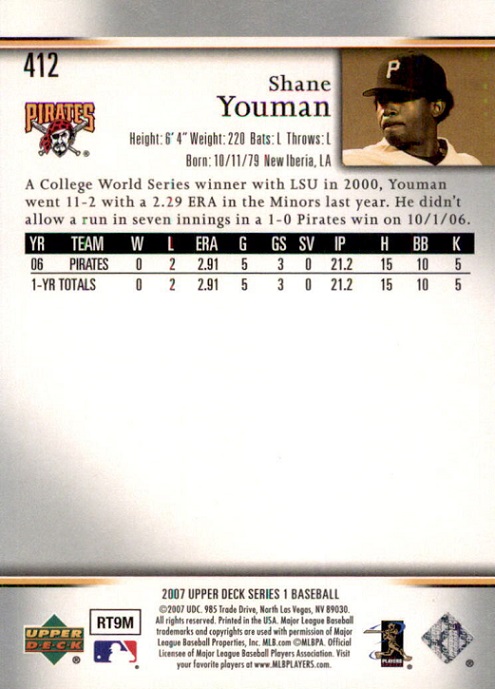 Upper Deck really dropped the ball here. I actually really like the look, keeping the same style as the front, but they included one year of stats for Youman, and then just half the card is nothing. The guy had six lines of minor league stats they could have added and there still would have been some blank space. How about some added facts on the player? They went with the bare minimum here and moved on to the next card. The other thing I don’t like is that the second photo of Youman on the back is just a cropped version of the first photo. They used a different photo on the back of his Premier card, why not here?

If you’re interested in this card, you can get it from multiple sellers for under $2 delivered. As I mentioned up top, there are other variations of the card. There are green and blue “Predictor” versions, which have a foil stamp and change the colors of the front and back to blue and green where it is gray here. Basically, they took away one of the reasons why I like this card, and that’s because it matches up to the uniform. There’s also a “First Edition” one that does the same thing, along with having a special stamp. The only thing I like about that particular one is that he autographed one for a fan and the price is cheaper than some people are selling the card without the autograph. The three variations aren’t expensive, running about $5 each.