I don’t cover enough new cards in this series, but that’s because I try to avoid current players. This is a history site after all, so it seems better to focus on the past. I’m including a brand new card today with a history twist. Today is Andrew McCutchen’s 36th birthday. Most of you remember him fondly as the man who played center field for the 2009-2017 Pittsburgh Pirates. He’s one of the greats in team history, especially if you limit your look over the last 30 years, then no one outside of Brian Giles really compares to him. Even with Giles averaging slightly more WAR per season than McCutchen in Pittsburgh (5.2 vs 4.5), McCutchen played nearly twice as many games for the Pirates.

Today’s Card of the Day is from the 2022 Topps set, and yes it includes a photo of McCutchen with the Pirates. He has so many card options with the Pirates that I’m not going to feature him on another team in this series ever. Topps put out 35th anniversary cards this year, celebrating the 1987 set, which is one of my favorite sets produced in the last 40 years. It could be #1, but I can say without a doubt that it’s top three. Here’s a look at the Andrew McCutchen All-Star card from the 2022 Topps set. 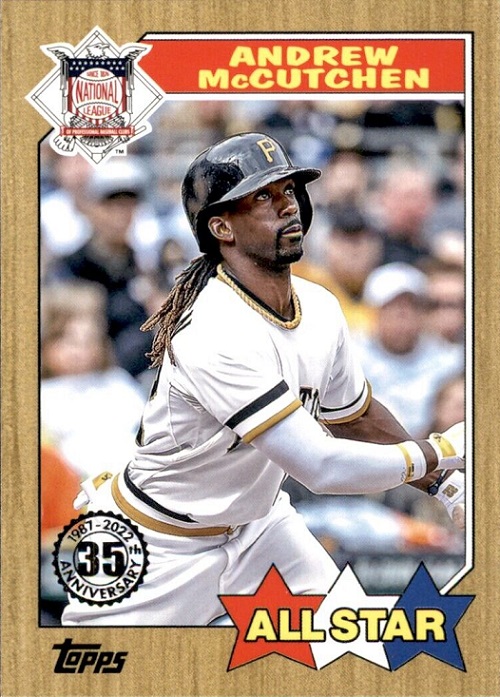 This card has the same exact design as the All-Star cards from the 1987 Topps set. You have the wood-grain border that makes this set look so great. You have the player’s name up top in a red box and yellow writing, and you have “ALL STAR” written out in red, white and blue stars at the bottom. The National League players had their league’s logo, which you see here, while the American League players had their own league’s logo.

The bottom left of the photo has the 35th anniversary logo from Topps, letting you know that this is the 1987 design (you should know that already). That’s the main difference between these cards and the old ones (besides the player choices obviously). There’s one other small difference that works in reverse of the way things usually go now with throwback cards. Notice the Topps logo in the bottom left? That’s also there in 1987, except back then they had a trademark (TM) after the name. I hate seeing the copyright/trademark/registered trademark symbols included now where they weren’t used before, usually after Pirates or with the Pirates logo, but this card goes to other way.

I like this card, even though it could be so confusing to someone who didn’t know better. Why does a 2022 card show 2009-17 Pirates outfielder Andrew McCutchen on a 1987 design? It looks good, that’s all you really need to know. 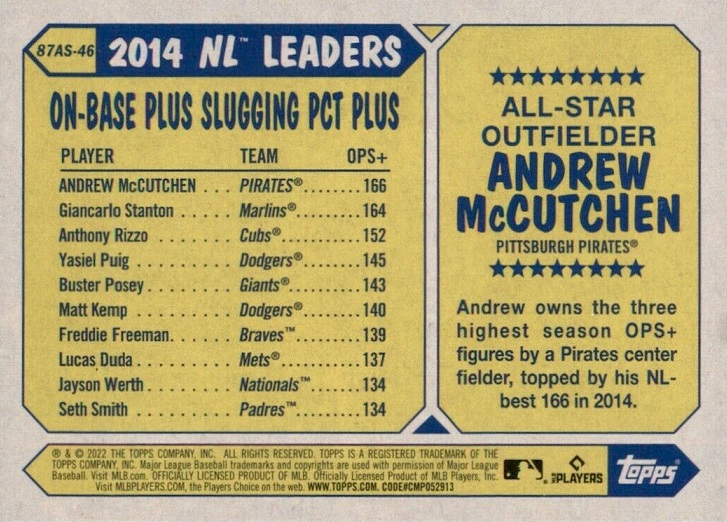 As if the three different years coming together as one on the front wasn’t odd enough, add in that this card targets the 2014 season on the back, and they use a stat that definitely didn’t exist in 1987. Right away you see those added trademark logos I mentioned and there’s so much legal stuff on the back here between those and the extra writing on the back. There’s even one with the Topps logo in the bottom right, what gives there? We get it Topps, copyrights/trademarks are important, but how about one that covers everything on the back and stop cluttering up a good card.

This back uses the same design as the 1987 Topps set, both in color and the setup on the back with a row of stats and a small blurb about the players. One thing I like so much about the 1987 set is that the backs have a good look too. We just recently looked at a 1971 Topps throwback design and I love that set with the black border, but the backs are just awful to read. The 1987 backs work well with the front.

If you would like to purchase one of these cards, go to a site called Ebay and you will find about 100 of them for sale. There are also variations of this card, but I’m not a fan of any of them because they drastically change the look of this card, changing the border color, which is what makes this card so great in the first place. I actually saw a variation first while scrolling through scans and skipped it.

You can get this card as seen above from numerous sellers for under $2 delivered. If you want to go for something harder to find, despite ruining the look, you can get a blue border version for about $3-$4 delivered. There are also ones with black borders (299 copies) and gold (75 copies) that will run a little more, but none are available right now. A red bordered one is limited to ten copies and the only sale I found was two months ago for $25.