Today’s Card of the Day article features Starling Marte, who played for the 2012-19 Pittsburgh Pirates. He turns 34 years old today. He has appeared in this Card of the Day series just once before, when he was featured exactly two years ago today on his 2015 Topps Archives card. That set used a throwback design to the 1976 Topps set, so I decided to use a card where the design and photo were as new as you can get at the time. This is a look at the 2017 Topps Now card of Starling Marte, which was card #27 in the set. 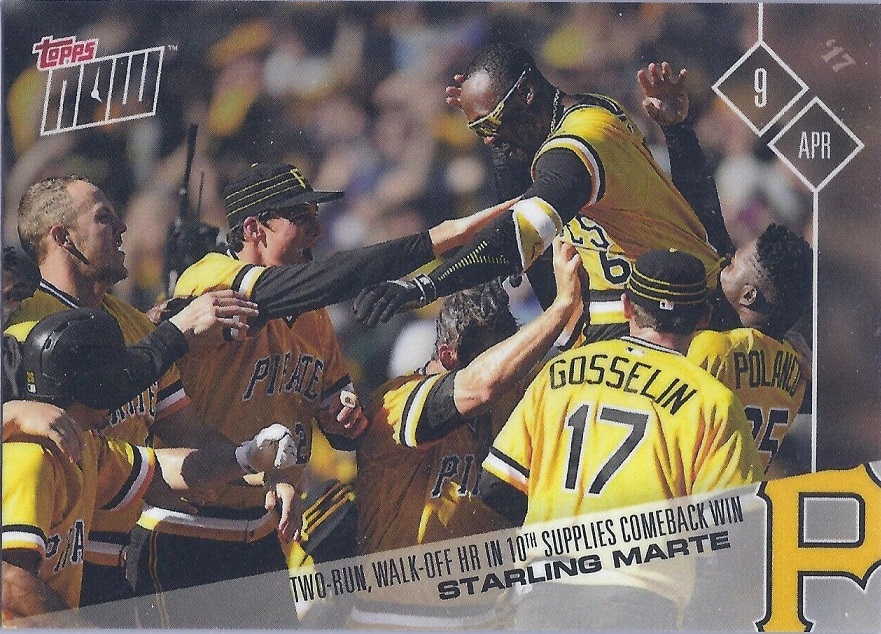 If you are unfamiliar with the Topps Now series, let me explain how new this photo of Marte celebrating was when it was released. On April 9, 2017, he hit a two-run homer for a walk-off win. That part is mentioned at the bottom of the card, right next to the Pirates logo, while the date is in the top right corner. On April 10th, Topps shared a photo of what this card would look like, then gave collectors 24 hours to buy as many of these cards as they wanted. Many bought extra because the bulk discount allowed them to make money off of the cards. The bulk orders also gave people a chance to get one card cheaper than you could get it directly from Topps. Instead of buying directly, they got them from sellers. I did this multiple times and all you lose out on is a cool holder from Topps.

After the 24-hour time period lapses, then Topps prints the exact amount of cards that were ordered. So this picture of Marte celebrating with his teammates (including Tyler Glasnow, Jameson Taillon, Gregory Polanco and who could forget Phil Gosselin) was about 48 hours old when it went to print. Imagine if this was a west coast night game. Those were going to print in about 36 hours if they celebrated walk-off hits.

It’s an interesting concept because the selling prices of these cards will occasionally work in reverse of the popularity. A popular player could have thousands of cards ordered and his card becomes easy to find. The sellers compete against each other and it keeps the prices down. However, a card that didn’t sell many copies during the 24 hours then becomes a rare card, and suddenly a card no one wanted turns into a card people try to get for their collection. Topps will announce the print runs for each card after the 24 hours ends. 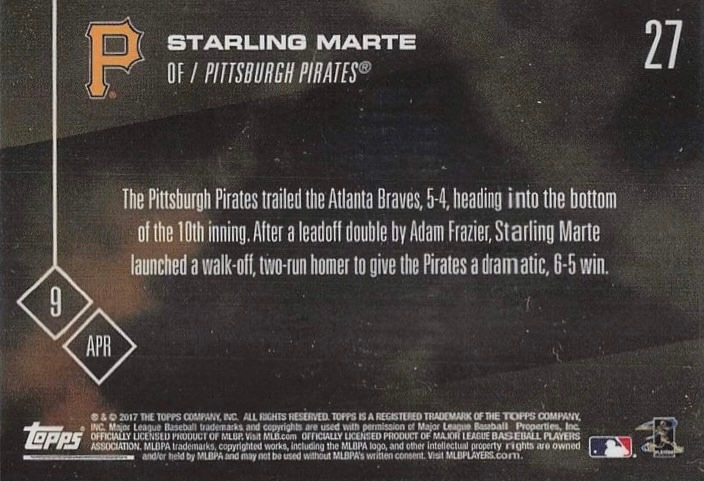 The back of these cards gives you some extra details on the reason that they decided to print that particular card. They only printed a few each day back then, usually 2-3 card choices if I remember correctly. I collected all of the Pirates cards during the 2017 season, but switched to collecting the Living Set cards of Pirates in 2018. I thought there would be more Pirates cards to buy from that set, otherwise I may have kept on collecting both. The date is added on the back as well, along with another logo and the basics for each player.

If you’re interested in this particular card, it has a somewhat low print run of 330 copies. There are much lower print runs, including a Player’s Weekend card of Marte that only had 148 copies ordered. I liked the picture on this one better, especially with the old school uniforms. This card #27 can be had for as little as $4.55 delivered, which actually has a best offer option as well. The next cheapest is $4.99 before tax.