Card of the Day: 1974 Topps Danny Murtaugh and Coaches

Pittsburgh Pirates manager Danny Murtaugh was born 105 years ago today. He was recently inducted into the Pirates team Hall of Fame and his two World Series titles and five postseason appearances gives him a strong resume for Cooperstown.

Murtaugh has appeared in this Card of the Day series two times already. The first appearances was on his 1948 Leaf card. That article was posted two years ago today. The second appearance was way back in January of 2021, when I shared a 1964 Topps card that featured him and Bill Mazeroski. Today’s third appearance is another one with company, and it includes Mazeroski again. They are also joined by Bob Skinner, Don Leppert and Don Osborn. It is card #489 from the 1974 Topps set. 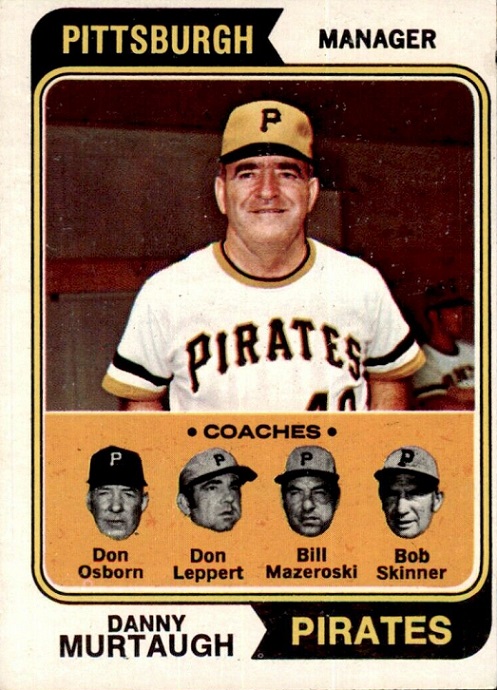 I’m a fan of the 1974 Topps set because they used team colors in the front design. It’s not a great overall design, but it’s mid-range good and the set is helped by the use of action shots on many cards, even if a lot of them had poor photo quality. I’m a big fan of the Carlton Fisk card in the set, which is a great example of a terrific action shot, not so great photo quality. Murtaugh was a manager, so you don’t get too many managerial action shots. I don’t know who it is, but I like the random Pirates player sitting in the dugout behind him.

Even though Murtaugh is named on the card, this is clearly a coaching staff card, which is even more obvious when you see the back.  I am not a fan of the floating head style cards and I know from some past comments that other people don’t like it either. I believe the word “creepy” was used more than once to describe it. Mazeroski had just recently retired before joining the coaching staff, while Skinner last played in 1966. He was on the coaching staff when they won it all in 1979. Leppert last played in the majors in 1964, and he wasn’t around for the 1974 Pirates coaching staff. Osborn never made the majors, but he did put in 20 seasons of pro ball and he was credited with 199 wins. He was on the coaching staff three different times. Technically it was four times, but after he was hired late in 1978, he became ill and resigned, then passed away before the start of the 1979 season. 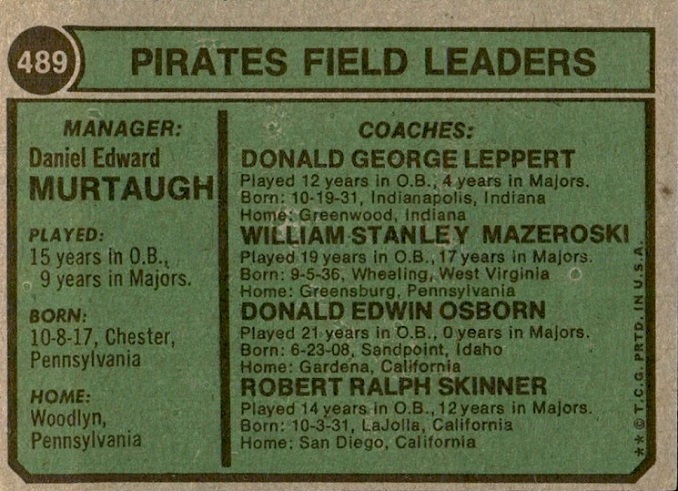 These 1974 backs might be the worst to try to read due to dark writing on a dark green background. In hand, this particular card is rough on the peepers. Each coach here has a list of how long they played pro ball, how many years in the majors, when and where they were born, and where they lived at the time. I thought it was odd how they decided to designate their years in pro ball with “O.B.”. Took me about ten seconds to realize that it was short for organized ball. Osborn is not only the only player here who never made the majors, he’s also the only one who didn’t play for the Pirates. This card says he played 21 seasons, but Baseball-Reference has 20 listed. Skinner just celebrated his 91st birthday a few days ago.

This card is plentiful on Ebay, which means you can get it cheap. Even with Mazeroski on it, and a potential Hall of Famer in Murtaugh, the price doesn’t reflect their fame. Throw in Skinner (no offense to the other two) and you can get some big names from that era for $2 delivered in nice shape. There’s an authenticated autographed copy of this card by Murtaugh going for $165 or best offer. That’s gotta be tough to find specifically on this card because he passed away in December of 1976. There are no other cards of note, so basically, just check the grade and shipping charges if you want one. You have over 100 choices and plenty of them have reasonable shipping fees. For reference, a PSA 9 recently sold for $27, in case you want to wait for a high grade copy.