Today’s Pittsburgh Pirates Card of the Day comes from one of the more obscure Hall of Famers in team history. He’s not obscure in the sense of him being a virtual unknown compared to other Hall of Famers, rather as someone not many people realize that he played for the Pirates. Chuck Klein made his name as a member of the Philadelphia Phillies, where his five-year run from 1929 through 1933 is one of the best hitting displays in baseball history for a five-year period.

Klein won an MVP one year during that stretch and pulled off a Triple Crown in another. Most people either know his name from the Hall of Fame honor, the Triple Crown honor, or the fact that he hit four homers in one game on July 10, 1936. He had a season with 250 hits, 170 RBIs and 445 total bases, which are three of the best totals in those stats ever. He won four home run titles, and he hit 40 homers during the season he didn’t lead the league during that five-year stretch. He’s the only man in baseball history with 103+ extra-base hits in two seasons, and his total of 107 in 1930 has only been topped twice, once by Babe Ruth and once by Lou Gehrig. He led the league in OPS twice, and those were only his third and fourth best seasons in that category during that stretch. Various injuries slowed him down in 1934 and beyond, but in 1941, he became just the second National League player ever to hit 300 homers.

Klein played for the Pirates during the second half of the 1939 season, and he has a unique situation that ties into this set. The only other time that we have covered the 1979 TCMA Renata Galasso set is when we looked at the card of Heinie Manush. Like Klein, Manush wasn’t around Pittsburgh long, so his card options showing him with the Pirates are very limited. Klein has been featured here in this series once for his 1939 Play Ball card, and even that comes with an asterisk. The unique tie-in between the two comes from the day Klein joined the Pirates. Pittsburgh released Manush to sign Klein, meaning they got rid of one Hall of Famer to sign another. Manush got the last laugh I guess (for lack of a better phrase) when he made the the Hall of Fame first. Unfortunately, Klein had passed away 22 years before he was elected in 1980, while Manush got to enjoy his Cooperstown honor for seven years, passing away in 1971.

The two Hall of Fame outfielders now have a more pleasant connection than the tie-in with the Pirates, as they will be the first and second cards featured from the 1979 TCMA Renata Galasso set. 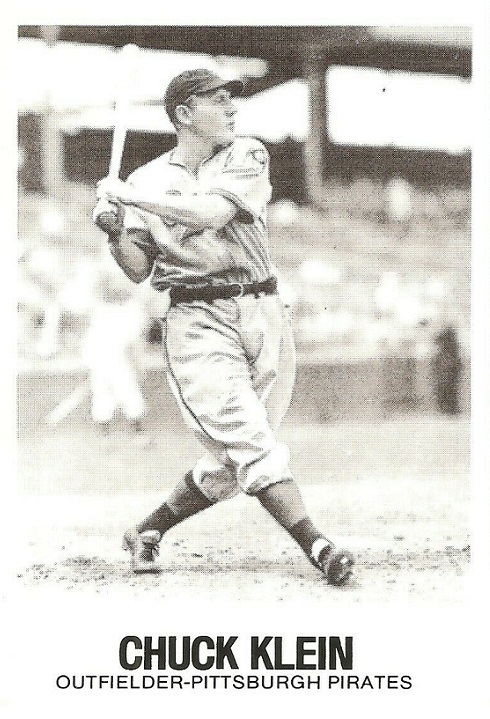 As you can imagine, images of Klein with the Pirates are rare. He was with the team for three months in 1939 and Spring Training of 1940, before being let go. This is a great image, even if you can’t see the Pirates word written out on the jersey. There’s one giveaway to the year of this image. Check the left sleeve and you see a patch. That was the centennial patch, celebrating 100 years of baseball, based on the Abner Doubleday story/myth.

This set used a very simple design. Black and white photo, white borders, black writing. No fancy letters, not even a thin black border around the photo, separating it from the outside border. No frills, no set logo, just straight forward, let the picture do the talking. 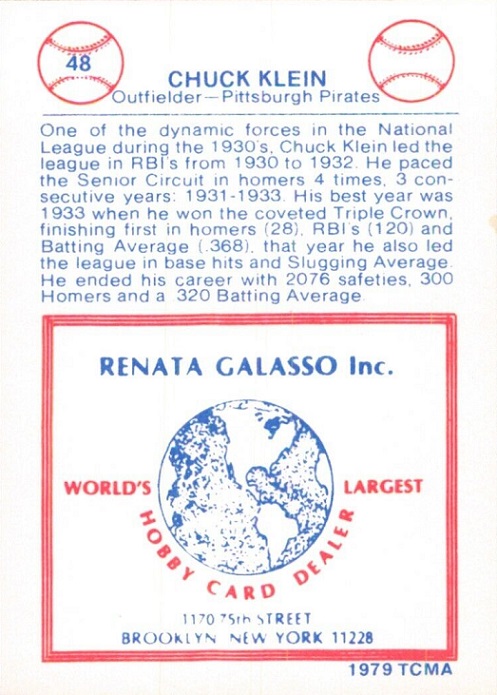 These cards have a mini bio, which gives you a summary of his accomplishments. I didn’t even mention the .320 career average up top. The bottom half of the card is an ad for a card dealer named Renata Galasso, Inc., which is where the set name comes from. They were an early card dealer, claiming to be the world’s largest, though I don’t know any part of a globe that looks like that, so they may have been the only card seller on a different planet.

If you’re interested in this card, Ebay has numerous options and they are cheap. One seller has two of them for $2 shipped. So you can buy one and give one to your friend Joe. Other sellers have the card for around $2 as well in case you only want one, so Joe feels jealous that you have a copy and he doesn’t.