Gene Clines, who played outfield for the 1970-74 Pittsburgh Pirates, passed away earlier this year at 75 years old. We had a tribute Card of the Day article at the time, featuring my favorite card of Clines. He has also been here for his interesting 1990 Pacific card, as well as his rookie card from the 1971 Topps set. I mentioned in that tribute article that I wanted to post a card that day because I didn’t want to wait until his birthday. Well today happens to be that day. Clines was born 76 years ago today.

The 2020 Topps Heritage set has two interesting notes in regard to timing and this particular card. I have no idea why Topps decided to start the Heritage set 49 years after the card design, when celebrating a 50th anniversary of a set each year would be a good selling point. People love round numbers and 50 is a popular anniversary for anything. They started with the 1952 set in 2001, but it seems like there are two simple solutions that were right there. Release the cards a year later, then capitalize on the 50th anniversary with every single new issue OR use the design Topps had in 1951. Many people don’t realize that Topps had two sets in 1951, so they even had a choice.

This particular card of Gene Clines is called a World Series Highlights card. In 2020, Topps was using the 1971 Topps design for the Heritage set (good ole 49th anniversary!). They decided to also include new 1971 World Series Highlights cards. Only problem is that the original 1971 World Series cards came in the 1972 Topps set, because Topps had yet to master time travel or predicting the future, so they had to wait to see how the 1971 World Series turned out before making cards. So not only was Topps celebrating an odd numbered anniversary with this 2020 Topps Heritage set, they decided to take cards from a different set and move them up a year. 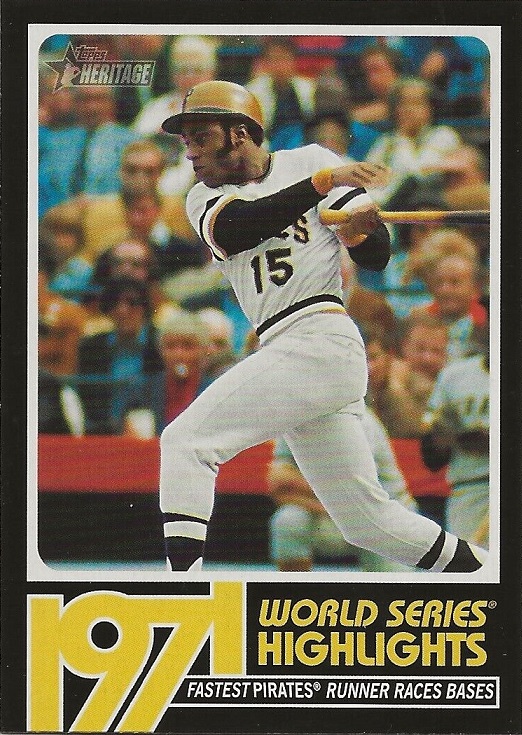 Despite questioning their choice of years twice, I really love the look of this card. It really has that old school feel to it, especially how they decided to write the numbers and “World Series Highlights”. That’s definitely a 1970s feel. Add in that the natural black border, along with the yellow/gold writing,  gives it a great Pirates feel, and this is truly a strong looking card. That’s a great action shot of Clines taken during the World Series as well. This card choice actually works so much better than it would have in the 2021 Heritage/1972 Topps tribute set because of the black border, so while it was an odd choice, it turned out great. 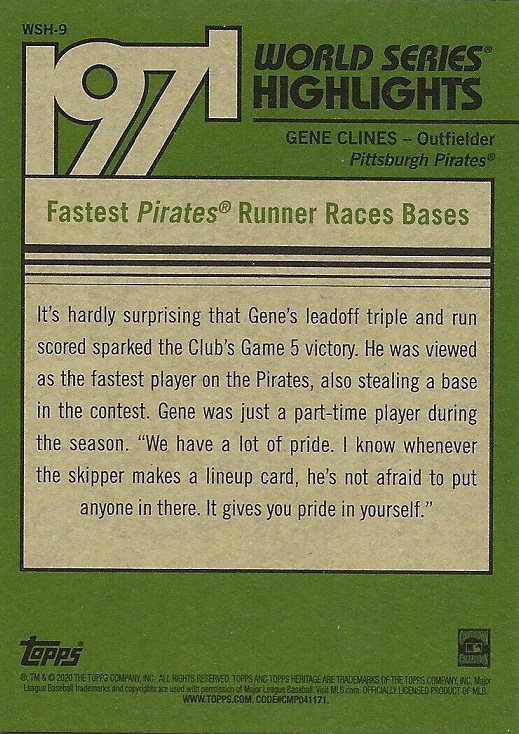 The fronts and backs of the 1971 Topps cards have such a different look and that carried over into the 2020 Heritage set. This back looks just like something that would be in the original set, along with the lack of regard for your eyesight. Even with the enlarged scan, these backs are tough on the peepers due to the thin writing and gray background. The card gives you a description of the play referenced on the front, as well as a nice quote from Clines. As it turned out, that triple was his only hit of the series. His only hit in the NLCS that year was a homer, so he made those hits count.

If you’re interested in this card, it’s not really a common card. It is in the sense that he wasn’t a star player, but this was from the high number series in the set, and not many examples are on Ebay right now. It’s not expensive, you just don’t have as many options as usual. You can pick one up for about $3 delivered.