Here’s another case of me tricking myself due to choice of scans for a player. I needed a photo of Claude Ritchey at some point a few years back and I used a scan of his 1906 Fan Craze baseball card. I’ve utilized that photo a few times over the years, so I fooled myself into thinking that I did a Card of the Day article about the card. I did not. So today we take a look at a rare card of Claude Ritchey while he was a second baseman with the Pittsburgh Pirates. He played for the team from 1900 through 1906, putting up 25.3 WAR during those seven seasons. That number ranks him 24th among all position players in team history, right between Brian Giles and Gene Alley.

I have only used the Fan Craze set here once before. Back in April we got our first look at the set with Deacon Phillippe. In fact, the back scan below is the same one from that article. You’ll see why when you see the back scan and description. These cards are unnumbered, so the checklist just goes alphabetical. They are similar in size to regular cards now, measuring 2-1/2” by 3-1/2”. Here’s a look at the 1906 Fan Craze card of Claude Ritchey. 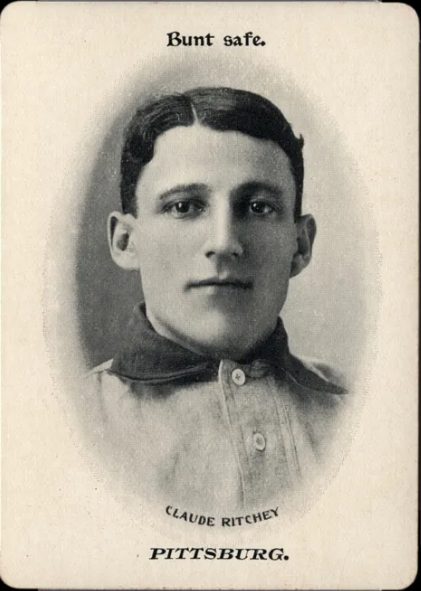 These cards are actually like a card from a regular deck of playing cards. You’ll think that even more so when you see the back. That’s a portrait of Ritchey in his Pittsburgh Pirates jersey. It’s a similar look to the famous Honus Wagner picture used for the million dollar T206 card because the photos were taken at the same time, just this one made it onto a card three years earlier than the T206 set was produced. Wagner is also in the Fan Craze set and it’s the famous photo being used. Ritchey is in that widely popular T206 set, but he’s pictured with the Boston Doves (current day Braves), and he was at the very end of his big league career when those cards were coming out.

Ritchey appeared in four card sets during his time in Pittsburgh and I don’t think I’ve ever seen one of those other three cards. I’m sure I’ll feature the others here at some point. His other two cards are a bit odd. They used the same photo in each (cropped different), and he’s dressed in fancy street clothes and looks a bit sad, almost like the mugshot of a dejected 1920s gangster.

These cards were part of a board game. The “bunt safe” was an outcome for the game. There were numerous outcomes throughout the 53-card set. According to my count last time, I found 23 different outcomes. Some didn’t make sense for every situation, such as a caught stealing, which could come up any time, even with no one on base. The spelling of Pittsburgh with no H at the end was correct for the time. 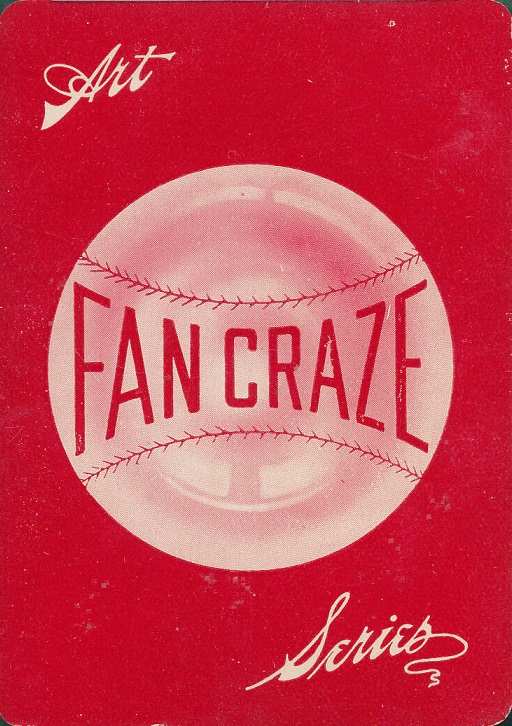 I believe you can figure out why I didn’t upload a matching scan for the Ritchey card. All of the National League players in the set had the same back, similar to a deck of playing cards. You got a red back, Fan Craze logo in the middle, and it says “Art” at the top and “Series” at the bottom. Fairly straight forward here.

If you’re interested in getting this card, they are not common. There is only one on Ebay right now and it is a PSA 8, which has an asking price of $275 or best offer. High grade examples of these cards are not uncommon due to the better paper stock and the fact that they came with rounded corners already. So despite being 116 years old, you can find these cards in high grade, it’s just that you can find the cards often in general. The prices for sold Fan Craze common cards are all over the place, so it’s basically up to you if you want to spend that much (make an offer obviously) because I found PSA 9 copies selling for less and PSA 7 selling for more.