Rip Sewell spent 12 seasons with the Pittsburgh Pirates, joining the club in 1938, and playing until 1949. He is one of the best pitchers in franchise history, possibly ranking in the top ten all-time for the club. He had back-to-back 21-win seasons in 1943-44. He was a four-time All-Star, and he received MVP votes in three seasons, finishing as high as sixth in the voting. Sewell won a total of 143 games for Pittsburgh, while pitching over 2,100 innings. Despite all of that success, he didn’t have a lot of cards printed during his playing days.

Sewell appeared in this series twice before, once on his own card. The first time was last May when we featured his 1949 Bowman card on his 114th birthday (he passed away in 1989). The second appearance was earlier this year on his 115th birthday, and that was an autographed card from Upper Deck that also included his more famous cousin, Hall of Famer Joe Sewell. They came from a family with four Major League players, as Joe’s brothers Luke and Tommy each made the majors. Luke actually played 20 seasons in the majors, so he did a little more than just “made the majors”.

Today’s article is the third appearance for Rip Sewell, and it’s on the anniversary of his release from the Pirates in 1949, which ended his playing career, but started his coaching career. I’m featuring the 1947-66 Exhibits set today. It’s a set that we have only looked at once before, when we covered the card of Frankie Gustine. As mentioned, there aren’t a lot of options for him, partially because he played during the war years when almost zero baseball cards were produced over a five-year span. He actually has just as many cards produced after his career was over, so we will have him back in this series again. 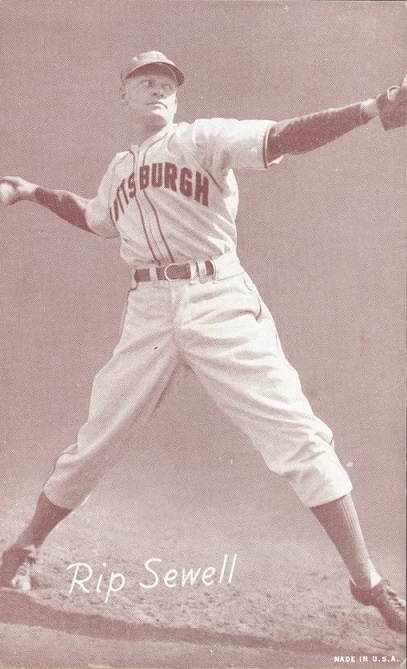 This looks like a staged action photo because he’s not giving a lot of effort here to deliver the ball, but with Sewell, he might just be about to deliver once of his famous eephus pitches. Here’s a YouTube link to a video of Ted Williams talking about hitting the pitch. This Exhibits set is a fascinating one because it consisted of 336 cards produced over a 20-year time period. We have covered plenty of other Exhibits sets here, but none of the others were like this one, though the look is similar. They all featured black and white photos with a little tint on some cards, as you can see here.

The cards in this set featured facsimile autographs, but for some reason, that didn’t happen on this card. We know Sewell knew how to sign his name because there are plenty of examples, yet his name is just written out regular here. These cards didn’t give you much info on the player. You can tell by this photo that Sewell played for the Pirates, but not every card was an obvious. You just got a name for the player, not even a position. The only other writing on the card was that “MADE IN U.S.A.” in the bottom right corner. These cards are also much bigger than your standard baseball card size now, measuring 3-3/8” by 5-3/8”. As mentioned above, the back is blank, so I didn’t include a scan.

If you’re interested in purchasing this card, there are some options on Ebay right now. There’s a graded one, a PSA 5, with a price tag just north of $200 delivered. The other three are priced at $80, $47 and $19, with a best offer option on the latter card. It just depends on the grade you want. The only sold one was low grade and in a lot of three cards. The total price was $15, so that should give you a hint of which price above is reasonable.