The great Maury Wills recently passed away at 89 years old. Whenever a former Pittsburgh Pirates player passes on, I put them in the next open date on the schedule for a Card of the Day article, as long as there’s a card of them available. This time I waited just a bit because Wills was born 90 years ago today, so what better day to remember him than his birthday.

Wills was with the Pirates for two seasons, joining the club in a December 1966 trade, before being lost to the expansion Montreal Expos right after the 1968 season ended. We have already featured his 1969 Topps Deckle Edge card, an oddball small set put out by Topps in which they used the same photo of Wills as the one they featured on his 1968 Topps card. That article was posted two years ago today. That left just a few choices for him and I didn’t want to use the 1968 Topps card because it’s included for comparison in that previous article. I’ll eventually get to it, but for now, here’s a look at card #570 from the 1967 Topps set, featuring Maury Wills. 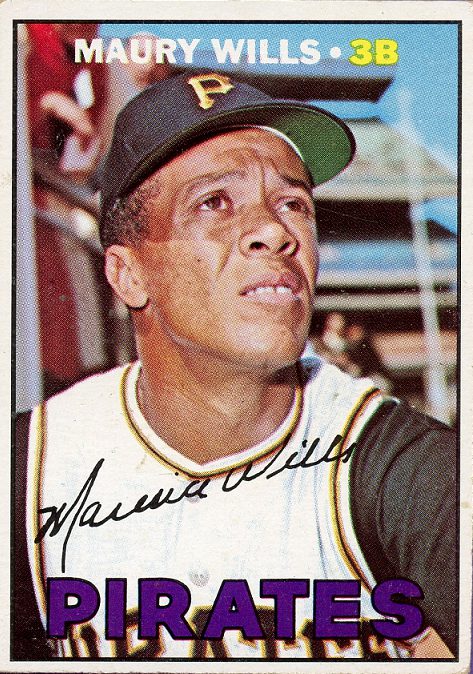 I am not a fan of the 1967 Topps set, and I really don’t like the design for the Pirates cards. For some reason, they decided that all of the Pirates would have that dark purple for the team name letters. It’s better than the pink they used for all of the Pirates in 1965, but at least that set has a better design. That purple letter idea looks even worse on this card because it’s basically covering up the team name on the jersey.

This card is interesting because they issued it later in the set, which gave them time to actually get Wills in a Pirates uniform, instead of using a photo of him on the Dodgers cropped close with no hat so you can’t tell it’s a different team. A December trade would have been way too late to get a photo if he was included earlier in the set, and it’s likely that if he was a first series card in 1967, it would have had him with the Dodgers. Timing is everything.

One really interesting thing here is the facsimile autograph. That’s his actual autograph, and not the ones you see on cards. You can tell by the first name. He signed Maury for fans, but this is the one he would use for official use since his first name was Maurice. 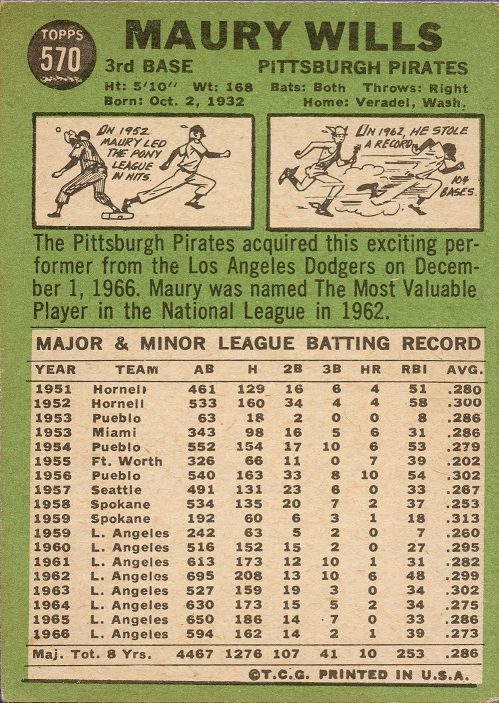 The backs aren’t as bad as the fronts. You get the cartoons with Generic Gray Topps Man, who has the versatility to play a small speedster like Wills, but he could also play a power hitter like Willie Stargell or a pitcher like Jim Bunning in the same set.

One note about the cartoon. When Wills stole 104 bases, it was thought that set set the record for steals in a season, topping the 96 by Ty Cobb in 1915. However, research at that time was incomplete, so he was just breaking the known record. Wills actually finished with the tenth highest total that season, well off the record set 75 years earlier, which still stands. But wait, isn’t Rickey Henderson the leader? Good question, but the answer is no. Hugh Nicol stole 138 bases in 1887, just no one knew that at the time. Just like when Nolan Ryan set the strikeout record for a season, he actually only had the eighth highest total for a season. When Babe Ruth hit his 26th homer in 1919, they celebrated him breaking Buck Freeman’s 1899 record of 25 homers in a season (Freeman was in on the hoopla), only to find out many years later that Freeman never held the record, it was 27 by Ned Williamson hit 15 years earlier. Another shocker is that famous Pete Rose hit to break Ty Cobb’s record wasn’t actually the record-breaker. He actually surpassed it three days earlier at Wrigley Field. Baseball history is fun.

If you’re interested in this card, it’s a high number card and Wills isn’t a common player (more in the semi-star/All-Star price range), so it’s not that cheap. There are current 36 auctions up as of the time of this writing. The most expensive is also expensive for the grade. That’s a PSA 8 for $720. I’d pass on that. There’s also a PSA 7 for $490, but another person has a PSA 7 for just over $340, with a best offer option. A PSA 5 is $230, but an SGC 5 is $185, with a best offer. I tell you those prices, to tell you that completed auctions have two PSA 8 cards cheaper than either PSA 7, and PSA 7’s have sold, both in the $150-$180 range. So the best thing to do is wait for straight auction listings and not Buy it Now offers.

An autographed copy is $180 with a best offer, while regular decent looking ungraded copies are in the $65-$100 range. Once again, if you go for the straight auctions, you will save some money. They aren’t going to be cheap though unless they are very low grade.