Vance Law has been in our Card of the Day series three times already, but he has been overshadowed each time. A little over a year ago, we featured the 1982 Topps Pirates Future Stars card, which includes Law alongside Johnny Ray (and Bob Long). Almost two years ago, Law was featured here with his father on a 1985 Topps Father/Son card, with his father being the great Vern Law. One of the first articles we did for this series back in early April of 2020 was the 1981 Topps Future Stars card, which is the rookie card of Tony Pena. It also includes Pascual Perez. Three Vance Law appearances, three times he’s a secondary player on the card.

Today is Law’s 66th birthday, so we celebrate by featuring him on a card that is just him, his 1982 Donruss card. He was drafted by the Pittsburgh Pirates in 1978, and he played a total of 55 games for the team during the 1980-81 seasons before being traded to the Chicago White Sox on March 21, 1982. When many people were getting these 1982 Donruss cards fresh out of new packs, he was already on another team. Here’s a look at card #582 from that set. 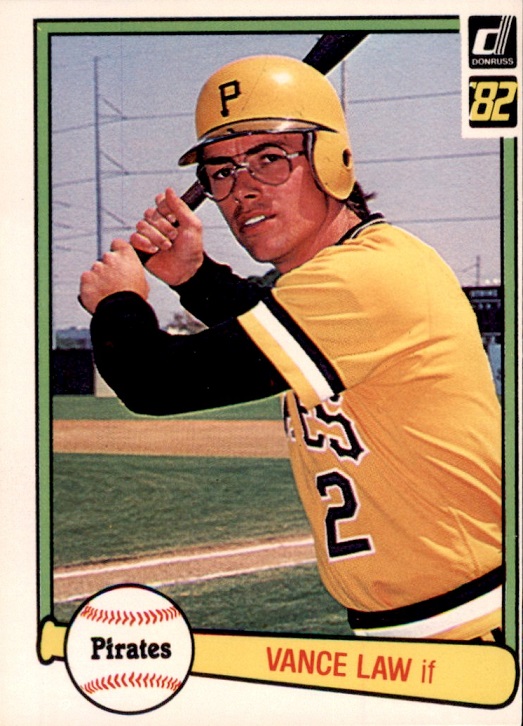 The front of this card has something you don’t often see on baseball cards, or maybe you do and I just never noticed it, or maybe I’m wrong. I’ll have to check more 1982 Donruss cards. Those certainly look like power lines in the background of the photo. The other option is protective netting for something behind the stadium. Either way, it’s a sure sign that this photo was taken during Spring Training.

During the mix-and-match era, I think my favorite uniform combo was the all-black version, followed by black pants, gold top. This all-gold would follow up that pair. It’s a little too much gold for me, definitely not something I would wear, which is why I like it with the black pants better. I do prefer the gold helmets though. Law wore #49 when he started with the Pirates and switched to #2 by the time they took this 1981 picture. His dad wore #20 and #32 with the Pirates, with #20 now being the retired number for Pie Traynor.

Here’s a look at the back of the card: 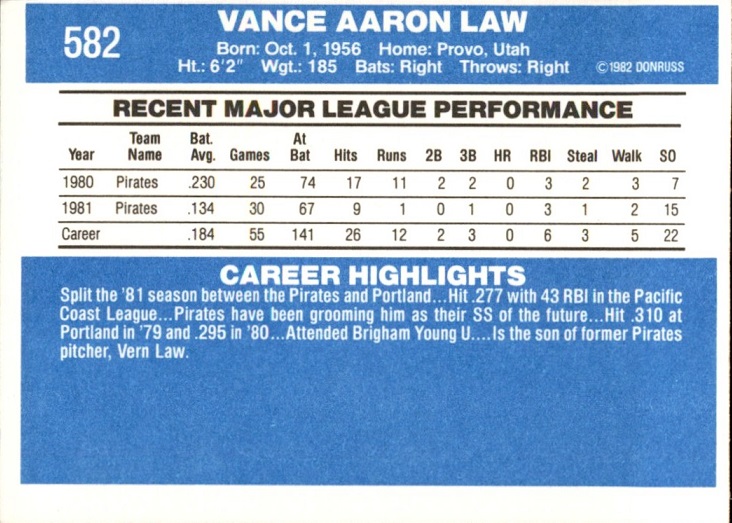 The back of these cards started a long trend with Donruss. Their first year (1981) backs look completely different than what you see here. They were presented vertical like the front of the card, not horizontal like 1982 and beyond. This basically setup that you see here is how Donruss presented the backs until 1992 when they made massive changes to the look.

They left a lot of blue at the bottom of this card, but that has more to do with his pro experience at the time. They would include up to five years of stats, along with the career totals. Players who were around longer had more in the highlights section. As mentioned up top, Law played 55 games for the Pirates, so you’re seeing his full stats with the team. He went on to play 11 years in the majors and made one All-Star team.

If you are interested in this card, there are some options besides the usual $2-$3 delivered for a common card. There are plenty of options under $2 delivered, so don’t fall for the sellers who overcharge on shipping. The most expensive of the 55 current listings is an autographed copy, and Law has an extremely nice autograph. There is one for $18, but you can also get one for $7, which even has a best offer option, so try it out and see what you can do with that price. Don’t hit that make offer button just yet! There is one for under $5, and another slightly cheaper, though that one is in pen instead of marker. Me personally, I like the marker better. Happy collecting!