Today’s Card of the Day comes from the 1949 Bowman set, which I have a new-found appreciation for since starting this series because of the player selection in the set. Today’s article is a perfect example. If you want to collect cards of as many Pittsburgh Pirates players as possible, this is your choice for Elmer Singleton, pitcher for the 1947-48 Pirates. There weren’t many cards being produced right after the war ended, though anything was better than the almost non-existent 1942-47 time period of cards due to paper drives during the war, and factories switching to wartime production. Due to that fact, a lot of the players for the 1940s Pirates don’t appear in sets unless they were bigger name players at the start or end of the decade.

Elmer Singleton wasn’t a big name player, but he saw plenty of work during this time of his career. He pitched 145 big league games over eight seasons, and more than half of them came with the 1947-48 Pirates. He didn’t make it into the 1948 Bowman set, but he made it into the 1949 set, which was good timing for getting him on a Pirates card, as he was released to San Francisco of the Pacific Coast League on March 28, 1949, as partial payment for pitcher Bill Werle, who the Pirates acquired six months earlier. Singleton’s card has something very interesting on the front/back, as you will see here on card #147 from the 1949 Bowman set. 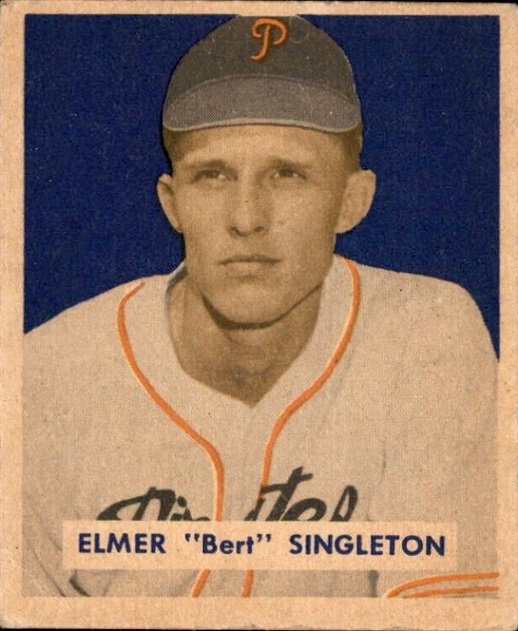 The 1949 Bowman design is a really simple look. White border around the picture, which doesn’t even have a black outline for the entire photo, which you usually see on cards. Name on the front in a box, which is unfortunately placed here, covering the Pirates script on the jersey. They got a colorized black and white photo, with the background removed and replaced with a one-color solid background. This uniform pictured here is the 1947 home uniform for the Pirates, making it easy to date the photo. Unfortunately, the people over at Bowman, who were working with a black and white photo, took some stabs in the dark and came up empty. Those orange lines on the uniform, collar/chest/sleeve were all blue. The “Pirates” across the front was written in blue. The hat was blue, the “P” on the hat was white. They got the white uniform correct, so they get a cookie for getting that right (not a good one, don’t go handing out Oreos or Chips Ahoy for that).

I mentioned something interesting on the front and the back, and I wasn’t talking about the uniform color choices. Let’s look at the back first before I spill the details. 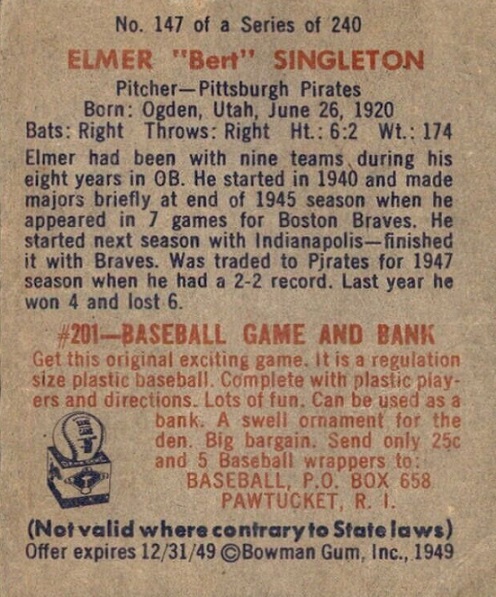 These cards had a lot of player nicknames on them. One of my favorites is the last one we covered from this set back in mid-July. As you can see, Elmer Singleton has the odd nickname “Bert”, which is shown both on the front and back. You could look into it, but I already knew where the nickname came from, so I can save you the trouble. It’s a great story that I had a wonderful time researching. It turns out that both of his parents agreed to the first name “Bert” when he was born, so they named him Bert. Told you it was a great story. If you’re now wondering where Elmer came from, I can help with that too. It is his middle name.

These cards didn’t have room for stats, so they put in a small bio for each player and took up half of the back advertising a swell ornament for the den. The funny thing about that offer now is that 1949 Bowman wrappers are collectible, so you would never send them in if this offer was still valid. Sadly, it expired 73 years ago (sorry to break the news), so you don’t even have the option to make a bad decision.

If you’re interested in this card, there are currently 14 on Ebay, plus a few reprints that offer a cheap alternative with no real value. The listed cards range from a high of $105 for a PSA 6, down to a low of $18 for a low grade (ungraded) example. Technically there is a PSA 5 for $125 that would be the highest, but don’t pay that price. That’s insane. You can get a higher grade one for $20 cheaper, or you can get a PSA 5 from a different seller for $44, with a best offer option. The best deal I see is one that looks like a PSA 5, but isn’t graded and is going for $33…though I’d see what that “best offer” on the PSA 5 would really be.