Today’s Card of the Day is another first-time player in this series, and a member of the 1960 Pittsburgh Pirates team that won the third World Series title in franchise history. Pitcher Paul Giel was born on this date in 1932. He pitched for the Pirates during the early part of the 1959 season and the first half of the 1960 season. He didn’t get to celebrate the World Series, but he did get a nice bonus for being part of that team. When they voted World Series shares that season for all of the players, he received a half share worth $4,208.97, which was a nice chunk of change in 1960.

Today’s Card of the Day is his only card with the Pirates, though that could come with two asterisks, which I will explain below. I also chose something very interesting for this card, adding a bit of a twist. Let’s get right into the card, which is #526 in the 1960 Topps set. 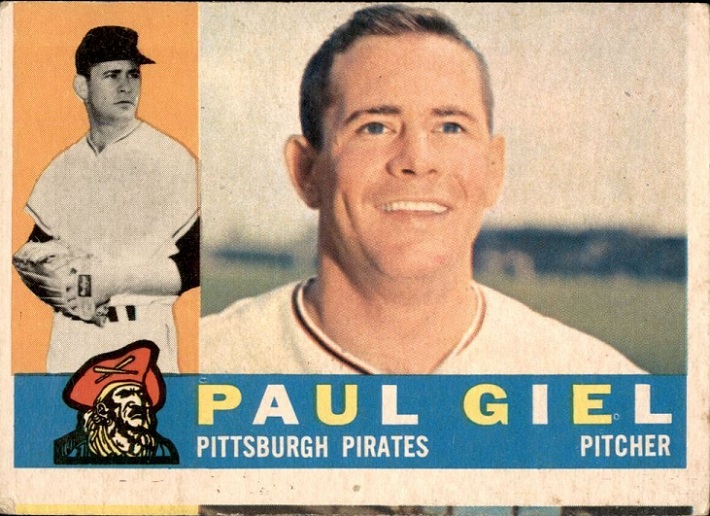 Oh boy, there’s a lot to go through here. First, the reason I chose this particular scan. Look at that miscut on the front. There are some collectors who love the error cards and that word “error” covers a group of oddities, from actual errors on the card (such as a misspelled name) to off-center printing to miscut cards like this one. What you see at the bottom here is a part of another card. With a little searching, I’d probably be able to match it up to another player…so I did, and I’m 78% sure that it is card #538 featuring Frank Barnes of the Chicago White Sox.

The second part to look at is the old Topps trick of getting a picture that works even if a player is traded. No hat here to give it away, not enough of the jersey showing. That is Giel pictured with the San Francisco Giants, though he did play for the New York Giants as well and I don’t know the date of the photo, but it’s most likely San Francisco, since he spent the 1956-57 seasons serving in the military. Not only did they use their old trick, they also did some photoshop with the black and white photo, so now it just looks like he has on the most boring uniform ever.

I mentioned up top that there are two asterisks and the second is that his 1961 card has him as a member of the Minnesota Twins, but he’s in a Pirates uniform. Could I use that card at some point in the future here? Maybe, since there are no other Pirates options.

The 1960 design itself is my third favorite from the 1960s. I’m a huge fan of the 1962 set, so that’s in a tier by itself. The 1960 set shares the second tier with the 1968 set. Then the rest border between average and not so good. What I like here is the horizontal layout with the second photo, as well as the great use of the Pirates logo from then, which is a great logo I might add. They need to bring back something like that. 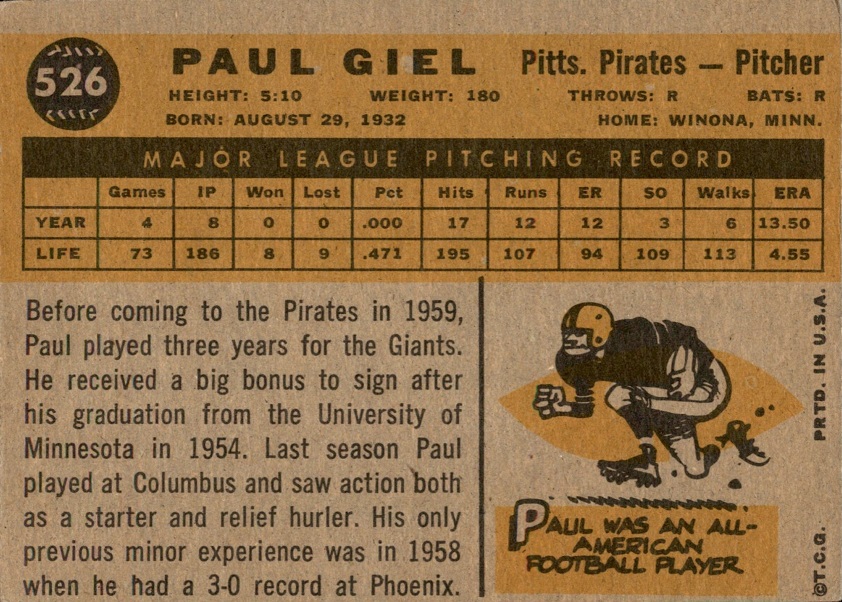 I went with a different back scan, since the miscut cropped some of the information on the card. As noted on this card, Giel received a big bonus to sign, reportedly $50,000, so he was probably in pretty good shape financially before that previously mentioned cut of the 1960 World Series shares. Despite that, I read that he had an off-season job during his time with the Pirates. Off-season jobs weren’t unusual back then, but $50,000 signing bonuses were pretty rare.

If you’re interested in this card, there’s something noteworthy about its place in the 1960 Topps set. It was a fifth series card, and the later series cards are always harder to find and worth more compared to similar cards from the set. Giel is a common card, but you can get decent looking average common cards for a few bucks from this set, as long as it was printed earlier in the print run for the set. The only Giel card on Ebay under $10 is one that has writing on the back, otherwise you’ll want to be in the $15-$20 range here for a decent looking copy. A nice one, especially if it is graded, will run over $100. There are four on Ebay right now over $100, and many in the $20-$30 range ungraded.