Today’s Cards of the Day are a perfect pair of cards for today’s Pittsburgh Pirates History article. This Card of the Day article is going to be more about the story behind the selection, rather than the cards. Neither one pictures a Pirates player, though they are both connected to the team and a former player born on this date. The cards also have blank backs and there are none for sale and no recent sales to look at for prices. Both are about $500 cards depending on the condition, but that’s a middle of the road price.

One of the main players born on September 28th is Louis Bierbauer. Many of you have probably at least heard the name, even if you don’t remember where you heard it or why. He’s the man most often credited with the Pirates being called the Pirates. The abbreviated story is that teams reserved players back then and Bierbauer was left off the reserved list for 1891, after he played in the Player’s League in 1890. Most players returned to their 1889 team, which was either a team in the National League or one in the American Association, after the Player’s League ceased to exist after just one season. Bierbauer’s 1889 team actually no longer existed, but there was a team going by the same name (Philadelphia Athletics) in the American Association in 1891.

Pittsburgh ended up signing Bierbauer, which started a battle between the two remaining leagues, and the signing was called Piratical by people associated with the American Association, which turned into calling them the Pirates in 1891.

That’s the simple story, and one lazy history would lead you to believe. That’s what I learned back when I read the team history as a young lad. As I started to do more research, I learned that the team didn’t call themselves the Pirates, outside media did and occasionally it would show up in Pittsburgh print when they got game reports wired to them. The 1891 team name is murky, especially since team names were not official back then. The 1891 team was called the Alleghenys still, or the Allies, which was just a shortened name for print. They were also called the Pittsburghs(no H sometimes, depending on the paper), which was a common practice back then of just adding an S to the end of the city name. The other names most used were the Hanlons early on, and the Pets caught on later.

The Hanlons name came from team manager and Hall of Famer Ned Hanlon, who wasn’t the manager at the end of the year. The Pets name came from new in-season manager Bill McGunnigle, who used to run practices with a whistle, leading to the local media dubbing the team the Pets, or in some cases, McGunnigle’s Pets. All of those names have just as much merit as Pirates for the 1891 season.

In late 1893, the team was called the Braves, and that lasted into the very early stages of Spring Training in 1895, when the media finally embraced the Pirates name and made the switch. It is definitely lazy history to call the 1894 team the Pirates. They were the Braves that entire year. I’m guilty of it at times, but I try to correct it.

In 1898, Bill Watkins took over as manager and hated the Pirates name so he did something about it. He told the media that they are no longer the Pirates, they are now the Patriots, and they wore brand new red, white and blue uniforms that he ordered. It is wrong to say that the 1898 team was called the Pirates. They were not. From 1899 until now, they have been the Pirates.

If you go by the most accepted names, the timeline is basically:

That brings us to the two cards I selected today. I actually used to own both of these exact cards in the scan for a very short time. They were part of a 13-card auction lot I bought cheap enough that I made my money back and kept two cards for free (not these two cards). I owned them for as long as it took to get them from the auction house and ask a few people I knew if they wanted to buy them.

Here’s the front of the cards: 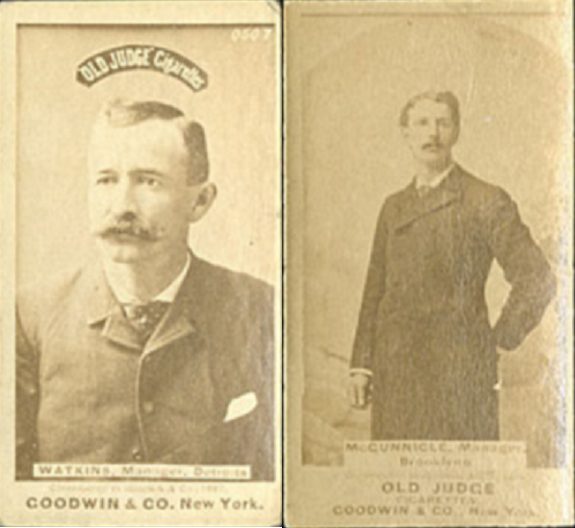 The writing is a little blurry due to enlarging a small scan. Bill Watkins on the left was the manager of the Detroit Wolverines when this card came out, but he soon started managing Kansas City of the American Association in 1888, so the Old Judge company reissued his card with Kansas City listed as the team.

Bill McGunnigle on the right was the manager of the Brooklyn Bridegrooms in 1888 when this card was printed. He led Brooklyn to an American Association title in 1889, then the team moved to the National League for the 1890 season and he won that league title as well.

If you didn’t know it already, managers wore suits back then, as long as they weren’t player-managers. Both of these gentlemen were players earlier in their career, both seeing brief time in the majors before becoming managers.

The McGunnigle card is an interesting one because of the cropping of the background at the top of the card. That’s not something you find on Old Judge cards (obviously you do here), but there was a set called Gypsy Queen cards from the same time that used Old Judge photos  and had a banner up top that filled a space similar to that cutout. That is a set I never collected because they are usually more expensive than Old Judge cards, but they have smaller photos. I’d rather have the bigger photo and pay less.

As I said up top, these cards in those conditions now would run you about $500 each. I don’t remember what I sold them for, it’s been about nine years. The McGunnigle is a little more desirable because it’s harder to find. Watkins is fairly common for a manager because his card was reissued.

28 Sep at 12:02 am
Card of the Day
Bill McGunnigle, Bill Watkins, Featured