Today’s Card of the Day comes from a set that a lot of vintage card collectors ignore, which gives other collectors a chance to pick up Hall of Fame cards at a relatively cheap price. The card is from the 1910 E91 set and it features Pittsburgh Pirates infielder Alan Storke, who was a member of the 1909 team that won the first World Series title in Pirates history.

Storke was a backup for that team, in his fourth year for the Pirates. He wasn’t around during the World Series, getting traded to the St Louis Cardinals for third baseman Bobby Byrne in August. It was later said by Pirates owner Barney Dreyfuss that Storke didn’t want to be traded and loved playing in Pittsburgh, but he knew that Byrne could help the team to a title, so he accepted the trade. It wasn’t uncommon back then for players to refuse trades, or ask for more money from their new team before reporting. Storke did none of that, which stuck with owner Dreyfuss. Unfortunately this tale doesn’t have a happy ending. Just seven months after the trade happened, Storke passed away at the age of 25. He got sick in early March, with what was described as empyema. He underwent a lung operation that some news sources said was a last ditch effort to save him, but he died during the surgery. Storke was attending Harvard Law School at the time, in his third year at the school, so there’s a chance that his baseball career wouldn’t have lasted much longer had he been given the chance to live out his life.

Here’s a look at today’s Card of the Day, featuring Alan Storke. 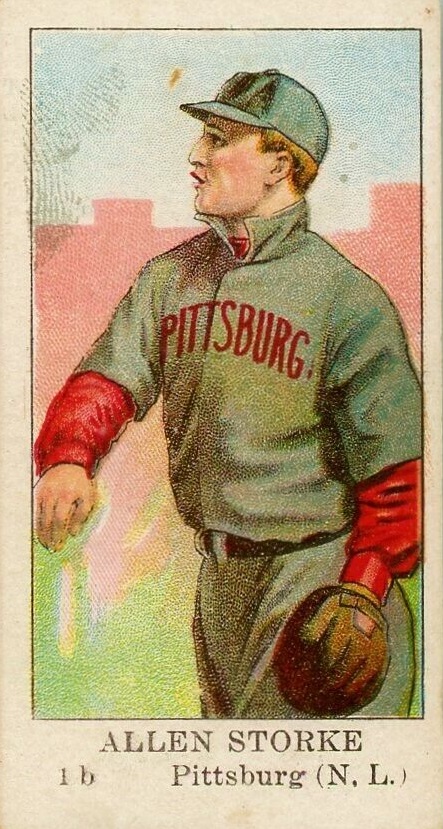 There’s a lot to breakdown here.

The first thing is that Storke is labeled and pictured as being with the Pirates, yet the release date of this set is recognized as 1910. My guess is that the set was produced over 1909-10, which is how he ended up on the Pirates, despite being traded away in mid-August of that 1909 season. I’m guessing some people were getting these cards brand new after he already passed.

There’s the spelling of Pittsburg(h) at the bottom and on the jersey, which was actually correct for the time (1890-1911 spelling).

There’s the spelling of his first name. He was indeed named Alan, but that Allen spelling was a lot more common than it should have been. Besides this card, you could find it spelled that way in print over 100 times during his life, and a few times since, though not recently.

The other thing here is the part most collectors don’t like. A lot of cards in this set have generic artwork, while others just have poor artwork. I can’t find a companion photo for this card’s artwork, so I’m not exactly sure if this was based off of a photo. Either way, it’s not the best card artwork you will find from that era, and that’s not even based off of the fact that they gave the Pirates red for the undershirts and wrote Pittsburgh across a jersey that had no writing on the front. If this was a 1908-09 photo, it would have the iconic interlocking PBC logo on that left sleeve. Storke was there in 1906-07, so that’s not necessarily a mistake. 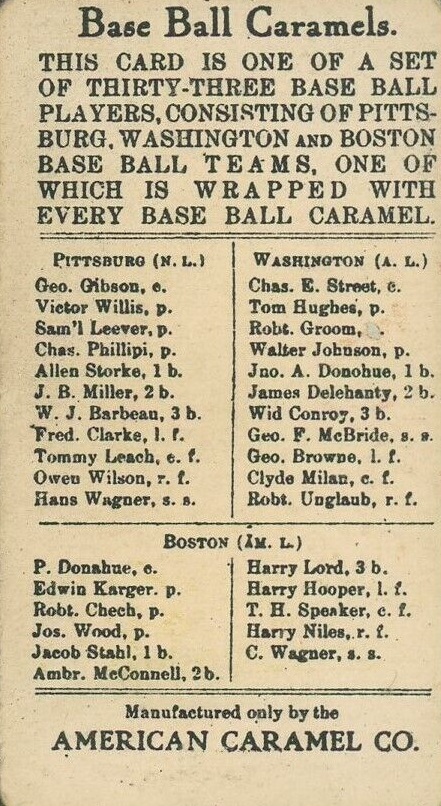 There are different E91 sets. As a group, it’s just called E91, or sometimes E91 American Caramel. However, some choose to break them down into smaller groups based off of the checklist on back. In which case, this is an E91-C (if you couldn’t guess, A and B are the other two, or just E91 and E91-B). Generally, the earlier sets are labeled as 1909. Among the famous names listed on the back here are Hall of Famers Honus Wagner, Vic Willis, Fred Clarke, Harry Hooper, Tris Speaker and Walter Johnson. I can’t forget the “JB Miller”, which is Dots Miller, and the “Jos. Wood” is Smoky Joe Wood. If you don’t know him, look him up. He’d probably be an all-time great if his arm didn’t give out, but he became a star again anyway.

If you want a card of Alan Storke, this is basically your only option for him if you want a card, though he also has an impossible to find postcard with the Pirates. There are two E91 cards on Ebay right now, priced at $155 for one graded at 1.5 by PSA, and then one graded a PSA 5 for $480, with a best offer. Completed auctions actually show three in the last three months (shows four, but two are the same). A really rough looking copy ended for $30 delivered. A PSA 1 was $60, and a PSA 3 was $120 delivered.