This is one of my favorite variations for our Card of the Day article. Bobby Shantz played just one season for the Pittsburgh Pirates, coming over in a trade with the Washington Senators on December 16, 1960, then departing on October 10, 1961 as an expansion draft pick of the Houston Colt .45’s. That time-frame didn’t give Topps any time to get a photo of him with the Pirates for his 1961 card, and he was gone before the 1962 cards were printed.

Whenever Topps doesn’t have a card of a player pictured in the uniform of their current team, they get creative. The 1961 Topps set pulled off some old-school picture magic for Shantz on card #379 in the set. Check the title up top though, there’s a second card listed. That’s because they did the same trick with card #177 in the 1962 Topps set. These two cards are perfect companions for each other, so let’s take a look at both of them at the same time. 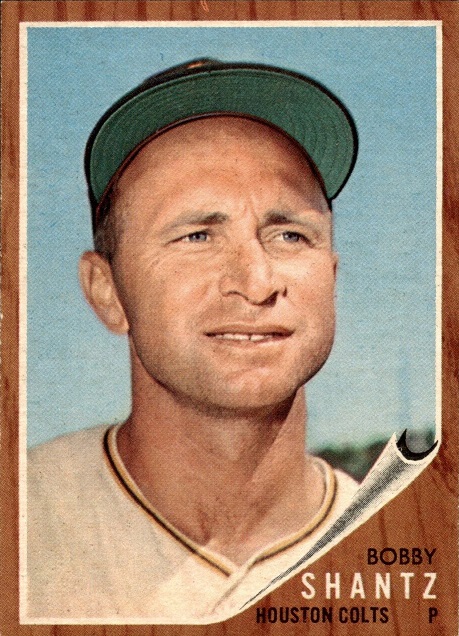 There it is twice in a row with two similar looking poses! Topps took photos of players where you couldn’t see any team logos/identifiers and labeled them as being with their new team. I mentioned up top that the Pirates got him from the Washington Senators, but that was the expansion team that is currently the Texas Rangers, not the old one that is currently the Minnesota Twins. The expansion team Senators debuted in 1961. They got Shantz from the New York Yankees two days prior to the Pirates trade in the expansion draft. So he was only with the Senators for two days, and it was a planned pick, with the Pirates sharing scouting reports with the Senators as part of the deal. Shantz played against the Pirates two months earlier in the 1960 World Series. So what you see on the 1961 card is him pictured in his Yankees uniform.

Topps was able to get a photo of Shantz during Spring Training in 1961 with the Pirates, but he was gone months before their first cards were released for the 1962 set. So that card that refers to the team as the Houston Colts (no .45’s?) shows him in his Pirates uniform. I guess the photographer knew better than to get the Pirates hat “P” in the photo, and it worked out perfect for them. In later years they would do horrible airbrushing to change the jersey collars on poses like these two examples.

I’m only including the 1961 back because we just recently looked at the 1962 Topps set. 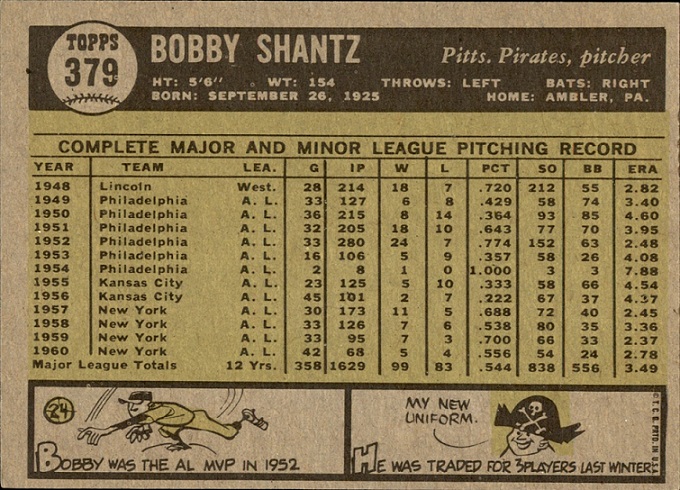 I almost didn’t include the back, but then I remembered that I wanted to talk about a few things that stood out. You can’t tell by the front photos, but Shantz was very small for a pitcher, standing in at 5’6″ and 154 pounds. You can see what looks like his career getting sidetracked by overuse during the 1952 season when he was the best pitcher in the game. They let him throw 280 innings that year, riding him into the ground. He never approached that inning total again, and look at the next four seasons of his career. He just completely fell off in production. He won 24 games in 1952 and 24 over the next five seasons as well.

I had to mention the work done by Generic Gray Topps Man in the comics below. Shantz was small, but a baseball didn’t look like a basketball coming out of his hands. He also didn’t look like the toddler depicted in the second panel there. What is up with that photo? He was 35 years old when the Pirates got him, not 3.5 years old.

If you’re interested in the card that lists him with the Pirates, you can get it for as little as $3, but you probably want to double that amount to look for a nicer condition one. You can also get one for about $20 autographed, with multiple examples. Shantz is turning 97 years old today, so he’s had a long time to sign some of these cards.

If you want the card that shows him with the Pirates instead, it’s basically the same exact story for price EXCEPT there are more high grade examples from 1962, and more autographs, including authenticated copies. You’ll want to pay around $5 delivered, but if you want a nice one, you have more choices here.