Today is another first-time player for the Card of the Day series. Vance Worley pitched for the 2014-15 Pittsburgh Pirates, helping them to the playoffs twice. He did great work for the 2014 team, going 8-4, 2.85 in 110.2 innings over 17 starts and one relief appearance. He had more of a swing-role in 2015, posting a 4.02 ERA in 71.2 innings over eight starts and 15 relief appearances. He came to the team off of a down season in 2013, and he was out of the majors by 2017, though he still pitches in independent ball now.

Worley turns 35 years old today, so it’s a good day for his first appearance in our series. I chose his 2014 Topps Update card, but there really weren’t many choices beyond that, so he’s not going to be a regular in this series, but we will probably get to him again in the distant future. He has a Topps Heritage card and I’m always a sucker for that set. Let’s get into today’s card, numbered US-36 in the 2014 Topps Update set. 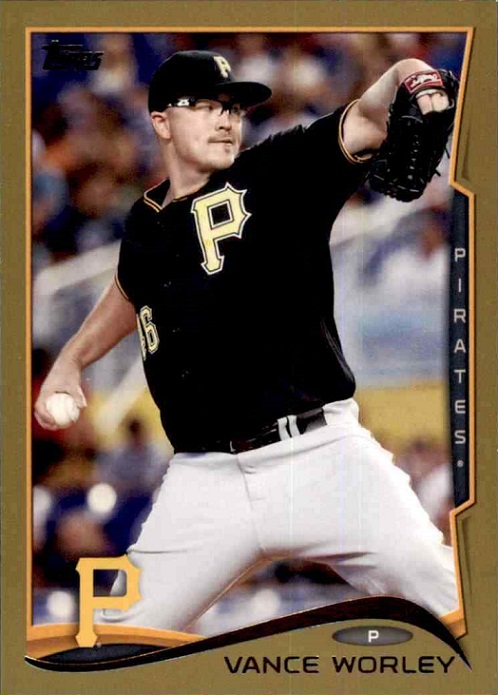 I decided to go with the gold version of this card because it was the first one I saw while scanning Ebay for a card choice. This card has numerous options/variations, which you will see in the pricing section below. Worley didn’t debut with the Pirates until June 15, 2014, so this was a brand new photo of him when these cards came out a little later that same year. The back of the card gives you some clue as to when the cards were produced.

I really like the look of these cards because it gives me the same vibe as the Topps 205 cards, which were based off of the 1911 T205 Gold Border set. I should point out that it’s really the gold version I like, because the regular design with white borders is from that time when all of the Topps set designs just blend into each other for me. Nothing much stands out good or bad. There is a rare black border version that looks really nice, especially when pictured with this Worley card that shows him wearing the black uniform. Even though I hate the current logo compared to almost all of the rest throughout team history, Topps still gets bonus points for including it on the front. It really is a boring logo though, and I wish they would update it. 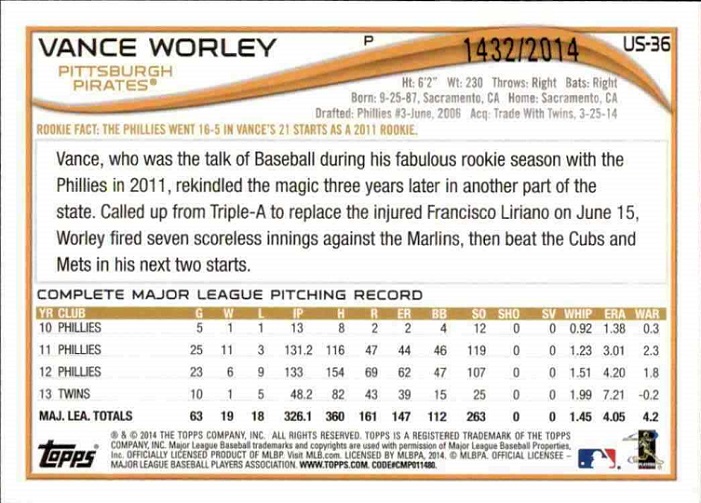 The back is based off of the front design, looking a lot more like the regular version of this card. As you can see in the top right side, they printed 2,014 copies of this card (coincides with the year) and this is card number 1,432 from that run. The bio tells you when Worley was called up by the Pirates and why, then lets you know about his first three starts. As you can see, the final season stats for 2014 aren’t included. He was really coming off of a bad year with the Minnesota Twins before coming to Pittsburgh, and for one season with the Pirates, he was a strong piece of the pitching staff.

As I mentioned, there are all different versions of this card, and the gold just happens to be my favorite. You can get those for $2 delivered, just watch for the sellers who charge too much for shipping. You should never pay more than $2-$3 for a common card off of Ebay. The regular version of this card goes by the same rules. There’s one black border version, a really nice looking card and harder to find with only 63 copies printed. That one is $9 delivered. Topps also partnered with Wal-Mart and Target for cards specific to their stores, so you can get either red (Target) or blue bordered cards for about $4 each. There’s one called a red hot foil card and it is the cheapest of the non-regular/gold copies, going for around $2-$3 from multiple sellers. There’s also one camo card that is hard to find and going for $6.