This is the second appearance for Jeff Karstens in our Card of the Day series. I remembered writing up the first article, though I didn’t remember that it was posted exactly a year ago today. That one was his 2010 Upper Deck card. This is the first appearance for the 2012 Topps Heritage set, which I was certain that I used in this series before. I know I’ve considered using cards from this set, but I do tend to pass on the Heritage set a lot more than you would think, going by the amount of times I’ve used it. Basically, I tricked myself into thinking I’ve covered this set before.

The Heritage line from Topps is my favorite. I love the glossy look of throwback designs. For some odd reason, Topps went with a 49-year time-frame between the old design they used and the year they used it again. The 2001 Heritage set covered the 1952 Topps set, and they were up to the 1963 design by the time 2012 rolled around. Here’s a closer look at card #101 from that set, featuring Pittsburgh Pirates pitcher Jeff Karstens. 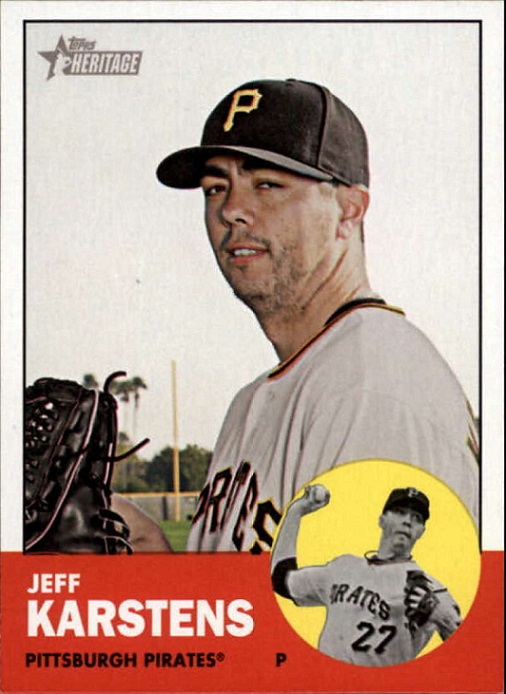 I’m not a huge fan of the 1963 design, but that really doesn’t matter with these Heritage cards. I’m a big fan of every year (they haven’t got to the dogs at the end of the 1970s, so that love/hate hasn’t been put to the real test). Besides the glossy look, the only real difference in design is the Heritage logo, which isn’t a bad look and they kept the size from being distracting. Another small difference is the little R in a circle (registered trademark symbol) after the Pirates name. They didn’t have those back in 1963. Otherwise, these could pass for 1963 cards.

The color choices for the bottom border and mini photo background are options from the 1963 set. They changed colors up among players on the same team, so not every Pirates card had that combo. In fact, very few had that combo in the original set. Joe Gibbon, Smoky Burgess, Don Schwall and Bill Mazeroski all used red border/yellow circles, and I believe that’s it for the Pirates in the set. In the 2012 Heritage set, just Chase d’Arnaud had the same combo as Karstens. 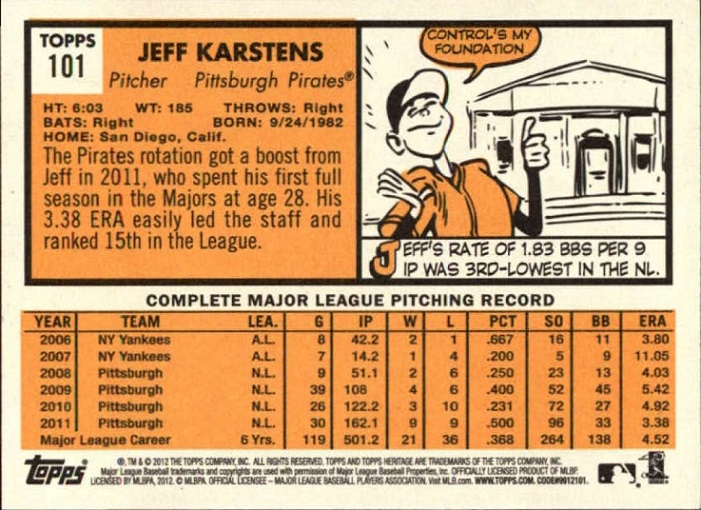 The back of this card is also designed after the 1963 Topps set. It’s just brighter and has all of that legal mumbo jumbo at the bottom. Topps only went with the stats you see listed on the back of their cards in 1963, so the Heritage set stayed with the same set of stats. As you can see from the 2011 stats, it looked like Karstens finally found his groove in the majors. If you lived through it, you probably remember that he was definitely gaining some momentum among the fans before injuries did in his career. Check out the birth date there. Karstens is turning the big 4-0 today!

If you’re interested in this card, you’ll be overjoyed to know that it can be purchased for $2 delivered off of Ebay. The only cards of note are the autographed copies. Karstens had a solid signature. He doesn’t write out all of the letters, but he also doesn’t scribble like a three-year-old with a crayon like so many current players. The cheapest autograph up right now is $9 delivered, but one just ended for $5 with no bids, so you might want to wait for a straight auction instead of a set price auction.