Today’s Card of the Day selection comes from one of the ten former Pittsburgh Pirates born on September 23rd. I decided to knock out a player who hasn’t been in this series before, even though there were some bigger names available for the day. Jim Winn played four seasons for the Pirates, so he probably should have been featured here already. It’s not like there are thousands of players who spent at least four years with the Pirates (the actual number is 426 in case you were wondering). Winn played with the team during the mid-1980s, which gives us about ten choices that picture him with the Pirates. I went with the 1985 Topps set. So here’s a closer look at card #69 from that set. 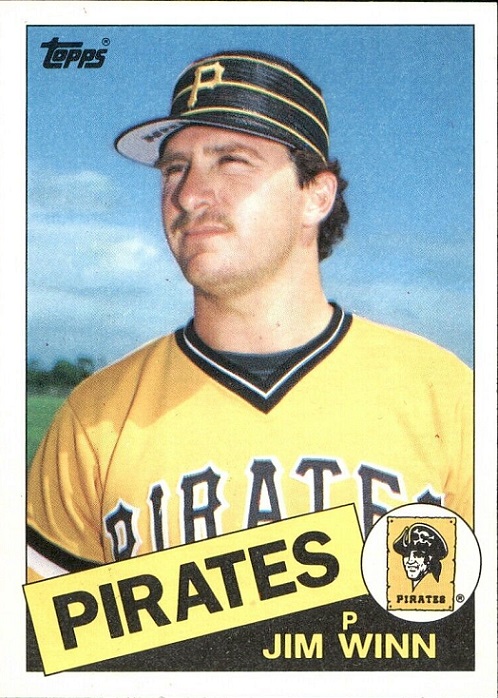 I think the 1985 set is starting to grow on me a little more as I do these articles, though I’ll point out that it’s a set where I like the look of the Pirates cards more than other cards in the set. That happens whenever sets use the team colors in the design. I actually used a scan that dulls the look a little because the generic Ebay scan that a lot of people use is really bright, so those yellows/golds are much brighter. Not only did Topps use the team colors here, they also added that great Pirates logo from that era. Between the team colors being used, the actual uniforms on the cards and the logo added, I might have to re-rank the 1985 set to right behind my two all-timers (1981 and 1987).

Winn really plays the part of that era well in this photo, with the gold jersey and black pillbox cap. There are quite a few players in the Pirates team set who have the same closeup pose, with gold jerseys and the pillbox cap. Bill Madlock, Don Robinson, Rod Scurry, Kent Tekulve, Lee Mazzilli, Lee Lacy, Cecilio Guante, Rick Rhoden, Doug Frobel, John Candelaria, Benny Distefano and Dale Berra from his father/son card. That’s a lot of cards that have a very similar look, and there are a few that didn’t read the memo carefully, with Tony Pena and Brian Harper both wearing the wrong color hats/shirts. 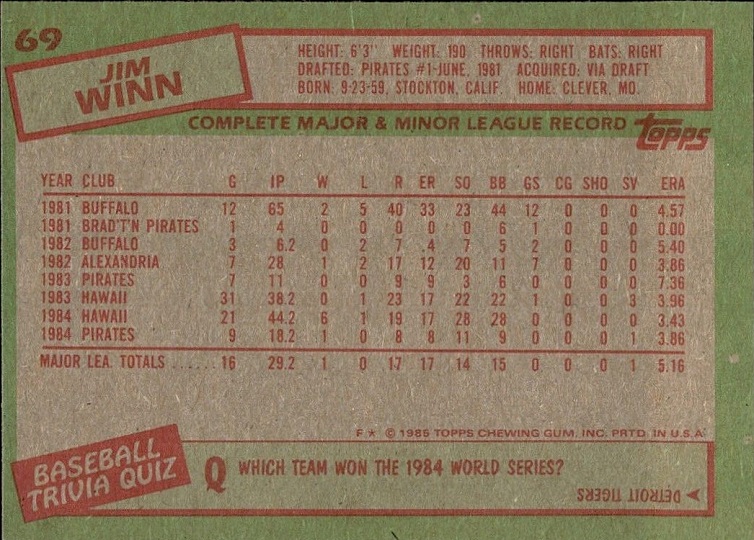 As much as I like the front of 1985 Topps, I dislike the backs…except the Traded cards. These cards are difficult to read in hand, especially if a player has a long career. I think you can tell by this scan that thin/small red writing on a gray back isn’t the best choice. However, they remind me of Christmas, so as long as I’m not trying to read them, I’m fine. The Traded cards have a lighter background color and bolder green/red colors. They are so much easier to read.

That Baseball Trivia question has to be one of the easiest ones for the time a question was asked. If you don’t know who won the World Series a few months earlier, you probably have no clue who Jim Winn is, or why he’s on a piece of cardboard.

If you’re interested in this card, Ebay has plenty of them at low prices. Don’t pay more than $2 delivered. There are some autograph copies fairly cheap, but I will give a warning here. It feels highly unlikely that someone would forge a Jim Winn autograph for $2-$3 extra dollars, risking their reputation as a seller in the process. That being said, there are two autographed cards of his from this set, where the autograph doesn’t match up to any others I saw on Ebay. So if you’re interested in buying his autograph, compare it to the others listed on Ebay. He has signed a lot over the years, so go for the safe picks.