If you check out the Baseball-Reference page for Foy Frazier, outfielder for the 1930 Pittsburgh Pirates, there is a line missing in his stats from that 1930 season. It’s not his time with the Pirates. It’s his time with the Newark Bears, where Frazier’s stats are credited to an unknown player named Roy Frazier. That’s not a big surprise as he was often called Roy by mistake. Foy Frazier was a member of the Pirates for a good portion of the 1930 season, but he never got into a regular season game, so his name can’t be found in the Pirates record books. Here’s the story of his eight months of being a member of the Pittsburgh Pirates.

Frazier debuted in pro ball at 17 years old in 1926, playing for Oakland of the Double-A Pacific Coast League, which was the highest level of the minors at the time. His time there was very limited that year according to his online stats, with six games played and one hit (a triple) in two at-bats. He suffered an injured thumb early in the year and then missed time due to illness in the summer. In August, he was tried out as a pitcher, which is actually where he saw all of his playing time that season.

Frazier hit .333 in five games for Oakland in 1927, while spending the majority of the season with Ogden of the Class-C Utah-Idaho League. He batted .359 in 45 games with Ogden, collecting 16 extra-base hits. He suffered another hand injury that season that caused him to miss some time. At the same time, Oakland decided to give up on him as a pitcher. It was said that he was going to make a fine first baseman some day, but he was known more as an outfielder throughout his career.  It was with Oakland where he first caught the eye of Pirates scout Joe Devine, who would play an important role in this story later.

Frazier split the 1928 season evenly between Ogden and Oakland, with much better results at the lower level. He had a  .379 average, with 23 doubles, nine triples and four homers in 62 games with Ogden. He batted .257 in 63 games for Oakland, with 12 doubles and two triples.

Frazier was with Oakland for the entire 1929 season. He batted .263 in 156 games, with 20 doubles, one triple and one homer. Despite playing 156 games that year, he wasn’t a regular at the end of the season. The schedules then were much bigger in the Pacific Coast League than the Major Leagues, with the league leader in the PCL getting into 203 games that season.

On March 3, 1930, an unhappy Frazier purchased his own released from Oakland, which came as a surprise to many fans. Just a few hours later, it was said that he sold his contract to the Pittsburgh Pirates, under the recommendation of scout Joe Devine. Players occasionally purchased their own release back then, so that wasn’t odd, and usually it was because they were signing somewhere else. It was said that Frazier lost no money on the deal. Devine was a really big supporter of Frazier, and had quite a compliment for him that the Pittsburgh fans would soon see in print.

The Pittsburgh Pirates were doing their Spring Training in Paso Robles, California in 1930, so Frazier was able to join the team immediately. He made quite an initial impression with his defense, running down a long drive with his back to the plate the entire time. The next day he was making more outstanding catches, while also doing an excellent job at the plate, hitting the ball hard every time he came to bat that day. That’s when Pirates fans got their first word of how highly scout Joe Devine thought of their new player.

Devine compared Frazier to Lloyd Waner when he (Waner) first started playing ball. Yup, he put his new guy in the same class as a Future Hall of Famer at the peak of his game, when he was known for his outstanding defense. Waner is credited (or discredited) with a -2.1 dWAR for his career, but those who saw him play at that same time would vehemently disagree with him being described as slightly below average, especially at that early stage of his career. Devine followed up that assessment by saying that Frazier was 1-2 years away from becoming a valuable player in the majors.

After being talked up, Frazier didn’t get many mentions from the local media for the rest of Spring Training. His batting stance was talked about one day, stating that he stood with the bat on his shoulder until the pitch was released. They also called him the fleet-footed youngster another day. Other than that, it was just his name in boxscores.

On March 31st, Frazier went 1-for-3 with two walks and two stolen bases. He got into a game on April 2nd in which he played the second half in center field and collected two hits, two runs and stole a base. On April 4th, he batted lead-off and went 0-for-3 with a run scored and stolen base. He was seeing regular playing time just two weeks before the regular season started on April 15th in Cincinnati. Frazier caught a break that season when Lloyd Waner wasn’t ready to start the season, allowing the “future Lloyd Waner” to remain with the team on Opening Day.

The Pirates played a four-game series with Cincinnati to begin the season, and Frazier was on the bench for the series. When the team went to St Louis for a three-game series (they only ended up playing two), Frazier and pitchers Bernie Walter and Marty Lang, along with scout Chick Fraser, went to Pittsburgh instead. That was done by teams often back then to save on travel costs, figuring the players left could handle a short series. Lang eventually pitched two games for the 1930 Pirates, and Walter pitched one game that year, which ended up being their entire big league careers.

Frazier’s next mention was just a list of the players with the team on May 2nd. Three days later, he was in the headlines for the wrong reason. The Pirates released him on option to Newark of the Double-A International League on May 5th. That was three weeks after Opening Day and Frazier had not played in a game.

Frazier went to Newark for 17 games and put up a .300 average and a .400 slugging percentage. He was then assigned to Indianapolis of the Double-A American Association in June, where he hit .345 with three homers in 33 games. On July 26th, he returned to the Pirates after Indianapolis had to make a roster move due to too many players. The Pirates announced at the time that Frazier would remain with the club through the end of the season. That’s not surprising, since he was hitting well for 50 games at the highest level of the minors.

As mentioned, Foy Frazier never played a regular season game for the Pirates. His mentions the rest of the way were sporadic, as you would expect from someone sitting on a bench. It was noted on August 1st that he and Bernie Walter didn’t make a trip with the team to Chicago. At the end of the month, it was noted that he was going to be in a race around the bases with Reds speedy outfielder Evar Swanson. Then on September 7th, it was announced that the Pirates let him return to his home in Oakland for the rest of the season. They didn’t release him though, at least not then.

On November 4th, it was announced that Frazier was sold to the San Francisco Seals of the Pacific Coast League, officially ending his time with the Pirates. His official time with the Pirates was eight months and one day. His time on the active roster during the 1930 season was 63 days. Yet he did not get into a regular season game. In modern days that would have still made him eligible for an MLB pension (you need 43 days), yet he doesn’t even get his name in the record books.

Frazier had a big season for San Francisco in 1931, hitting .327 in 154 games, with 34 doubles, 13 triples and seven homers. He ended up getting released mid-1932 when Mission of the PCL got seven new players at one shot. By 1933, he was playing semi-pro ball in California, which he did regularly through 1941. He later became a police officer and ran a cafe in Fresno, living until age 80, before passing in March of 1989.

Here’s his one known photo with the Pirates and it is rather fitting considering that his name isn’t in the record books. 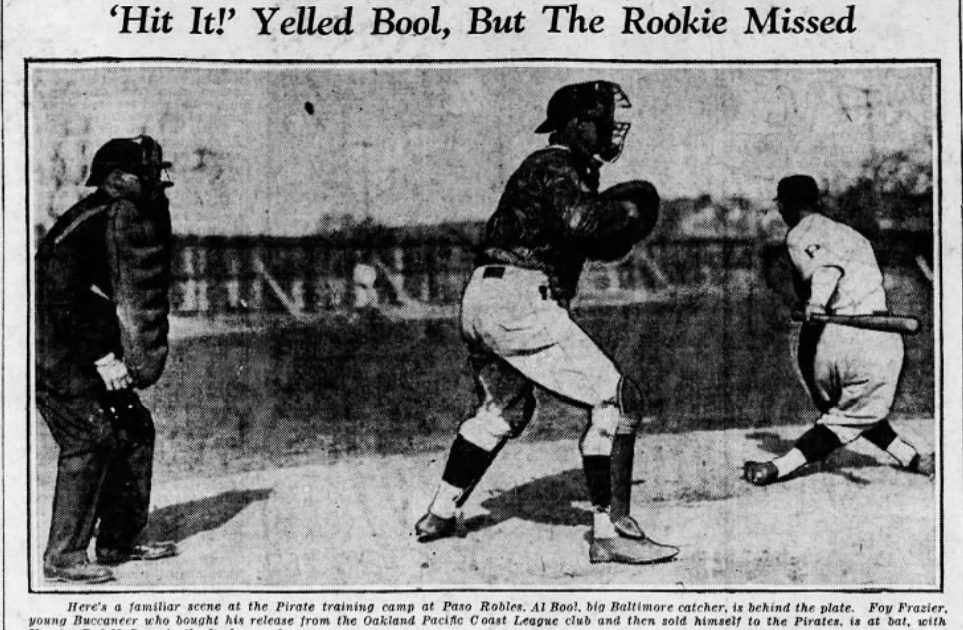