Today’s Pittsburgh Pirates History article is full of firepower for players born on this date. You have guys who had strong careers in Sam McDowell and Tom Brown, with their best performances coming outside of Pittsburgh. You also have pitcher Max Butcher, who had a nice career with his best work coming with the Pirates. I’ve already featured Brown and Butcher, as well as a recent article for Jason Christiansen, who is also celebrating a birthday today. McDowell didn’t have any Pirates cards unfortunately. There were a total of ten players born on this date, but not much to go on for a Card of the Day article featuring them with the Pirates.

Ben Shelton is one of those other players, and his big league career lasted just 15 games. However, he was around at the right time to get featured on a big league baseball card. That led to his appearance in a few sets, including today’s Card of the Day subject, card #568 from the 1992 Bowman set featuring Ben Shelton. 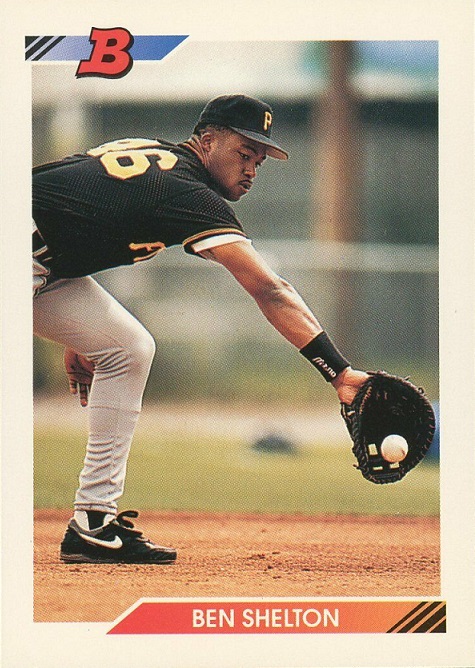 Shelton was still almost a year away from appearing in the majors when these cards came out. They were produced late in the year and it’s a very popular set that has held that popularity for a long time. Despite being produced near the peak of baseball card popularity and mass production of cards, these cards were only printed in numbers based on preorders from dealers. They were higher quality cards than previous releases from Bowman during the 1989-91 years. The set also has some strong rookie cards, giving you a trifecta of reasons that it has held that popularity. Shelton was one of many players with no big league experience, who Bowman hoped to hit on before they became famous. 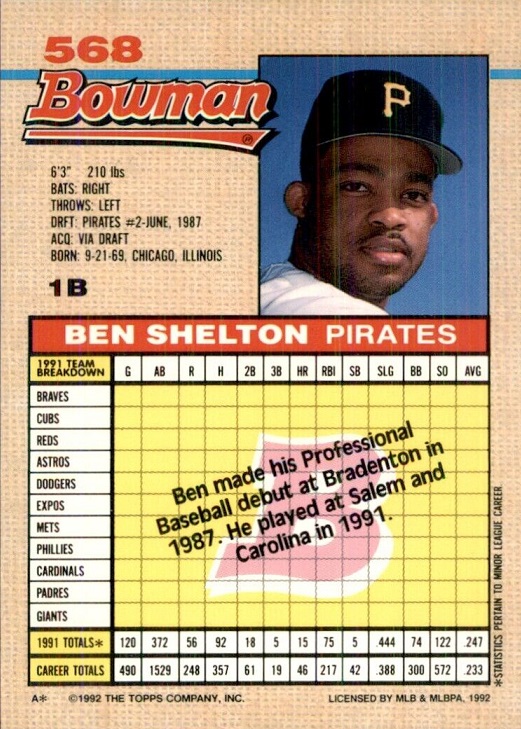 I could not find a decent scan that also didn’t have printer lines on the card, making me think a lot of people use a generic Ebay-provided scan of the card. It distracts a little from the second photo of Shelton, but that’s only a small part of the back here. It’s interesting that Bowman decided to use the same setup for hitters regardless of whether or not they had big league experience. These back have a ton more information for the big league players. These cards were also produced back when the National League only had 12 teams (American League had 14 at the time).

The small amount of back info they give you for Shelton includes three team names, though they don’t tell you what levels those teams represent. The Bradenton team listed there is actually the Gulf Coast League Pirates. Salem was High-A, and Carolina was the Double-A team at the time. Shelton spent all of 1992 with Carolina and put up mediocre stats, but he caught a break in 1993 when the Pirates were short-handed two outfielders and he got his shot at the majors. It was about a five-week cup of coffee, which is five more weeks than I spent in the majors. Not great for a second round pick, but plenty of them don’t even get that shot.

These cards are somewhat plentiful on Ebay despite the set not being over-produced. There is one autographed copy for $14, and I’m guessing his autograph isn’t that plentiful. As a personal side note, I once collected signed index cards of pre-1940 players and the more obscure the better, so he would be one of those players (especially since he was with the Pirates), who I would have a lot of interest in many years after his career. Someone will read this article in 2066 and say that they have been looking for a Shelton autograph for years. Anyway, if you just want the card, you have multiple sellers to choose from in the $2 range.