On September 20, 1969, 22-year-old Pittsburgh Pirates pitcher Bob Moose threw a no-hitter against the New York Mets. Just 26 days later, the Mets won the World Series. He wasn’t dominating a weak team at the time. Moose no-hit the World Series champs at Shea Stadium, at a time that they were still trying to clinch their playoff spot, holding on to a four-game lead with ten games left in the season.

To celebrate that masterpiece, Moose is making his third appearance in our Card of the Day series. We looked at his 1969 Topps card first in honor of the no-hitter, and his rookie card was also featured here (with Bob Robertson) from the 1968 Topps set. That was posted last October 9th, which was not only Moose’s birthday, it was also the date of his untimely passing in 1976 at 29 years old. Today we take a look at a set that hasn’t been featured here yet, and only baseball card collectors would classify it as a card.

In 1971, Topps inserted one coin in each five-card packs of their baseball cards. They were much smaller than regular cards, measuring 1 1/2 inches side-to-side and top-to-bottom. In the baseball card collecting world, the term “card” is loosely translated to something picturing a baseball player. Most of those “somethings” are regular cards, but it’s easier to group everything together, rather than separating a few things like pins, coins, discs, small felt pennants, etc into their own groups, when they make up such a small percentage of the population. These were called coins, but you can find prices/checklists in old card price guides. So here’s a look at “card” #147 from the 1971 Topps Coins set, featuring Bob Moose.

Here’s the front of the coin: 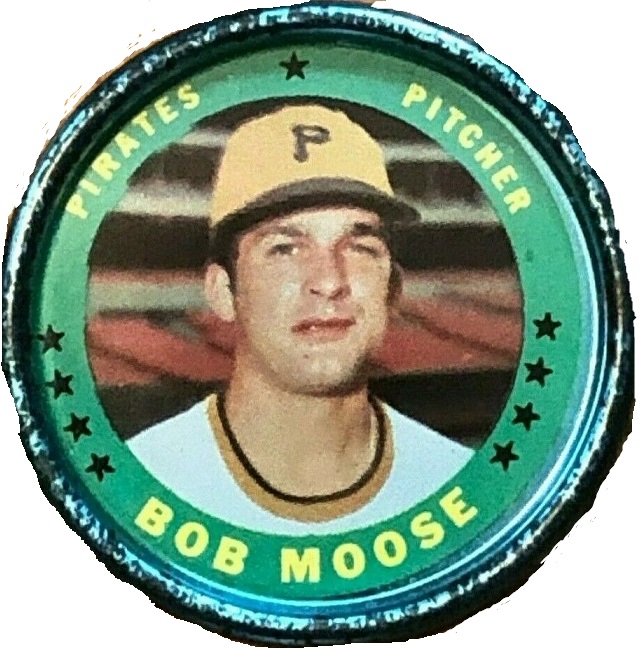 I cropped out the odd background on this scan so it didn’t distract from the coin, though that crop job might be more of a distraction (the back scan isn’t any better). Anyway, the coins are round, don’t let the scan fool you. This is obviously enlarged to show detail, but these coins seem to have poor image quality, or they don’t show up in enlarged scans well because this was the best of the choices I could use. All of the Pirates players had green borders around the photo and yellow letters, with black stars. The front info was basic, with the team name, position and player name. One great thing about these compared to cards is that you could handle them without worrying about the condition. Obviously they would wear if they were mishandled over time, but card corners were much more fragile than the metal coins.

Here’s the back of the coin: 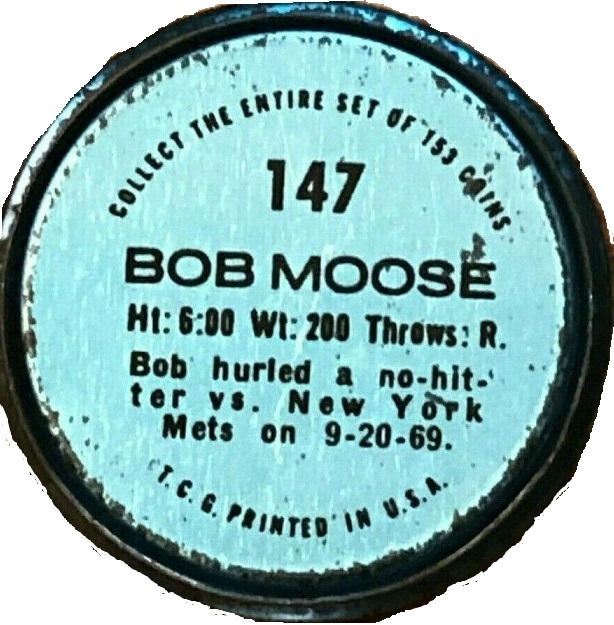 As you can see from the back, there were 153 of these coins in the set. If you’ve never seen one of these in person, just look at how small that writing is above the number and picture trying to read that in hand. The didn’t have room to write much, but they made sure to mention his no-hitter against the Mets, which is what sold me on featuring this coin today.

If you’re interested in buying one of these, you’ll be happy to know that they are fairly cheap. This set is also a nice alternative to getting cards for Roberto Clemente, Willie Stargell and Bill Mazeroski, as well as other Pirates players..actually the others are just Matty Alou, Dock Ellis and Moose. As for today’s subject, you can get his for as cheap as $7 delivered, and the prices go as high as $20 for the others. There are six on Ebay right now, and none have sold in the last three months.