Today is a light day for former Pittsburgh Pirates. Just four have been born on September 19th, and two of them have already appeared in our Card of the Day series. A third one (Ray Sadler) didn’t have any big league cards while with the Pirates, but I might sneak him into a future article on one of his minor league cards printed when he was in the minors for the Pirates. That leaves us with John Jaso, outfielder/first baseman for the 2016-17 Pirates.

Jaso is making his first appearance here and we are using his 2017 Topps card. This is the first time we have featured this set, though we have looked at various other Topps products from 2017, including an offering from the Update set, which has the same look. This still counts as the first time though, so let’s get right into card #615 from the 2017 Topps set. 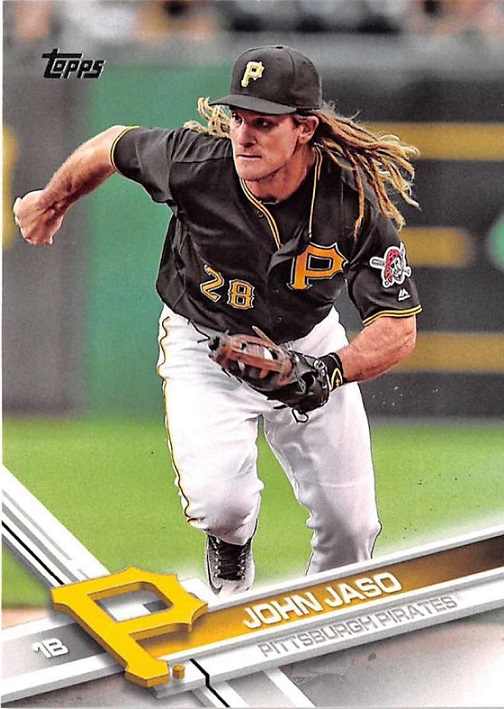 Topps went with the borderless photo look here. I’m usually a fan of that style, unless the rest of the card is really lacking in design. I’m not a fan of the current Pirates logo, I’ve made that clear before. In a word, it’s boring. However, I’d rather see it on the front than not at all. I was trying to figure out why they put a dot after the P, but they actually gave that 3D look to that little copyright/trademark/whatever symbol too. They used team colors as part of the front design and I like the silver/gray combo for the team name. Along with the high quality action photo, this is a nice offering from Topps. 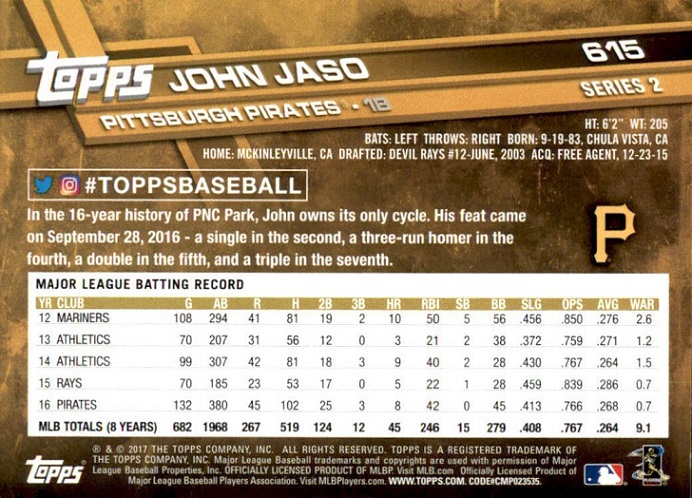 I like how the back keeps the same theme of the front (the box with his name), but expands on that into the entire back design. If I had to grade the front, it would probably be a solid 6 out of 10 for the design, but the back design would grade much better. The two knocks I have against it are the lack of a second photo, which is not necessary but seems standard by now, and the fact that they only used his last five seasons for stats. That’s a weak Donruss mid-80s move, or early Upper Deck. You’re better than that, Topps. The design is nice though, and the logo on the back as well is a nice touch. You also get a little history fact and some social media stuff from Topps. Years from now someone will look at that and have no idea what those symbols are next to #TOPPSBASEBALL.

If you are interested in this card, there are plenty on Ebay. The regular version of this card obeys all rules and regulations pertaining to the sales of common cards on Ebay (that means don’t pay more than $2 delivered). The most expensive version of this card on Ebay right now is a Chrome Sapphire Gold Refractor, which was limited to five copies. The seller wants $35 delivered. There’s another “limited to five copies” card, which is a 5×7 red version, and that’s $21, with a best offer option. There’s a second one of those for $13, or a best offer. Then there are plenty of other options under $10, including the Gold version numbered to 2,017 copies, a Factory Set Foil edition numbered to 175 copies, and cards with “Limited Edition” and “2017 All-Star Game” printed on them. There’s also a mini version, an On Demand, a Sapphire, a Rainbow Foil, a Sapphire Blue Refractor…basically, if you have $100 burning a hole, you can spend it buying all of the available versions of this card on Ebay right now.