Today’s Card of the Day player is a first-time subject in this series that has been running almost daily since March of 2020. We still have plenty of players who haven’t been in an article yet (I should put a list together), but pitcher Roger Mason won’t be in that dwindling group anymore.

Mason pitched a total of 89 games for the 1991-92 Pittsburgh Pirates, helping them to two straight National League East titles. He has a decent amount of card choices to use here, but I went with the 1992 Leaf set. It hasn’t been too long since we look at this set, doing back two months ago for Doug Drabek on his birthday. However, that was the first time we used the 1992 Leaf set, so it’s okay to go back to it in a short time for Mason’s 65th birthday. I was going for the look of the card anyway and I’m a fan of this set design, both front and back of the cards. So here’s card #454 from series 2 of the 1992 Leaf set. 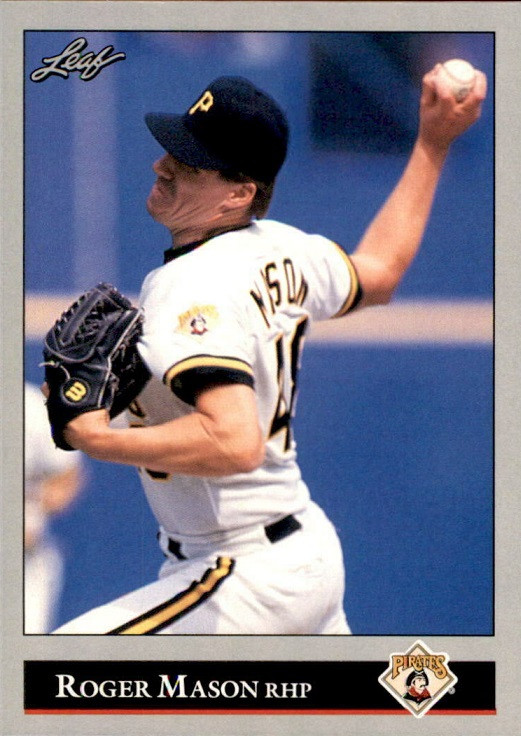 I like the action shot here, though it’s not a great shot of Mason himself. You wouldn’t be able to recognize him based off of this card unless he was wearing his uniform. I like how you get a great shot of his pitch grip there. I love the gray border design used here. I’m a fan of the 1970 Topps design, and while this looks a lot different from that set, the light gray borders seem to always work.  You got the great Pirates logo in the bottom corner and you can make it out on his sleeve as well. These were designed to be high quality cards to compete with Upper Deck blowing everyone else out of the water in 1989, and they work well. 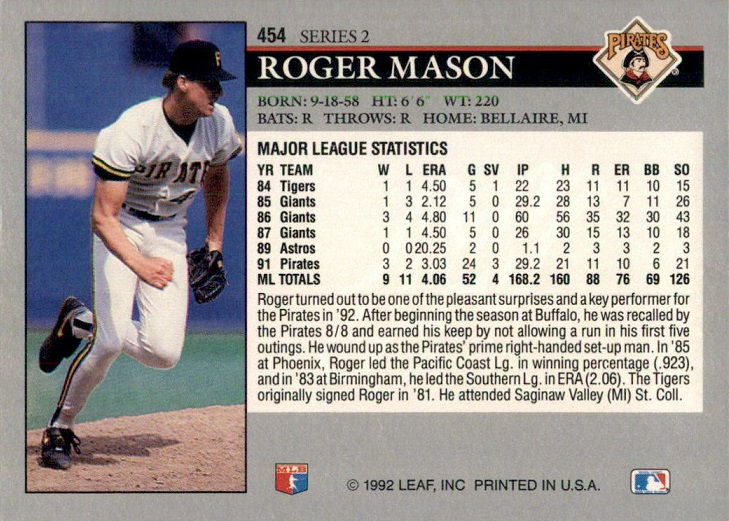 I’m a fan of the back of these cards as well. You get a second photo of the player and once again it’s really not a great look at Mason because of the shadow from the hat, but it’s a nice game action shot. He appears to be running over to cover first base. They went a little light on the statistical categories, but that’s a fair sacrifice for the added photo.

I’m a big fan of sets that use the black and white combo for the stats/background/bio, as it makes them easier to read. This set skipped his minor league stats, but they talked about his minor league highlights, so it works. They also included a second Pirates logo because they know how much I like them.

One thing that really stands out here after studying so many recent backs for these articles is the bottom section. Look how simple that looks with the two logos for MLB and MLBPA, and the copyright for the set, which they let you know was printed in the USA. Look at any modern card and it feels like reading the list of side effects for new drugs on commercials. Just so much nonsense. This clean look almost feels odd because I’m used to seeing so much legal mumbo jumbo.

Are you interested in this card? Then you’ll be happy to know that there are plenty of options under $2 delivered. There’s also a limited gold version of this card (and every other card), which can be had for just over $2 from two sellers, more from others. There’s a signed copy for $5 that might interest you as well.