You should all know by now that I am a huge fan of the Topps Heritage line. You might also know that I really like the look of the 1971 Topps set. So when Topps came out with the 2020 Heritage set that used the 1971 Topps design, I immediately started checking out the Pittsburgh Pirates cards in the set.

The one I really went after first was the Rookies card that featured James Marvel and Dario Agrazal. Yes, I know how they have turned out, and not surprisingly either, as neither one was a top tier prospect coming up through the system. They are two pitchers with similar stories. From covering their career closely as part of my work on Pirates Prospects, I saw both of them add velocity and improve their prospect status, then suffer injuries that took away those velocity gains. For Agrazal, it was three different significant injuries in a short time. For Marvel, he suffered a forearm strain that he never really recovered from as far as previous results.

Despite the results from these players, I am still a big fan of this card. Part of that comes from just liking the Topps Rookies cards throughout the years. If the players did great, that makes them even better, but it’s not necessary for me to like the card. It’s the look of the Rookies cards that always hooks me. So finding one that uses a throwback design to a great set literally means that there were no bad choices. So here’s a look at card #27 from the 2020 Topps Heritage set, featuring James Marvel and Dario Agrazal. 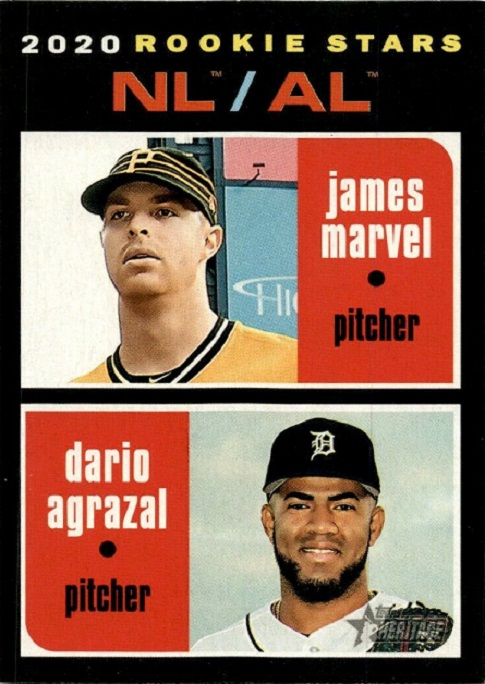 Oh! You didn’t know there was a twist here, did you? Agrazal was already a member of the Detroit Tigers organization by the time that these cards were released. There’s the great throwback design to the 1971 set, with the black borders and an inner white border around the photo, with red for the name/position boxes and everything in lower case letters. Except for the Heritage logo in the bottom right (and the “2020” on top obviously), this could pass for a 1971 card at first glance. What makes this card even better is that they got Marvel in a throwback look. Too bad it wasn’t the look from 1971, but I’m not complaining. 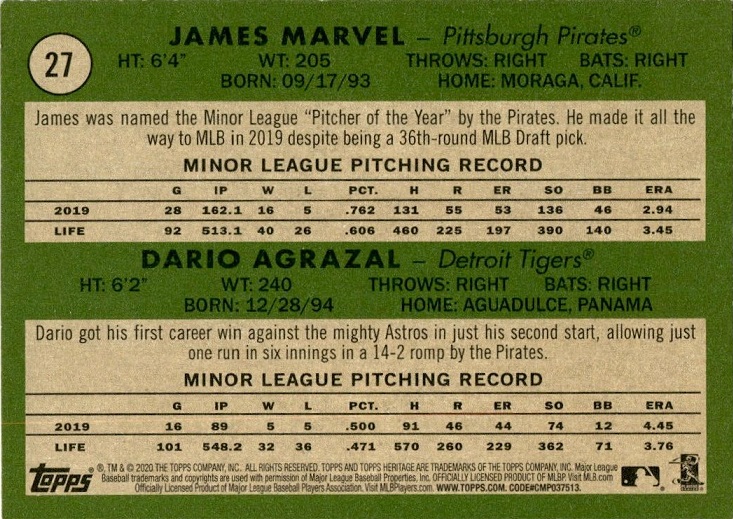 The back uses the same look as the 1971 Topps set as well. Both pitchers had Major League stats already before these cards were released, but Topps decided to go with just minor league stats. Just like back in 1971, they included one year of stats and the career totals. Each player also had a small bio above the stats, keeping with the original theme. Knowing that they only used minor league stats, it’s interesting that both players had mentions of their MLB time in those small bios.

If you’re interested in acquiring this card, you’ll be happy to know that it can be purchased cheap, with many seller options. There’s a very interesting option that is the highest priced auction. Someone is selling 26 of these cards for just under $7 delivered, which includes the tax. There are a ton of solo options under $2 delivered. There’s a PSA 8 for $23 if you’re feeling adventurous, though I’ll note that almost every $2 copy would likely grade an 8 or better. I really thought about buying the lot of 26. Not sure what I’d do with them, but that’s a pretty good price!