I have changed my Card of the Day choices many times in the past because I couldn’t find a quality scan of the card. I’ve even gone back to a few of those skipped choices at a later date when a better scan was available. Today’s Card of the Day has a poor quality/cropped scan and I’m apologizing in advance for it, but once I saw this card I had to use it.

Today’s Pittsburgh Pirates History article was loaded with eight former Pirates born on this date, plus a recap of the MLB debut of Willie Stargell. Normally I would just use the Hall of Fame player for the Card of the Day choice when their name is the headline of the day, but Stargell just recently appeared in this series, so it was too soon to go back to him. I instead focused in on pitcher John Ericks, knowing that he would have plenty of card choices, since he played during the 1995-97 seasons and each company was putting out multiple sets. That’s how we got to this 1997 Fleer card, and I’ll explain why I refused to wait to use it, though you will probably realize why as soon as you see it. 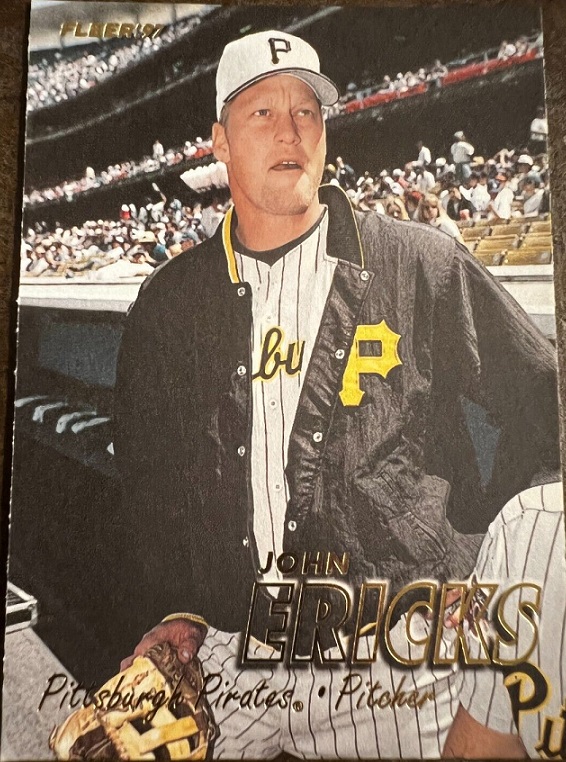 I was not a huge fan of those light gray pinstripe jerseys from this era, and I think they would have looked better with the standard black cap/gold “P” logo. However, I was young back then and I got one of those caps (looks white in this photo, but you can see it better in other photos that were taken the same day at Dodger Stadium). The odd thing is that I liked it so much that I didn’t wear it and I still have it hanging on a custom Pirates hat rack my dad made for me about 7-8 years ago. What really sold this card choice for me is the jacket that looks a lot like the one they wore in the 70s that you can find on some old Topps cards. That is definitely a throwback style.

Fleer’s design this year was rather simple. Gold letters that tell you who/what/where for the player, along with a borderless photo and a tiny set logo in the top left corner. There are Tiffany versions of this card that are harder to find and everything is in light blue lettering instead. 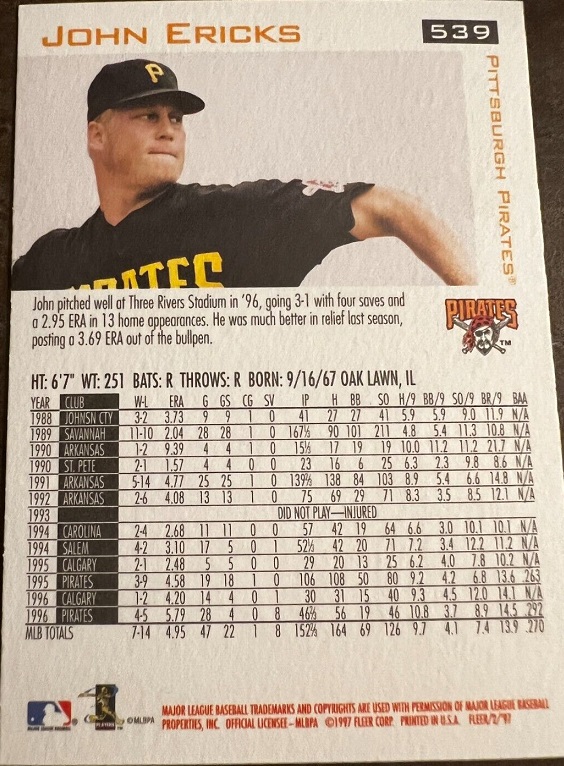 The back has the better looking jersey/hat combo from the era in a second photo of Ericks. They also included the Pirates logo on the back, as well as his entire career stats, including  rate stats, such as strikeouts and walks per nine innings. The 1997 season ended up being the final year of his pro career, and his big league time was limited to 9.1 innings. So you have almost all of his career stats here.

If you’re interested in this card, there are a few options available on Ebay and you basically just have to watch for high shipping charges. None of these cards have sold in the last three months, which tells you about people collecting this set now. The 1997 Fleer Ultra set has four sold copies over that time. There are two Tiffany copies available right now and they are both around $10 delivered. The regular card can be had for as low as $2 delivered.