It’s too bad that Fritz Ostermueller only has two cards with the Pittsburgh Pirates. I already looked at his 1949 Bowman card, so maybe I’ll check for some memorabilia I could cover at some point down the line. The man deserves some good recognition.

The movie 42 did him a great injustice when they staged a game in which he beaned Jackie Robinson in the head and then told him that he doesn’t belong in the majors while the two teams fought on the field. One small detail, none of that ever happened. There was no beaning, there was no brawl, there was no words exchanged. Nothing. The people who wrote the movie picked a random player who couldn’t defend his name, used his real name and then smeared his name, all to make things worse for the guy who had it the worst without any added fantasy situations. It was unnecessary, uncalled for, and it was a surprise to Ostermueller’s family, who had to deal with defending something that never happened.

So while I’m sure most baseball fans here enjoyed that movie (I’ve never heard a bad review), just know that Ostermueller wasn’t that guy. He deserves better, so on the anniversary of his birth 115 years ago today, let’s pay tribute to the pitcher who spent 15 years in the majors by taking a look at this rare card from the 1947 Tip Top Bread set. 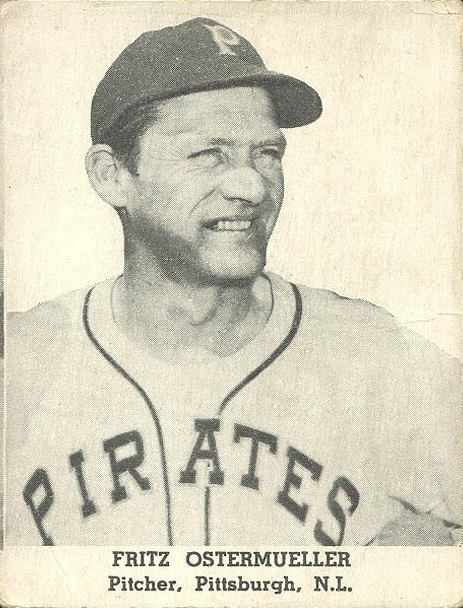 These cards were issued in 1947 by Tip Top Bread (more on them in the back section). They were distributed with loaves of bread and there are 147 cards in the set. They are slightly smaller than regular standard card size, both in height and width, measuring 2-1/4″ x 3″. They were simple looking cards, with black & white photos, and black writing on a plain white border at the bottom. This card also has the plain white background, which they did for some cards in the set, while others have baseball park scenes in the background.  The funny thing here is that it looks like whatever was originally behind him made it under his left arm. That certainly looks like it could be grass in that small area. It looks like whoever airbrushed out the background (for whatever reason), missed a spot.

Ostermueller was 39 years old when this set came out. He would pick up 12 wins that year and pitch 183 innings. 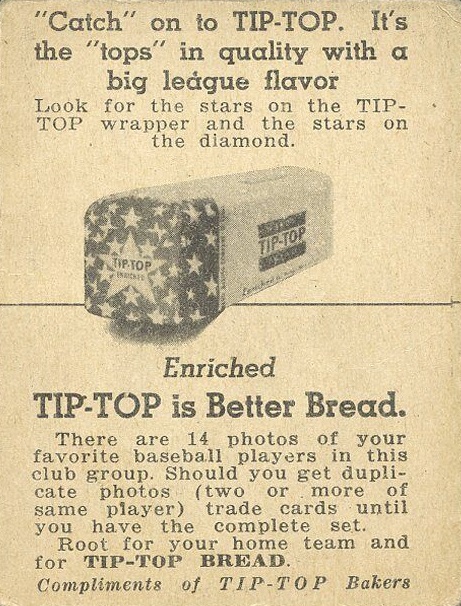 The backs here are somewhat generic, though they are not all the same. They just aren’t player specific. For example, a player on the Boston Braves has one that says “For a triple treat, eat Tip Top Bread three times a day”. That’s quite a message to send little kids. At the bottom, it tells you that “There are 14 photos of your favorite baseball players in this club group”. That’s specific to the Pirates, even though it doesn’t mention the team name. The saying at the top isn’t the same for all Pirates though. The Honus Wagner card in this set makes a promise that you won’t strike out in any game when you eat Tip Top Bread. They were reckless to say the least with their advertising. Another one encourages kids to coach their friends to eat Tip Top Bread.

If you’re interested in this card of Ostermueller, you don’t have many options. In fact, there’s one right now and it’s $100 for a PSA 3. The one you see here in the scans is the only sold copy in the last three months on Ebay and it went for $31 delivered. Ostermueller played five seasons in Pittsburgh (1944-48), where he posted a 49-42, 3.48 record in 796 innings. The current Pirates could sure use one or five players just like him right now.