I had a strange thing happen with yesterday and today’s Card of the Day choices. When I decided to use Tom Parsons for the article subject, I thought he had a signed card in a recent Topps issue. Three things instantly clicked with him. I remembered it was a 1960s pitcher, with a short career, and he was obviously still alive to sign the cards 50 years later. So I searched his name on Ebay and nothing came up for a newer card, so I did an article on his 1962 Topps card and forgot about checking to see who I was confusing him with for that newer card.

Cut to today’s This Date in Pittsburgh Pirates History article and I looked down the list of names of players born on September 14th before updating all of their bios. As soon as I saw Frank Carpin’s name, it all came back. The 1960s pitcher I was thinking of was Carpin, who turns 84 years old today. He signed a bunch of cards for Topps in 2015 so they could insert them in their Heritage set. Here’s a look at one of those cards, and as an added bonus, I went for the tougher version of this card. 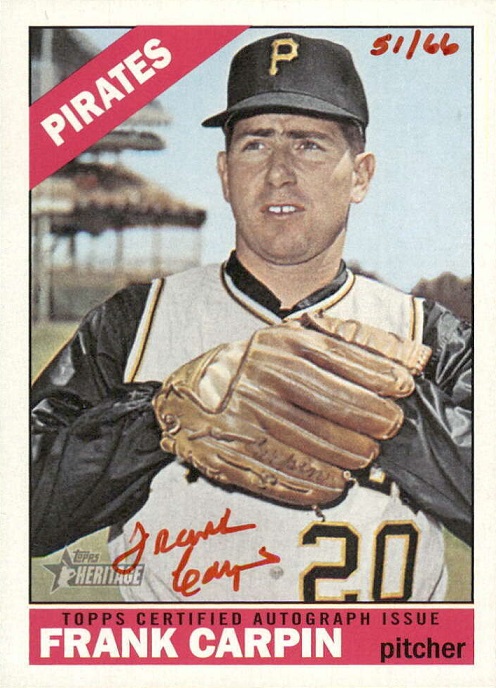 This is a near replica of the 1966 Topps card of Carpin. The photo is the exact same and the bottom section for the name/position are the same colors/setup, as is the Pirates banner across the top left. It’s basically a replica with markers to tell you it’s not the original. Those being the Topps Heritage set symbol in the bottom left of the photo and the “Topps Certified Autograph Issue” in the name/position section. Topps added that so it couldn’t be passed off as the original, but the funny thing now is that this card is worth more than if he signed an original, as you will see in the pricing section below.

You can see that he signed this card in red and at the top it is numbered “51/66” or card #51 of 66 copies. That only includes the red signature. He also signed copies in blue and those are not numbered and they are also easier to find. As a side note, the first scan I found was card #6 of 66 and I started to save the scan, then said “Nope, not today, Satan!”. I have a feeling that is going to be a hard card to sell, though it is numbered “06” so that might help. 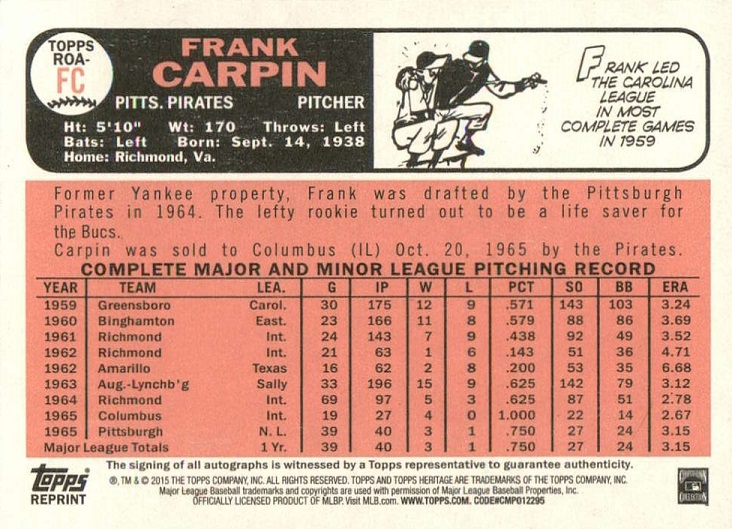 The back is a replica of the 1966 back, with some legal mumbo jumbo at the bottom to let you know that it’s not a real card…if the front didn’t give it away. Also, the “number” should be a good indicator in the top left. The back tells you the interesting note of how well he did for the Pirates and how they already moved on from him, sort of. Teams had working agreements with clubs back then, and it was a little different than how it is now. They would sell players to teams they had agreements with, knowing that they had the first chance to bring them back. The problem with that plan for the Pirates was that Carpin was selected by the Houston Astros in the Rule 5 draft, so they ended up losing him.

If you’re interested in this card, you have three choices on Ebay right now. The one in the scan above is $43 delivered (plus tax). The demon card is $44, and there’s one numbered 49 that is $30, with a best offer option. That one is the best one on Ebay right now because the easier to find blue copies are both priced right about the same amount. I know only two blue copies makes it sound like it is harder to find, but people are more likely to sell the more expensive cards. The one sold copy in the last three months was a blue signed one and it went for $13 plus tax. It was also a straight auction, which is where you will usually get your best prices. Three signed 1966 Topps cards by Carpin have all ended up selling for under $10 delivered in the last three months.