Today’s Card of the Day comes from my favorite set from the 1960s and it features Pittsburgh Pirates pitcher Tom Parsons, who had a rare occurrence for Topps. We are looking at his 1962 Topps card, which is recognized as his rookie card. As you will see below, it’s only Parsons on the card. The reason I mention that it’s only him is because three years after his rookie card came out, he appeared on a 1965 Topps Rookie Stars card while with the New York Mets, and he shares the card with outfielder Cleon Jones. I highly doubt Parsons is the only player who appeared on a Topps solo card first, then a combined rookie card with someone else, but I don’t know of any others off-hand. If you add in the three-year time period between those two appearances, it could just be him in that category.

Parsons appeared on his first Topps card before he debuted in the majors. It was actually more than a year before his first game occurred. That first game on September 5, 1963, turned out to be his only game with the Pirates. He was traded to the Houston Colt .45’s in a June 1964 deal that was soon reversed. Then not long after getting him back, he was sold to the New York Mets, approximately one year to the day from his big league debut. He played for the 1964-65 Mets, then got traded to Houston again, except this time he stayed there in the minors and never played in the majors again.

Parsons was a big dude, especially for back in the day. The 1963 Pirates had some big players, especially among the pitchers. At 6’7″, Parsons was the tallest. Topps didn’t show that height on his card, as you will see now when we take a look at card #326 from the 1962 Topps set. 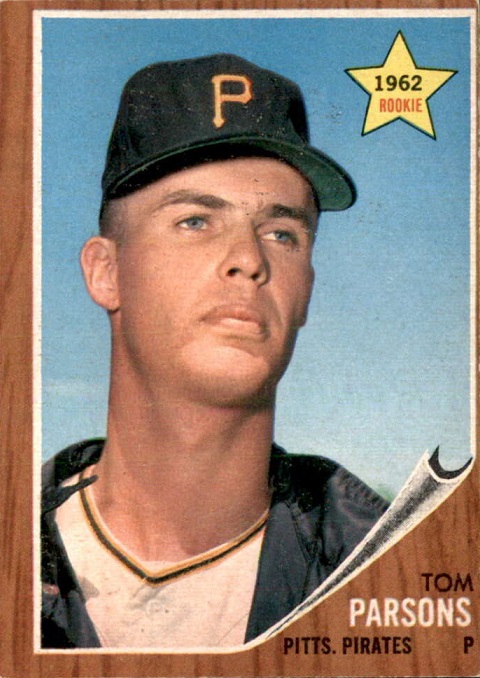 Knowing that Parsons is 6’7″, you can probably see it in this card. Looks like the photographer was shooting up on an angle, but you gotta think it would have been cool if that got a full body shot on the card just to highlight it. I’ve talked a few times about home much I love the look of this set. The wood-grain border is great and I like how they have the bottom of the photo peeling up. Both things were a different look for Topps and they worked well together. This is the first 1962 Rookies card that we have checked out, as indicated in the star in the top right of the photo. The only ones I like more are the players with the rookie All-Star team trophies. Parsons is among the group of 1962 Rookies who have real photos on their cards. Many of the others have artwork instead of an actual photo. 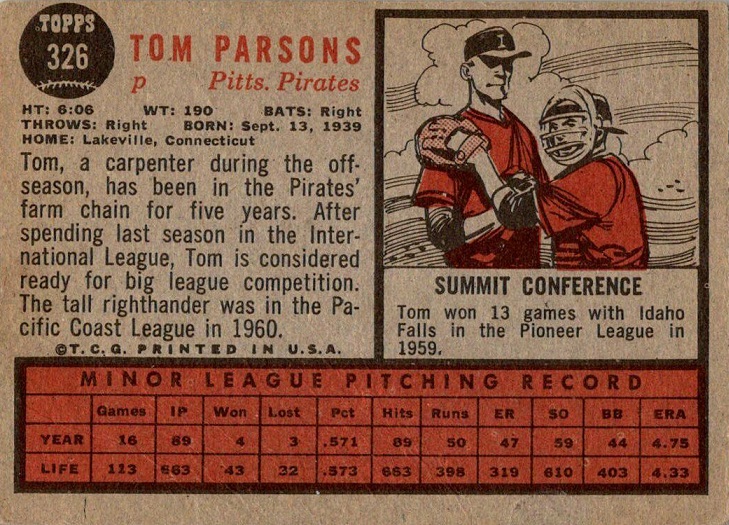 The back here didn’t give Parsons full credit for his height or weight. They did mention that he was a carpenter in the off-season. As you can see with his birthday and some quick math, he debuted in pro ball at 17 years old. When it says he has been in pro ball for five years already, just realize that he was only 22 years old going into that sixth season. You can see that he had a pretty good record at the time, though the career ERA was a bit high. I think this is the only time that Generic Gray Topps Man actually looks a little like the player he’s representing by making him so much taller than the catcher.

If you’re interested in this card, you will be happy to know that it’s cheap for a 60-year-old card. Starting with not cheap, you can get a PSA 7 for $85, which is a bit high compared to closed auctions for the same grade. There are some ungraded cards that are priced high, then for $20 you can get the most expensive autographed card. He has a great autograph, but remember that he’s had 60 years to sign these cards, so I’m sure there are quite a few out there. There are six other autographed copies and they are going between $10 and $15. If you’re a budget collector, then there are plenty of choices in the $2-$3 range delivered. Happy collecting!