This Card of the Day series has already featured Gene Freese here twice and David Freese here once. Time to get the third Freese out of the way for his one and only appearance in this series. George Freese was born on this date in 1926 in Wheeling, West Virginia. His brother Gene was born there 7 1/2 years later. They ended up being teammates for a few months with the 1955 Pittsburgh Pirates. David Freese was born in Corpus Christi, Texas in April of 1983 and he’s not related to the Freese brothers so I don’t even know why I mentioned his birthplace. All three of them played third base for the Pirates though, so they share something besides the same last name.

George Freese had a brief big league career spread over three stints in the majors, resulting in him playing 61 games total for three teams. Most of that time was spent with the Pirates, where he played 51 of those 61 games. The timing of his stint with the Pirates was perfect for him to be in one of my favorite sets, the 1955 Bowman set. I said this is his only appearance in this series because this is the only card he had while with the Pirates. In fact, this is the only card of him that showed up on an Ebay search for his cards. The only other “card” I could find from him is a postcard set put out while he was a manager in the minors in 1966. So here’s a look at card #84 from the 1955 Bowman set. 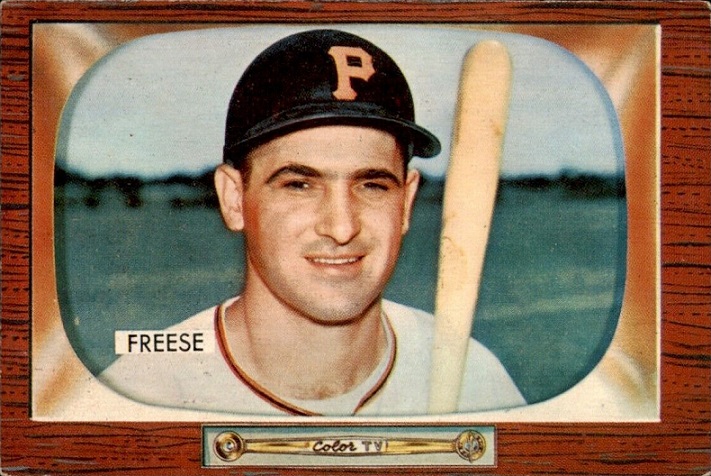 I’ve covered this set numerous times and I’ll eventually get to all of the Pirates in the set. I’m a huge fan of the Color TV look and the wood-grain borders. If you know your history (or remember the previous articles), the Color TV was just hitting homes around this time, so the fact that Bowman thought about using it as a card design and then did an outstanding job of it, makes it an even better set in my mind. These cards had to be popular from the start. I don’t know that for sure, but Color TVs were such a big deal at the time. All of the cards had a horizontal layout because of the design, and they only went with last names, even when two players with the same last name were on the same team. 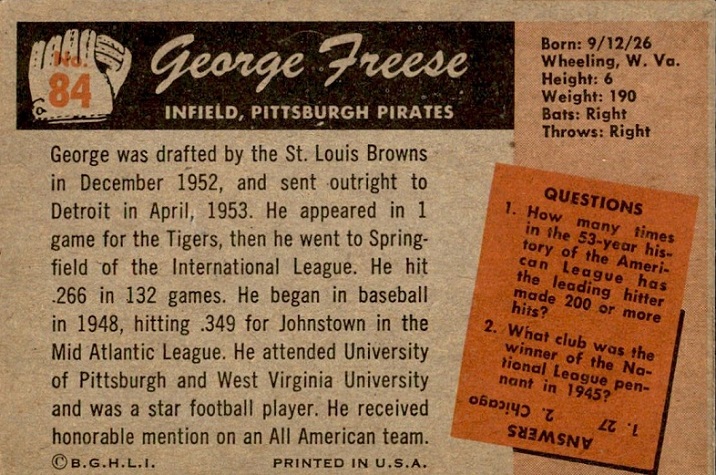 The back has a mini bio of the player and a pair of trivia questions in place of stats. It’s interesting that they break down his early big league time and some minor league time, but there’s no mention of how he got to the Pirates. You can read about that in our daily history article. Also, no mention that his brother was with the Pirates too. That first trivia question is tough. I doubt anyone would know that off-hand, even back then when the card was new. I took an educated guess and was off by ten.

This set is extremely popular, which means you can find plenty of copies on Ebay at any time. The supply keeps down the prices of this set. The most expensive ones are signed copies. He passed away in 2014, so he had plenty of time to sign cards and there weren’t any other options, making this was a popular card for him to sign. The top two prices are both around $75 delivered. A PSA 5 is over-priced at $62, while a PSA 7 is $54. Two autographed copies are about $43 with best offer options. Most of the rest are $10 or less. The $8-$10 range is where you want to be for a nice ungraded copy, but some are ever less. There are seven options under $5 delivered.