I have only used Don Slaught in our Card of the Day series once and it was exactly one year ago today. He’s celebrating his 64th birthday somewhere today, and we are going to celebrate his time with the Pittsburgh Pirates by giving him a second Card of the Day article.

I used the 1995 Score card for Slaught last time he was here. That article linked above is also the only time the 1995 Score set has been used. It’s not a great look, but I’m sure I’ll get around to that set again at some point. Slaught played during a time when there were many card choices, so I did the old reliable search method of just looking until something catches my eye. I landed on the 1994 Fleer Ultra set. It was the photo that did it for me, not so much the set design, though that helped out a little, as you will see below. Here’s card #260 from the set, featuring Don Slaught. 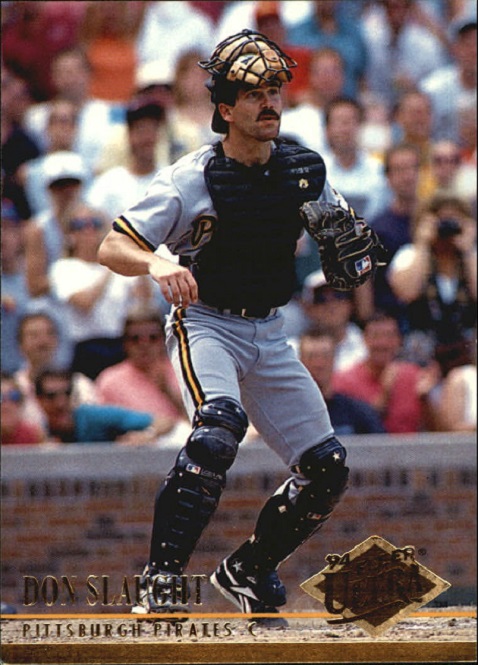 The front design for the 1994 Fleer Ultra set is simple and it takes up very little of the card. Most of the design is the logo for the set. I don’t like the lettering on this, especially how small the team name is under his name, which really blends into the background. Even on a scan that is bigger than the card in hand, the team name is extremely small. While I don’t particularly care for the design, it’s the simplicity that works here because this is a great action shot of Slaught, who could be either waiting for a throw or he just made one and he’s looking at the results of the play. Whatever it is going on, it’s a great shot and good photo quality. If this set had more going on with the front design, then it would have interfered with the photo. As a side note, I don’t think I’ve ever noticed an MLB logo on shin pads before and now I’m wondering if it is common and I just never saw it before… 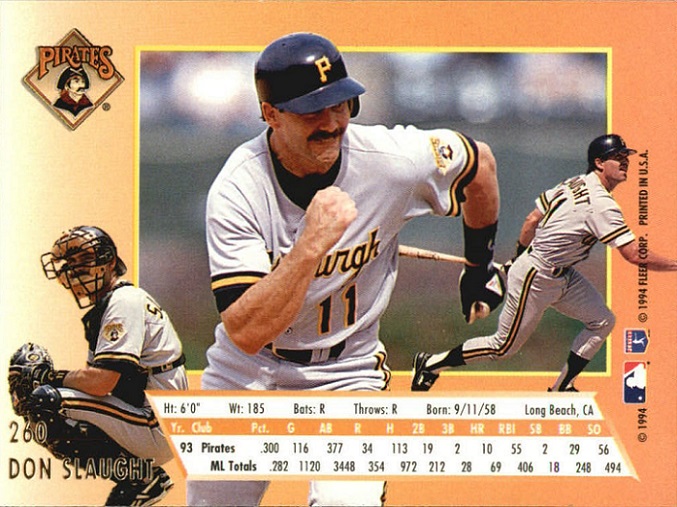 The back here is really different than the front, almost like they don’t come from the same set.  The front is lacking color and you have a limited design. The back is bright and it’s bordering all four sides of the card. I am not huge on overpowering bright colors as part of the design, but I like what’s going on here with the back. Fleer went all out and gave you three more photos on the back and they are all different looking than the front, with no portrait style photos as well, which is a plus for me. I’m a big fan of the idea of adding more photos and mixing them up. I’m also glad that they included that great Pirates logo (which is not on the front), which you also see in two of the photos on Slaught’s sleeve. I’m not a fan of the limited stats, both fewer categories and only one year, BUT the fact that they put three added photos with the extra room makes it an acceptable reason to go light on stats.

This is just a common card and it’s not exactly the most popular set, so your only real challenge in purchasing one is avoiding the sellers who charge too much for shipping. There are ten listings for this card on Ebay right now. Three are under $2 delivered. Three are selling for $2 (plus tax) delivered. The rest are charging over $3, including one person who is asking $8.95 for shipping. There are no completed auctions for this card in the last three months. So basically, don’t pay more than $2. Happy collecting!