Today’s Card of the Day came from the 2012 Topps set and was a special insert in packs. The card features Neil Walker, who played second base for the 2009-15 Pittsburgh Pirates. The Pittsburgh, Pa. native is celebrating his 37th birthday today, so now is a good time to take a look at one of his cards.

Walker has only been in one previous Card of the Day article, which was posted here 16 months ago when he announced his retirement. That card was from the 2011 Topps Heritage set, which is one of my favorite sets produced in the last 20 years. It used the 1962 Topps design, and the Walker card is one of my favorites from the set because of the rookie trophy.

Today’s card is the Gold version of the 2012 Topps Walker card. Topps put a gold border on the front of 2,012 cards for each player that year and each card was specially numbered. While 2,012 cards being produced means that these cards aren’t that rare, they are definitely tougher to find than the regular card from the 2012 set. However, as you will see in the pricing section at the bottom, people tend to list these cards for sale at a higher rate because they are more collectible than the regular base card. Here’s a look at card #25 from the 2012 Topps set featuring Neil Walker. 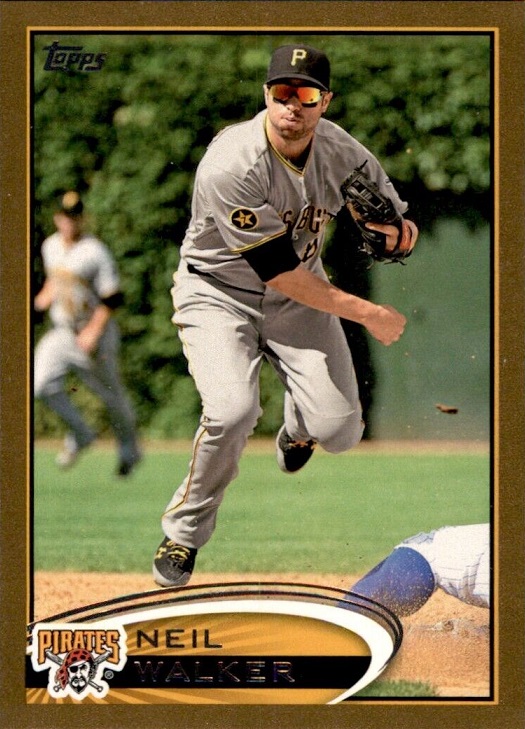 I’m a big fan of this particular card. Topps did a lot of things right here. First, this is a great action shot of Walker, possibly completing a double play. Let’s just pretend that he did. You get the nostalgic and unmistakable Wrigley Field as the backdrop here. They used Pirates colors in the card design where you see his name. They includes the Pirates logo, which is one of the better ones they’ve had over the year. I also look the look of the gold border here. It doesn’t work every single year, but this is one of the better ones, and I think it goes better with the Pirates colors. Another nice added feature here is that #7 patch on the sleeve is visible, which the Pirates wore during the 2011 season as a tribute to Chuck Tanner, who passed away in February of 2011.

The only thing I don’t like that they did this year is make the last name so hard to read by using a dark color on a dark color background. Otherwise Topps did everything right with this card. 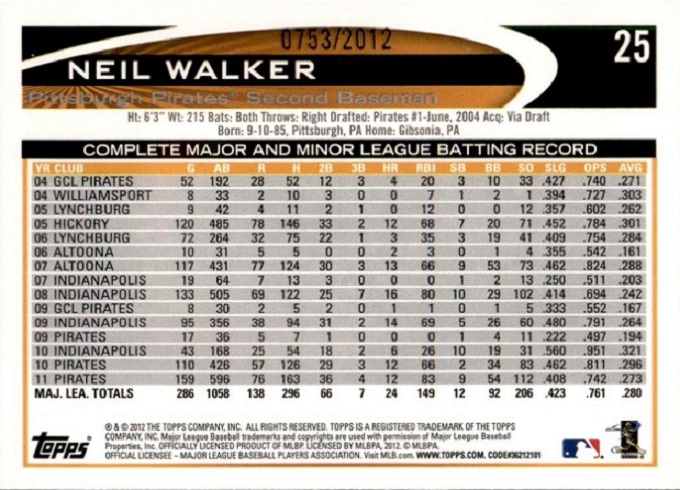 On the back at the top you can see where Topps numbered this card. The scan I used was card #0753 of 2,012. Topps used the team colors on the back here as well. I like that they included his entire pro stats, even 2009 when he did some rehab work down in the Gulf Coast League. It’s interesting that they chose to use OPS instead of OBP for the categories. You can basically figure out the OBP with the slugging and OPS available, though you might be off by one is the numbers were rounded off. However, you usually see the “triple slash” categories together, which also gives you the OPS within one point each time.

If you’re interested in getting a Gold card, you’ll be happy to know that you have plenty of options, and they aren’t all people who charge high shipping rates on solo cards. You can get this for $3-$4 each. There’s also a Gold Sparkle version that looks slightly different and is harder to find, but it’s about the same price. If you want just the regular plain white border version, then there are plenty of options for around $2 delivered.