Today’s Card of the Day subject is Dots Miller, just like it is every September 9th, with apologies to the other former Pittsburgh Pirates players born on this date. When you are born in the same town as the author of the Card of the Day series, you get preferential treatment. Kearny, NJ folk have to stick together.

Today’s Card of the Day set is one of the most popular sets of all time, and it only keeps getting more popular. The 1909-11 T206 set holds the famous Honus Wagner card that now doesn’t sell for under $1M anymore, regardless of condition (okay, maybe the worst condition one would, but that will eventually change). The set is still widely traded and collected. Not even a week before I wrote this article, I saw mid-day that over 60 auctions had sold that day just on Ebay alone. It’s still a set that has somewhat affordable options for the cards being over 100 years old, but the prices are going up so you shouldn’t delay in collecting it if you’re thinking about starting.

One of those cards in the T206 set features Dots Miller, who was the rookie second baseman for the Pirates in 1909 when they went on to win the World Series. That year he finished top ten in the National League in games, hits, doubles, triples, RBIs and slugging percentage. He then picked up seven hits, four RBIs and three stolen bases in the World Series, as the Pirates beat the Detroit Tigers in seven games. 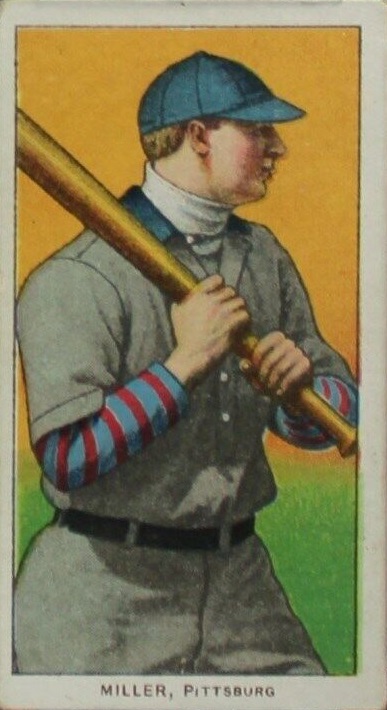 The original picture of this card still exists and the artist took some creative liberties to make it easier to draw. This photo was taken at a stadium with the backdrop being the stands, with some players visible as well. The designer here turned it into a picture with just grass and an evening sky. Sometimes these cards have more of a yellow look to the background, as opposed to the light orange you see here. It’s not different cards, just printing quality control.

The angle of the photo cuts out a great feature to that jersey he is wearing. On that left sleeve is the iconic PBC interlocking logo that they only used for the 1908-09 seasons. The undershirt here is referred to by some collectors as the “candy strip” shirts. The interesting thing is that he isn’t wearing that particular shirt in the original photo, so that was another creative liberty taken by the designer. 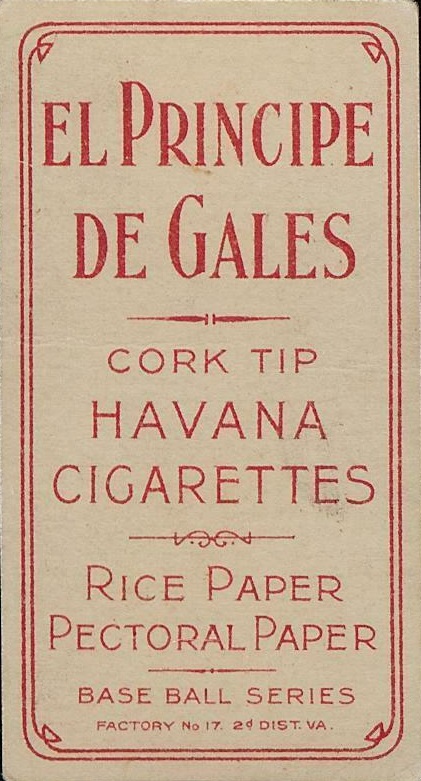 Speaking of getting creative, this scan isn’t from the same card as the front shown up top. That one has a Piedmont brand cigarette back and I have featured that brand here multiple times. I wanted to use a harder-to-find brand called El Principe De Gales, or EPDG for short. I’ll give different prices in the bottom section to show what a tough back can do to a card.

Not every player in the set is available with every tobacco brand that can be found on the back. This Miller/EPDG combo is possible, which I know because I have it. A total of 14 Pirates cards are available with this back at the last time I checked (Wagner is not one of them) and another four are possible, but haven’t been found. I like the look of this back so I tried putting together the team set and fell two short, and now the prices on them have taken off.

If you want a T206 Dots Miller card, the lowest priced ones have either Piedmont or Sweet Caporal backs. Those backs add no value, and a few other brands add very little value. A PSA 5.5 recently sold for $290 (plus tax). A PSA 4 was $268. You can get an ungraded lower grade card for about $40, but they will have some condition issues. A PSA 3 is probably where you want to be, and that is around $100. An SGC 3 will look the same, but go for a little lower. You also have to remember that last part if you go to sell the card.

If you go for the Miller/EPDG version, the lowest grade ones will run you about $150, though paper loss on the back ad will lower some of that value. If you’re buying one for the back, then you’re probably not going to be interesting in one with paper loss. If you start getting into decent looking ones, say a PSA 3, one ended not long ago for just over $300 (factoring in tax and shipping).