Today’s Card of the Day article is our first look at the 1995 Topps set. The subject is pitcher Mike Dyer, who played for the 1994-95 Pittsburgh Pirates, seeing a majority of his time during that second season. He had a four-year career in the majors, pitching 70 games in his final season, which was spent with the Montreal Expos. Dyer won’t be a regular in our Card of the Day series. I believe today’s card is the only available one showing him with the Pirates. It was the only option that came up in my search of active and completed auctions on Ebay. Here’s our first look at the 1995 Topps set, with card #136, featuring Mike Dyer. 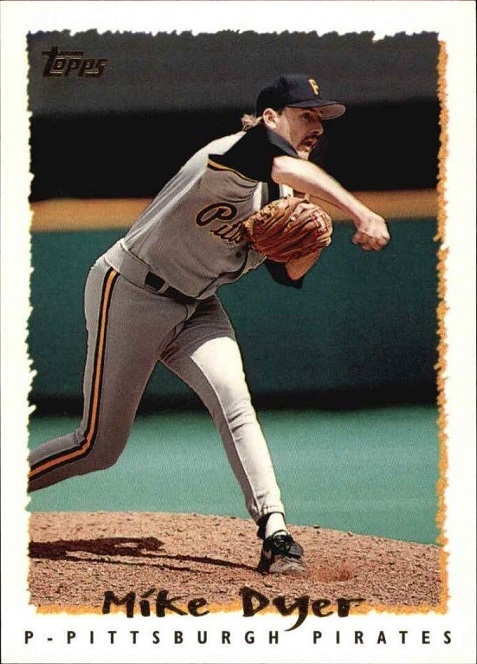 I think because I immediately gravitated towards older cards at a very young age, the cards that were coming out at that same time all seem to blend into each other. Despite being old enough to collect cards at the time, I have very few 1995 Topps cards. The look of this design is interesting. I’d say it’s one of the few sets with borders around the photo where the border didn’t have any straight lines, although Score did something similar in 1995 as well. I’m not exactly sure why the bottom and right side have gold on the border. Maybe for a shadow effect? I thought they were matching up to team colors, but then I saw some Los Angeles Dodgers cards with red, and some other teams with questionable matches, and I’m not 100% sure that’s what they were going for here.

The writing style on his name is interesting. Dyer looks a little like Doug Drabek as well. I use the word interesting to say I don’t hate it or love it, but it could grow on me if I collected the set (I have no plans to). 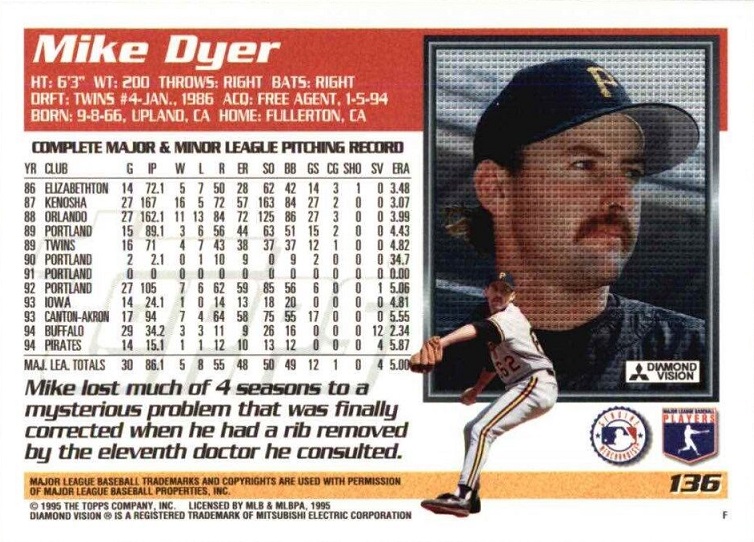 I could tell right away in the small scan that I didn’t like the back, even though it does have two things I like. The red and orange coloring on the back reminded me of those hideous Pirates jerseys from not long after this set came out. I really don’t like the Diamond Vision photo. They tried something new, it didn’t work. I like the second action photo and his complete minor league/big league stats, especially black writing on a white background to make them easier to read. The fun fact at the bottom isn’t that fun and I’m not sure where they came up with him missing most of four seasons when it was most of two seasons. His 1990 season was ended by shoulder soreness after two starts. His 1991 season was lost due to numbness in his pitching hand. I couldn’t find anything about the rib being removed, but even if that is true, it wasn’t the lone reason he missed so much time, and it definitely wasn’t four years.

I really should do a summary of the card design during the first time I look at them, but that’s something I should have thought about 2 1/2 years ago. I like the front design. It’s nothing great, but it works. Not a fan of the back, though there are parts of it I like. Overall, three stars (out of five I guess, maybe six)

If you’re interested in this card, you have about a dozen options on Ebay right now, and there is nothing special about any of the auctions. Just watch for the shipping charges and don’t pay more than $2 delivered. Happy collecting.