Today’s Pittsburgh Pirates Card of the Day features someone who played three seasons with the Pirates, but he didn’t have any cards while he was with the team. However, he has a card that many vintage collectors know about due to the picture on the card.

Ed Poole, who was born on this date in 1874, pitched for the 1900-02 Pirates. That put him on the first National League championship team (they didn’t win in the American Association either) in franchise history, and he also played a very small part on the best team in franchise history. He allowed one run over eight innings on May 14, 1902, then ended up pitching the rest of the season with the Cincinnati Reds.

In 1902-03, Sporting Life distributed cabinet cards of big league players, including Poole. Cabinet cards are basically just much larger cards than regular cards and usually they are much thicker cards. I don’t know the date when they took the photos, but many of the players dressed up in suits for the photos. Poole was one of the players in a suit, so it’s possible that the photo was taken when he was a member of the Pirates.

Online sources have Poole being sold to the Reds in April, which we obviously know isn’t true based on him playing for the Pirates on May 14th. He also pitched for the Pirates on June 8th in an exhibition game against a minor league team from Newark, and on June 17th against a team from Worcester. He was released on July 3rd, in part because he was unhappy that he wasn’t getting any mound work. The Pirates went 103-36 that season, so it was tough for an extra pitcher to see action on that team.

Anyway, the fact that those Sporting Life cards came out in 1902 and he was with the Pirates until July of that year, plus the fact that he isn’t in uniform, led to me deciding that I could use today’s Card of the Day choice on his date of birth. The correlation to today’s card is that the E107 Breisch-Williams set used the Sporting Life photo for their card in 1903, so it’s the same photo, but it’s clearly marked as a different team (as is the Sporting Life). It’s a card that gets a lot of attention and I wanted a good excuse to use it here. So without anymore blah blah about the reasoning, here’s the E107 Breisch-Williams card of Ed Poole. 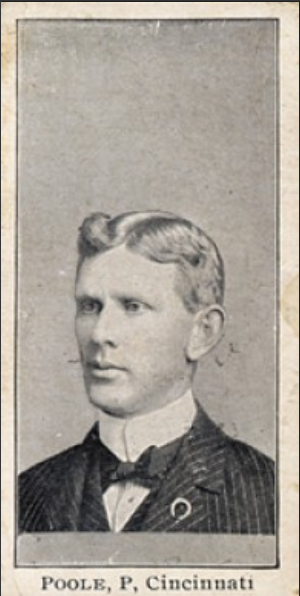 Since the Breisch-Williams manufacturers were using Sporting Life photos, what you’re seeing is that photo on a card designed to have a much bigger photo. For vintage card collectors, they immediately made the link between his name and the fact that it looks an awfully lot like he is sinking in a pool. The other cards in the set don’t look like this one. Their photos take up much more of the card and there’s no gray bar going across the bottom of the photo. The centering already looks ridiculous, but imagine if they didn’t put that bar across the bottom. It would look like he was four feet tall and they didn’t adjust the camera height.

This set is popular due to scarcity and the fact that it includes a lot of great players. There are also very few sets made between 1890 and 1907, so anything from that time period will be popular because it’s the only option for many players. The look of the set is very simple and all of the photos are in black & white. Poole also has a Brooklyn team variation. 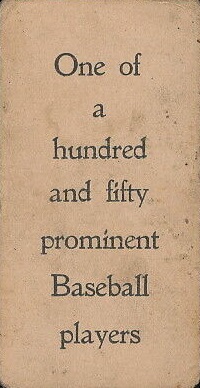 The backs of these cards are extremely simple. It tells you that the set has 150 prominent baseball players. Many bigger sets back then have set numbers on the back that aren’t true, but there really are 150 players in this set…probably. There are 148 known players and these cards are rare, so it’s possible that the last two are out there. These backs can also come as blank backs and there are ones with “Breisch-Williams” stamps across the back vertically, which is where the set gets the name. The “E107” part is just a catalog number given out many years after this set was produced. The “E” stands for early candy and the 107 is part of random numbering (though it goes in order numerically, the starting point was just picked randomly).

If you want this particular card, you better have money, patience and the willingness to battle it out. There are people who want it just for the look. Getting a card from this set seems more likely, but still pricey. The lowest priced one on Ebay right now is $1,200 for Chief Zimmer, who was a catcher for Pirates during the 1900-02 seasons with Poole. The most expensive one right now is a Cy Young card in PSA 1/poor condition and it is $34,000. As for sold auctions, there is one and it was $500 for a card trimmed on both sides and the top. No Poole has been on Ebay for the last three months.