One of my favorite sets produced in the 1930s isn’t your standard looking card. It’s the 1934 Diamond Matchbook set, and the second word in that set title is quite literal. There were pictures and bios of Major League baseball players put out on matchbooks for a four-year period starting in 1934. We have looked at these cards (in the collector’s sense of the word “card”) twice before, starting with the Gus Suhr 20 months ago, then followed by a 1935 version showing Ralph Birkofer ten months ago. Apparently I’m doing these every ten months, so place your bets now on the next Card of the Day subject from the Diamond Matchbook series, coming in June of 2023.

If you already read today’s Pittsburgh Pirates daily history article, you read about Tommy Thevenow, an infielder for the 1931-35 and 1938 Pirates. This Diamond Matchbook of Thevenow came out after he batted .312 in 73 games for the 1933 Pirates. Remember that average, as we take a look as his card. As a heads up, there’s a second scan that makes the top half of the first scan easier to read.

This is how most of these matchbooks are displayed now. A large majority of them are missing the actual matches. Many others are missing the striker part of the matchbook, just like you see (or is it don’t see?) here. It would be located at the top here, but it has been removed. My guess is that a lot of kids got these after the matches were gone and the striker was removed before they got them. The Old Judge set from 1887 that we have covered here numerous times has a lot of examples where the bottom ad was trimmed off, and the guess with those cards is that parents didn’t want to give kids a card with a big cigarette ad on the front. It may or may not be correct, but it seems logical.

When these Matchbooks were produced, Thevenow already had three full seasons in with the Pirates. However, that photo shows him back when he was still with the St Louis Cardinals, where he debuted in the majors in 1924, and remained there until spending the 1929-30 seasons with the Philadelphia Phillies. As you can see above his photo, this is a Pittsburgh Pirates card. Old card manufacturers didn’t care much about matching the photo to the current team. We have also shown numerous examples from this era where the photo was much older than the card, yet the team was still correct.

Here’s the back turned so it’s easier to read: 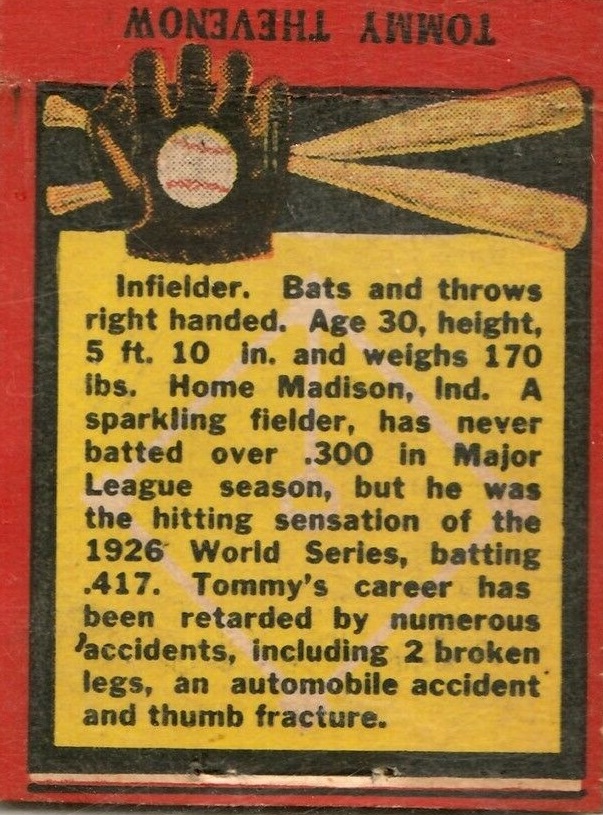 The back has a nice little bios for Thevenow and they included personal info, such as height/weight, age, etc. That first fact they included is a fun one, especially after what I told you to remember in the top section. He had quite the 1926 World Series, including five runs scored and four RBIs, as the Cardinals beat the New York Yankees in seven games (the series ended with Babe Ruth getting thrown out trying to steal). Then two years later, he didn’t get a single at-bat in the 1928 World Series, which was lost by the Cardinals. The rest of the back tells you about how he was injury prone.

There’s a semi-hidden baseball diamond under the bio section. The design of these is simple, but it works. It gives you that old school feel. If you look at the bottom, there are two holes there, which are on all of the cards unless you find ones that are complete. Technically the holes are still there, they are just filled with the staple that has been removed on all of the other versions.

There is only one of these for sale right now and it’s the one you see above. When you have the only one listed, you can set the price and that person is asking $499, though it has a best offer and free shipping. For comparison purposes, other common cards missing the striker and matches in similar condition have ended for $10-$20 recently, including some lots that have multiple matchbooks. You can get Hall of Famers in similar shape for $30. Basically, I’m saying if you want one of Thevenow, just wait for a second one to show up.