Card of the Day: 2022 Topps Tier One Bill Mazeroski

Today is the 86th birthday of Hall of Fame second baseman Bill Mazeroski, who spent his entire 17-year career with the Pittsburgh Pirates. He debuted in 1956 and played his final game in 1972, helping the Pirates to two World Series titles during that time. He was also just inducted into the Pirates Hall of Fame in the inaugural class.

Mazeroski was an easy choice for today’s Card of the Day subject. He’s been featured here four times before, but that still leaves a ton of cards to choose from. I went into the search open-minded, not knowing if I would use a card from his playing days or something put out after 1972. I got about two cards deep in my search on Ebay before settling on the card I wanted to use. It’s a brand new 2022 card from Topps, but it definitely has an old school feel. Here’s a look at the Prime Performers Autograph card of Bill Mazeroski from the Topps Tier One set. 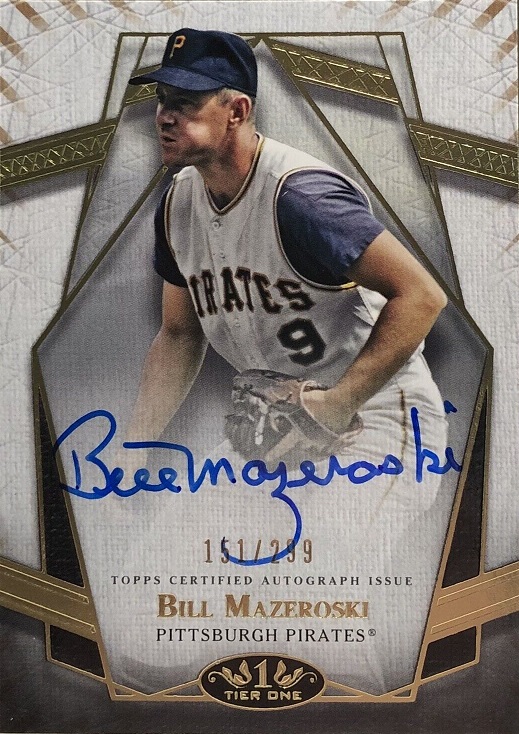 There’s a lot to like on this card. First off, that is a great game action shot of Mazeroski. Those vest uniforms came and went during his career, starting in 1957 and running through 1970. Roberto Clemente was also with the team during that entire time. I really like the design of the card, just everything about it, and the color choices work well with the Pirates colors. You have to love the autograph from Mazeroski, especially if you collect modern autographs and can’t figure out a single one without the picture of the player giving it away. That is what autographs should look like.

They put out 299 of these particular cards and this is #151. Card #009 would probably have some extra value because it matches up with his number. I know some people who try to collect autographs that way. Card #1960 would probably be the most valuable, but it would also be fake (unless Topps decided to make a cool error “by mistake”), so don’t go looking for it. 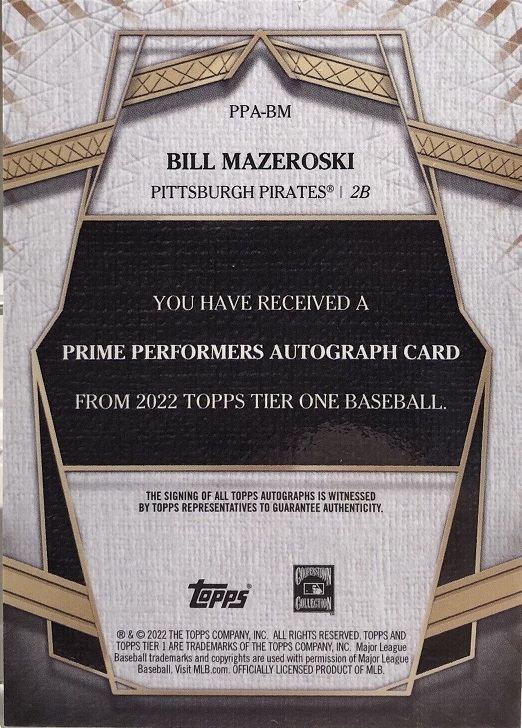 The back is just to let you know that you got an autographed card and it is authentic. There’s nothing much about Mazeroski except his position and team, which I’m 100% sure all of you knew already. The back design keeps up the theme of the front. Not that it does anything for this card, but I always liked that Cooperstown Collection logo.

These cards are easy to find right now because they came out this year and they are trading well on Ebay. A total of 17 have sold, plus two of the tougher-to-find silver ink options, which only has ten examples. For the blue ink (299 copies), the prices for sold copies range from a high of $65, down to $40 delivered. There are seven active auctions and five of them are straight auctions and all going much less than $40 right now, so the prices are likely coming down. I might be bidding on one of these before you see this article. If you like the card, you might be better off waiting a little bit before buying. New cards always go for more when they first come out, then they cool down as the people who had to have them right away get their copies. The opposite is true if you’re a seller. I’m not sure why you would want to sell one of these beauties, but the best time to list them is right away for any new cards, especially the star players. Happy collecting!