Today’s Card of the Day comes from a set that I had to do some reading about before posting, because I don’t have any of these cards and don’t even remember seeing this set before. Today’s daily history article is light on available players to match up with a Card of the Day article. I was going to use Hall of Famer Fred Clarke because he had seven hits during a 1901 doubleheader on this date, but his birthday isn’t that far away, so I’m saving his next appearance for that day. That led to me just randomly scrolling around Ebay until I found something to post today.

This 2007 Topps Co-Signers card that features Adam LaRoche and Tom Gorzelanny wasn’t my first choice from this set. However, the lack of a suitable scan for the other card led me to this card. I’m sure that if you were opening up packs in 2007, this would have been a pull that was exciting for Pirates fans. These cards were released mid-year, which also happened to be the same year that the 24-year-old Gorzelanny was having his best season in the majors. LaRoche was a major acquisition, coming to the Pirates during the 2006-07 off-season after hitting 32 homers and driving in 90 runs for the Atlanta Braves. He was having a nice first season with the Pirates as well.

It’s not an exciting combo looking back on their time in Pittsburgh (winning seasons from the team would have helped), but in June of 2007, they were the players you wanted to get together on one card that they both signed. So here’s a look at their 2007 Topps Co-Signers card. 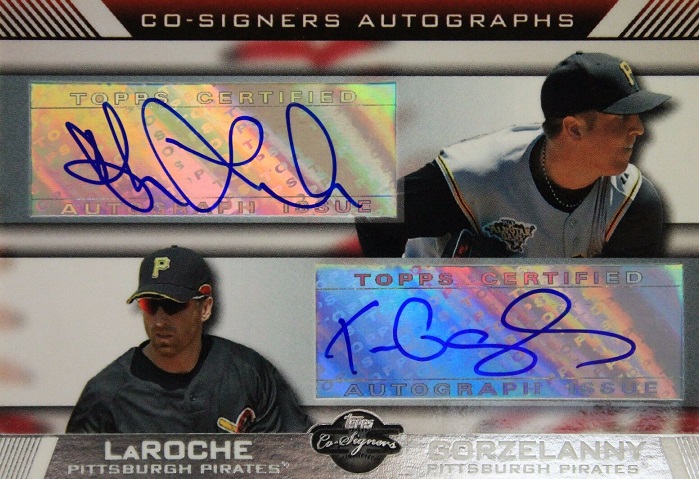 You can really see the beginning of the downfall for autographs on this card. I looked at that top autograph next to the photo of Gorzelanny, and after staring at it for about 30 seconds, I said “well, it’s not the worst autograph I’ve ever seen”, then I looked at the other autograph in the bottom right corner and realized that’s Gorzelanny’s autograph, not the top one. It looks like that line going across the middle is a separator, so it would only make sense that the autograph next to the player above the line is from that player. The only real giveaway was the “T” in the bottom autograph, otherwise who knows what Scribbles McGee and T-Egg were going for here. The hard-to-believe thing now is that quite literally, at least 90% of current day players have worse autographs than the nonsense you see above. That LaRoche autograph is so bad it didn’t even cross my mind that maybe it didn’t say Tom Gorzelanny, yet it’s great by today’s standards.

Looking past the odd setup for the autographs, I like the look of the card here. You get two nice photos of the players, when some of these cards used just small pictures cropped to show the player’s face, whenever they had multiple autographs. The card is really busy, with random looks and colors, but the photos paired with the autographs catch the eye. 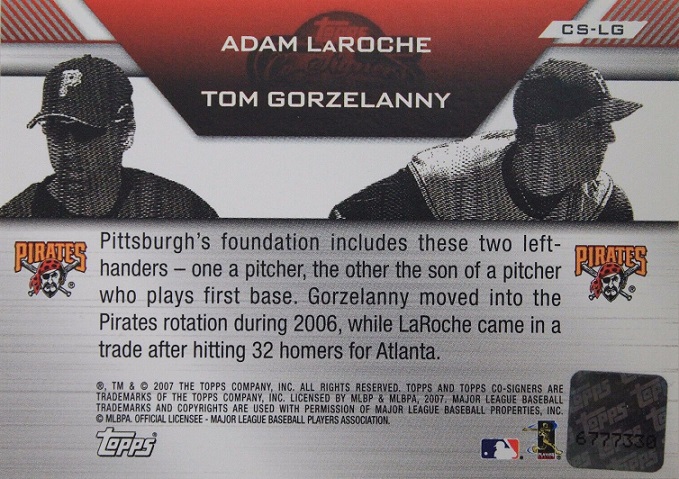 The back has two Pirates logos for the price of one. Well done, Topps. The back gives a very quick summary of why the two players are interesting, and then they reused the same photos from the front with some odd special effect added. Not a fan of that look. Did anyone else read that little bio section and read it as LaRoche’s father was a pitcher who played first base? By the way, if you’ve never watched his father Dave pitch, go to some YouTube highlights. It is well worth your time. I’ve gone back and watched them every six months or so for years. Did I mention I like the two Pirates logos?  The hologram at the bottom is a special addition from Topps to help verify authenticity.

If you don’t mind the autographs and you’re interested in this card, you might be pleasantly surprised to find out that you have multiple options for under $10 delivered. One of the cheaper ones now is a standard auction that will be done before you see this card, but it has no bids, so it might be relisted. The others are just sitting there waiting for you (yes, you specifically) to buy them.