Today’s Card of the Day comes from the 2007 Topps Heritage set, which used a throwback design to the 1958 Topps set. Today’s player choice is Pittsburgh Pirates reliever Matt Capps, who played for the team from 2005 through 2009. This is the second appearance for this set, which I first used 18 months ago. It’s also the second time for Capps, who appeared here a year ago today on his 2007 Topps card. It’s no coincidence that he’s being featured on September 3rd for a second straight year. Capps turns 39 years old today.

It’s not a secret that I’m a big fan of the Topps Heritage line of cards. Every year they use an old design from 49 years earlier (not sure why they picked 49) and issue cards of current players. Topps had some great front design ideas in their early years. The 1958 set is not among my favorites, but I like the 1959 set even less, so it’s not the worst. I’ll save the description for the front section below, so let’s get right into card #369 in the 2007 Topps Heritage set, featuring Matt Capps. 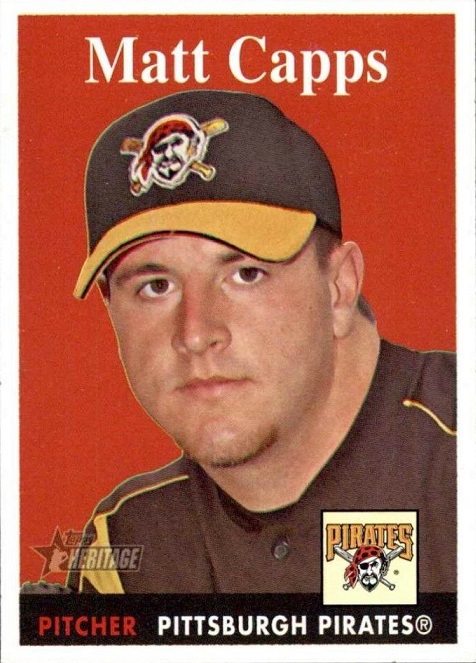 The 1954 Topps set used that same solid one-color background for players, utilizing different colors throughout the set. I liked it in 1954, I don’t hate it here, but 1958 was a boring look compared to the three previous years. The 1956 set is my favorite, followed by the 1955 and 1957, with the latter using real photos. You got great staged action shots inside stadiums with little distraction from the actual design, which was a first for Topps. So they had a really good three-year run and then went with a boring look to follow, taking away the background. The 1954 set also used multiple photos, which had a nice look to it, and they continued that trend into 1955-56, making it better each time. I definitely think it’s a step back, and because of that, I wasn’t a big fan of the 2007 Heritage set when it came out. I still bought some, but not many.

You gotta love the 2007 logo, especially compared to the current logo (I want to say “boring” again, but I’ve already used that word twice, so I won’t). You don’t have to love the hat Capps is wearing. I know some people like it and some don’t. Feel free to share your opinion. I’m just okay with it, which is a boring answer. Nothing against Capps, but I really like the staged action photos more than the closeup portrait style options. He seems like he likes the staged action photos better as well. 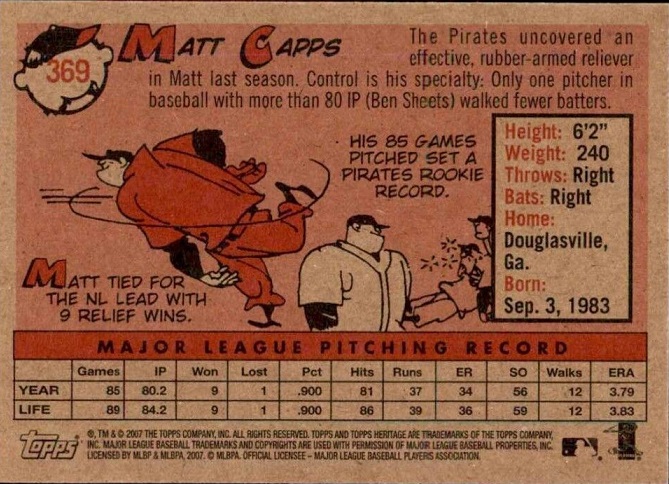 The back is also themed just like the 1958 backs, with one line of yearly stats, along with career stats. I don’t think that cartoon depicting Generic Gray Topps Man in red is humanly possible, and I’m not talking about the body shape. It looks like he is throwing lefty, which Capps was a righty, but also look where the back leg is on the follow-thru motion? Maybe that’s easier to do with those stick feet. Also in the second cartoon, I’m guessing the guy in the middle is the manager? He seems very content overworking his pitcher. Trust me, I enjoy the old cartoons because they are so ridiculous.

One thing I always wondered about the 1958 Topps is what were they going for with the baseball in the corner for the number. I like that idea of using a baseball for the number, but this one has such an odd look. They had to be going for something here. I don’t know.

If you would like to purchase this card, there is a magical place called Ebay where many baseball cards gather. This card is a common and a few sellers have it under $2 delivered. There are four autographed options. Capps has a nice signature and his cards run between $9 and $18 delivered. The lower priced one also has a best offer option.