Luke Walker pitched eight seasons for the Pittsburgh Pirates. His big league career got off to a slow start, with five innings in 1965, ten innings in 1966 and no big league time in 1967. He then saw regular action over the next six seasons. That slow start led to something interesting from Topps.

In 1966, Topps made a Pirates Rookie Stars card for Woodie Fryman and Luke Walker. We covered that card here. Since he had just 15 innings in the majors going into 1968, Topps included Walker on a Pirates Rookie Stars card with catcher Carl Taylor. You can see that card here. There were a number of players over the years who got two Rookie Stars cards from Topps. Richie Zisk was another one for the Pirates. Dale Murphy might be the most popular, but only because his second card was packed with four All-Stars. However, not many people had three cards. Luke Walker had three cards. He will never compare to Bill Davis, who was an all-time favorite of Topps. They put him on a “Rookies” card in 1965, 1966, 1967, 1968 and 1969. That being said, the three-time club is rare.

Today we look at our third Pirates Rookies card of pitcher Luke Walker. Chronologically, this was the second card put out, but his second appearance in our series matched up to Carl Taylor’s birthday, so we went out of order. Here’s card #123 from the 1967 Topps set featuring Luke Walker and catcher Jim Price, who we will learn a little about today. 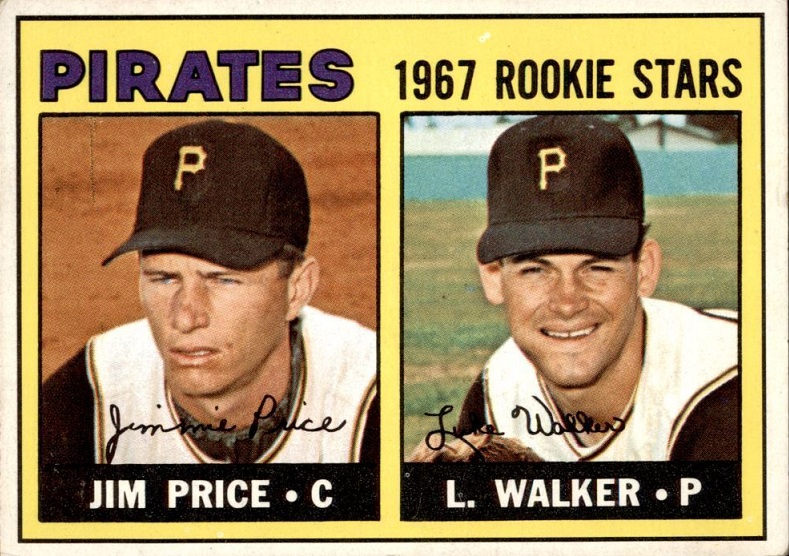 The 1967 Topps design is one of my least favorite. It’s extremely boring and all of the Pirates cards got purple for the team name color, which is basically 90% of the front design. The Rookie Stars subset is different though. They still used purple, which was better than the pink they used previously, but these cards added a yellow border around the player photos, which gave it more of a Pirates feel. With the black box for the name/position and the white lettering, they got all of the Pirates colors. The Rookie Stars cards look better than the regular cards for every team, but the Pirates look the best (obviously).

One interesting thing that Topps avoided here was using the same photo of Walker more than once. All three rookie cards have different photos. Jim Price, who signed “Jimmie” according to his facsimile autograph, never played for the Pirates. He was sold to the Detroit Tigers on April 7, 1967, so this is a rare photo of him in a Pirates uniform. 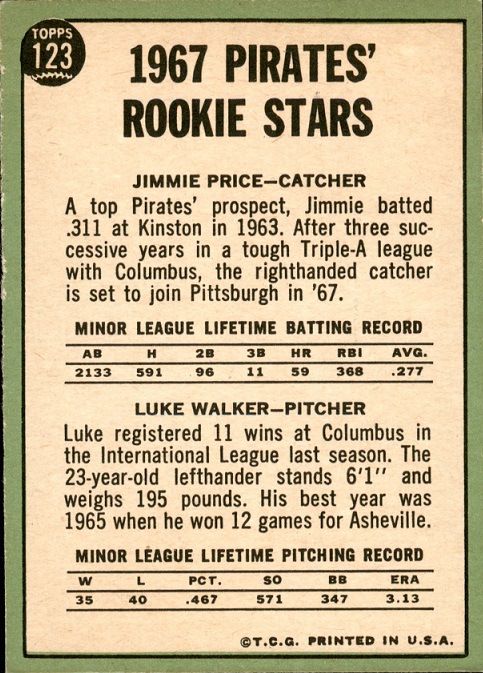 The back gives you a little info about the players, along with their career minor league stats. As you can see by the Price description, he was a rare right-handed catcher. He was also called “Jimmie” on the back here. He was set to join the Pirates in 1967 until fate stepped in the way and landed him in Detroit. It was probably for the best, but if he was a legit top prospect for the Pirates, you would think that they would have received a better trade return than cash. He ended up playing five years in the majors, all with Detroit, serving as the backup to perennial All-Star Bill Freehan. Price was a .214 hitter in 261 games, with 58 runs, 22 doubles, 18 homers and 71 RBIs. Speed was not part of his game, as he had zero triples and never attempted a stolen base in the majors. He attempted one steal (and was successful) during his three seasons with Columbus.

As for Walker’s inclusion, it made sense that he would be considered. He was young and had some big league experience. His 1967 season saw him do very well in 11 starts with Columbus, posting a 2.96 ERA and 88 strikeouts in 82 innings. However, he injured his arm in June and that’s why he only made 11 starts and saw no time with the Pirates. The good performance before the injury led to him being in the 1968 Topps set. He was still relatively young, and he proved that he was a smart choice.

If you’re interested in purchasing this card, you’ll be happy to know that Ebay has plenty of inventory and most of it is cheap, but you do have some high-end choices. There’s a PSA 7 for $33 with a best offer option, but hold on, don’t buy that one yet! There’s a PSA 8 for $32. Another PSA 7 is $30, and another is $30 with a best offer. There’s an SGC 6 going for $20. Then you have some ungraded/high grade choices for under $10. Or you can just grab a collector’s grade one for $3 delivered.