On this date in 1981, the Pittsburgh Pirates sold pitcher Grant Jackson to the Montreal Expos. He was in his fifth season with the Pirates, and his 17th season in the majors. He was a key member of the 1979 pitching staff and still extremely effective at the time of the deal. However, the Pirates seemed to cut ties with him at the perfect time, as he pitched poorly in the last month with Montreal, then had a rough 1982 season with the Kansas City Royals, which ended with him making his final big league appearance with the Pirates on September 8, 1982. It was his 692nd game in the majors.

This is Jackson’s third time in this series. His 1978 Topps card pictures him in Pirates gear that you just have to see to believe, because it doesn’t show up in many pictures. His uniform in today’s Card of the Day in more what you remember from that era, especially since the Pirates have brought it back in recent years. Here’s a look at card #426 from the 1980 Topps set. 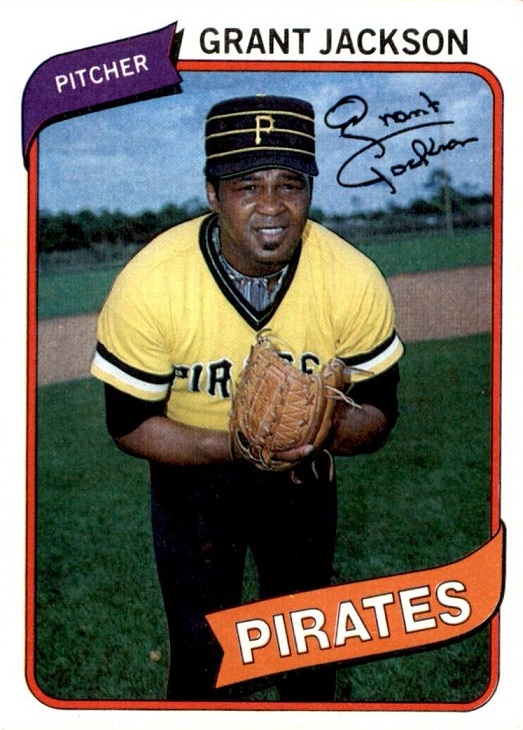 You gotta love those uniforms from back then. This one is my favorite combo, which is why I was glad that they brought it back in recent years. Our site has some great photos of recent players in the throwback uniforms. Not to use a bad pun, but the pillbox hat really caps off this look. One thing is off though. What exactly is Jackson wearing underneath his uniform, which you can see at the neckline? I have no clue by looking at that photo closely. It almost doesn’t even look like a shirt, like it’s some strange airbrushing.

I lump the 1980 set in with the bad run of 1977-79 from Topps in card designs. I think it’s the best of that group, but I’m still not a fan of it, and I’m a huge fan of the 1981 design, so there’s a reason why 1980 gets thrown in with the other three sets. I think this one would be better if they matched up team colors to each team. They actually did with a few teams and those cards look nice. Check of the Rickey Henderson rookie from that year. That’s a great looking card, helped obviously by the significance of the card.

I talk about it below in the pricing, but Jackson’s cards look great when they are autographed. Check out the facsimile auto and you can see he had a great signature. It didn’t change much in later years. 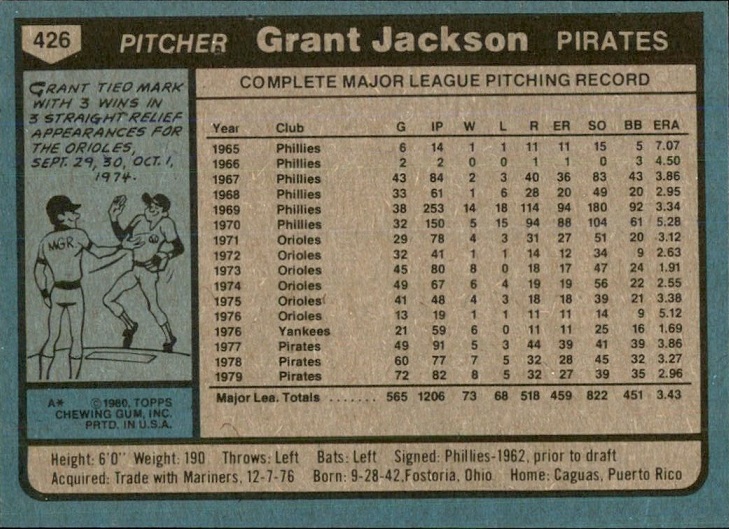 One really interesting thing here is that this scan looks like someone uploaded it off-center, but it’s actually the printing on the card that is off-center, not the scan of the card. Did you notice that the front has the same look too? Someone at the printing factory had a bad day and it escaped quality control.

I like the fact that Generic Gray Topps Man made the back of the card (his name doesn’t change just because it’s a blue background) and he’s versatile enough to play both Grant Jackson and Earl Weaver. I’ve never seen someone with so much confidence in their abilities to play every role, even though they never fit any of those roles ever. The guy could play Randy Johnson one day and Daniel Vogelbach the next without flinching.

Jackson is a good example of how small the print can get on these cards. There are actually worse examples too. Try reading the Jim Kaat card. He started six years before Jackson and he has an extra line due to two mid-season moves instead of the one you see here.

If you’re interested in this card, Ebay has plenty of options for under $10 delivered, and as you would expect, most of them are in the $2-$3 range. The more expensive listings are his autograph cards, and Jackson signed a lot. There are nine of them on Ebay right now and they are listed between $5 and $15 delivered. As usual if you just want one regular card for your collection in nice condition, watch for sellers with crazy shipping prices. Happy collecting!