Today’s Card of the Day comes from the 1940 Play Ball set and it features Ray Berres, catcher for the Pittsburgh Pirates from 1937 until 1940. This is his first time in the series. He was born on a popular date in Pirates history, with plenty of trades and ten birthdays total, so there are lots of options for August 31st if I want to match up the history and Card of the Day articles. Today’s his day, so now we check out one of his most popular cards from his career. 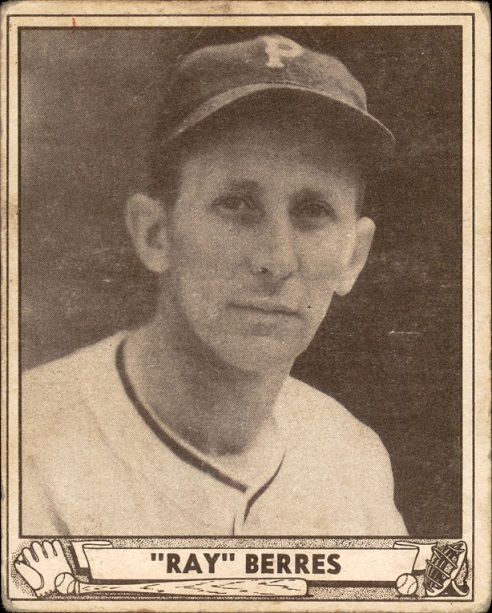 Two things really stand out about the front, and it’s not the design, which I really like and will get to afterwards. I love how they put “Ray”, as if his name wasn’t Ray. Technically, it is Raymond, but it’s not like he got the nickname Ray from anywhere else but a shortened version of his first name that everyone else named Raymond (except Raymond Burr?) uses. I’m sure there are plenty of others, just trying to prove a point.

The other thing of note doesn’t stand out just by looking at this card, unless you’re really into collecting old cards like me. Berres is in the 1939 Play Ball set as well and they used the same exact photo. The only real difference between the two sets is what makes this set more eye appealing (I know some people disagree). The 1939 set doesn’t have the name on front or anything that you see at the bottom surrounding the name. Just a black and white photo and a white frame around the photo. That set is all business, while the 1940 set likes to have some fun.

As I said, I really like that design on front because it gives the card a genuine old school look. If a 2022 card had a similar design I’d probably dislike it, but I really like it on the 1940 card. The glove, two baseballs, a bat, a mask and the banner look for the name. I’m a fan. There are a few older sets (early 1910s and 1920s) that have similar ideas and I really like those set designs as well. 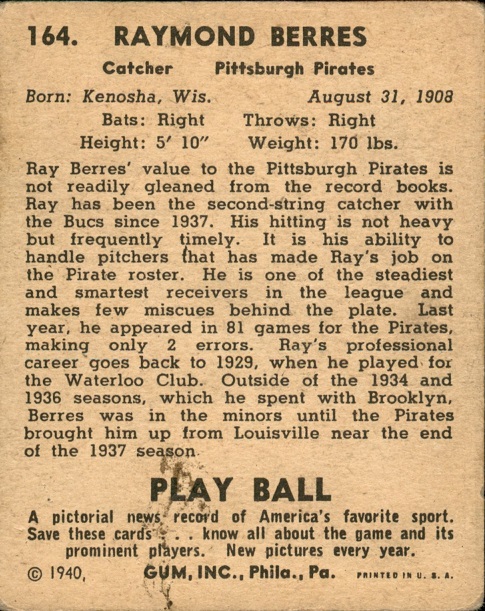 I don’t want to judge Mr Berres too harshly on his birthday, so blame this on Baseball-Reference. I was reading the back here about his value, so I checked to see if WAR lined up to what they are saying. I’d say it does, though I figured he would do a little better defensively. He has a negative career WAR, and ten of his 11 seasons show a negative number. The one rebel was his 1944 season when he had 19 total plate appearances and he caught 55 innings. Despite the negative WAR, his dWAR shows that his defense was usually slightly above average each year. So the description is his bio sounds spot on.

One other thing to mention here is his birth year. It is off by one year. He was born in 1907. That probably wasn’t a mistake for Gum Inc. It wasn’t uncommon for guys to lie about their age back then. Some said they were younger to help their prospect status, others lied about their age at a young age so they could sign a deal. Berres knocked a year off, which may have helped him when he was playing the lowest level of the minors at 21 years old and people thought he was 20 at the time (assuming it wasn’t a mistake by Gum Inc.).

If you’re interested in this card, there are currently 19 on Ebay and there are some of interest in that group. The most expensive one is just under $200 for a PSA 7. Drop a grade lower and you can cut $60 off of the price for a PSA 6. I’ll note that a PSA 6 recently sold for $105, but that was a set price auction, so the buyer could have been getting a bargain. For $63, you can get an autographed copy that is authenticated. Berres passed away at 99 years old in 2007, so he had plenty of time to sign cards. If you just want a regular copy, you’ll want to be in the $20 range, maybe $30 if it is in nice shape. There are some cheaper, but they are low grade. A total of 13 have sold in the last three months so the inventory on Ebay changes at a nice rate.