Hall of Famer Kiki Cuyler doesn’t have a lot of card options that show him with the Pittsburgh Pirates. That comes from a combo of him being with the team for a short time and that era (mid-1920s) not having a lot of card options. We have featured him in this series three times and two cards were made well after he was retired. Here’s a 2003 card from Fleer celebrating his playoff accomplishments with the Pirates, and a 2019 Donruss card. We also had him here on his 1927 Exhibits card. It’s been exactly a year since Cuyler has been featured here. That’s no coincidence either, which you knew already if you read the daily history article from today first. He was born on this date in 1898.

Cuyler’s career with the Pirates has one of the lowest points and one of the highest points in franchise history. His entire 1925 season including the World Series could very well be the best season in team history. His trade to the Chicago Cubs, in my opinion, is the worst trade in franchise history. I made my case for that here. The quick summary is that they were trading a superstar in his prime before free agency and high salaries were a thing, and doing it for a mediocre return that had zero chance of working out, and somehow it ended up going worse than possible when the two return pieces netted them 1.8 WAR total and some cash when they traded them. After those two players were already gone from Pittsburgh, Cuyler put up a 1930 season that would have set two franchise single-season records if the season happened with the Pirates.

If you want a comparison, imagine the 2022 Pirates signing Bryan Reynolds to a contract that called for $5M a year with club options for as long as they wanted to keep him. Then they traded him in division for a veteran light-hitting middle infielder and a fourth outfielder with one year left on his deal, and then picture Reynolds improving after he left. That’s about the same. Everyone hates the Aramis Ramirez deal, but imagine free agency didn’t exist when the Pirates gave him up and he signed that same deal as fantasy Bryan Reynolds. Instead of 2 1/2 years before free agency kicked in, the Cubs were getting him at cost control for the next 12 years, and he became a better player too, yet the Pirates got the same exact return. That’s about the same.

Anyway, I’m not bitter about a trade that happened 95 years ago. So let’s take a look at a 1980 card of Cuyler. This card was part of a series that came out over eight years (1980-87) with new cards coming out each year. Cuyler was in the first group of these cards, which were called Baseball Immortals. They are all Hall of Famers. 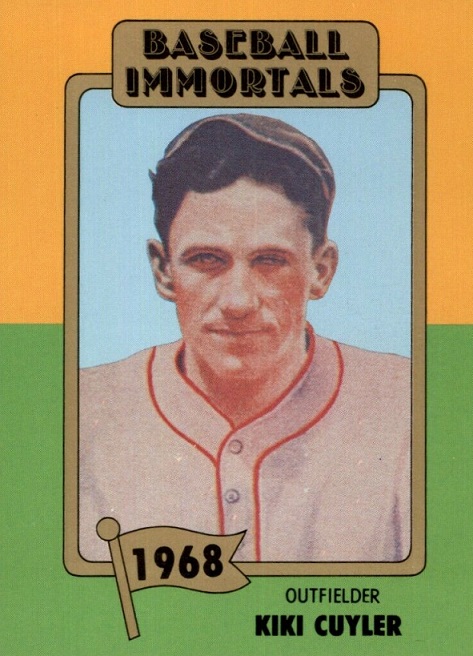 I hesitated a bit before using this card because that’s the same photo used on his 1935 Diamond Stars card, from when he was nearing the end of his time with the Chicago Cubs. You’ll see why I decided to use it anyway when you get to the back of this card.

This set definitely has a 1975 Topps feel to it, and just like that set, this Baseball Immortals card used different color two-tones for different players. The flag there with 1968 is telling you the year that year was elected to the Hall of Fame. Unfortunately for Cuyler, he passed away 18 years earlier, so he didn’t get to enjoy the ceremony and honor in person. He was represented by his wife, son, daughter and two grandchilden, while Pirates teammates Pie Traynor, Max Carey and Lloyd Waner were also in attendance. 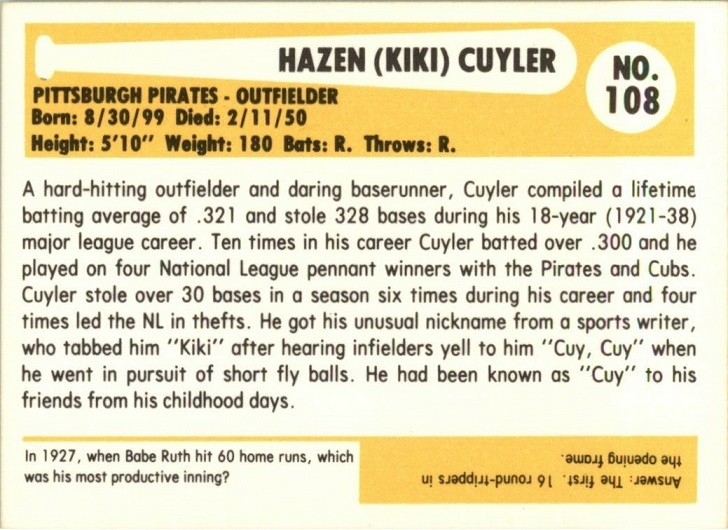 The back design here came from the 1954 Bowman set, with the main difference (besides the colors) being that the Bowman set had stats on the right side of the card. The bio section has what I’ve read numerous times about the origin of his nickname. I’ve also heard that he stuttered and it was mocking. Neither is true, though the stutter part is apparently true according to my own research of old newspaper articles. It came from a minor league manager who stuttered when he yelled out his name, and it was picked up by the fans of the team, who then called him Kiki, though I don’t know why it was spelled that way when the description above about the pronunciation is correct.

As I mentioned, the clincher with using this card is on the back. The only team identifier anywhere is on the back under his name, where they call him outfielder for the Pittsburgh Pirates. They mention Pirates and Cubs in the bio, but this card says Pirates, so I went with it.

The trivia question is a good one, though with a few clues you may have guessed that the first inning was the safest guess. You would assume that Ruth batted a lot in the first inning because he batted third in the lineup (it’s how he got the #3), and he probably wasn’t getting pitched around early. The later innings then become a crapshoot as to whether he gets an at-bat or not, and the later in the game, the fewer chances. Going by that assumption, you would say he did best in the first with home runs because he had the most chances. Just to check though, my assumption was correct and by a wider margin than I assumed. He batted 49 more times in the first than any other inning.

There’s nothing special with the prices of these cards. Just watch the shipping and don’t pay more than $2-$3 delivered. There are 12 auctions currently up on Ebay for this card and eight of them are priced too high due to shipping charges. Two have sold on Ebay in the last three months, both for $3.50 delivered. I’ll note that sellers list these cards all different ways. Some only put “Baseball Immortals”. Some list them as being produced by TCMA or SSPC, which is two brands from the same company. As you might notice by looking at the card above, there’s nothing on it to tell the year or company, so the mystery has continued. I’ve seen different numbers for complete sets, and different years for the final year of printing, and some people just call all of the cards 1980.