Johnny Ray has been in our Card of the Day series six times already, which is a lot for a non-Hall of Fame player or a real superstar, though he had a really nice seven-year run with the Pirates. I’m including him here again today because there aren’t many card options to pair with today’s daily history article, plus five of Ray’s six appearances here have featured him with other players. I decided today to use a card that was all about Johnny Ray, so the spotlight is on him for this article. I went with his 1983 Topps card, because that is one of my favorite cards for him. So here’s a look at card #149 from that set. 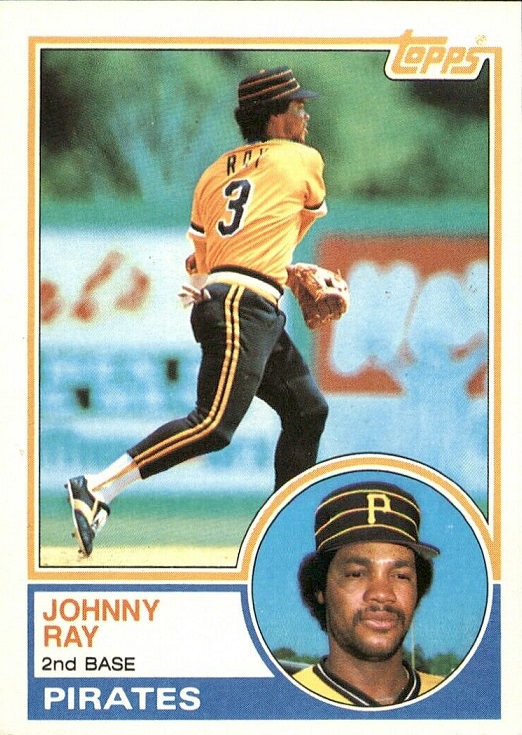 I’m a big fan of this card. I said this is one of my favorites for him, but it might be my favorite, despite him appearing in other sets that I really like, specifically all of the big three in 1987. I love the Spring Training shot with the outfield ads in the background, as well as that great uniform combo and the cool action shot. Then in the second photo, you get a good look at the pillbox cap. I wish Topps went with a black box around the bottom info instead of blue. I’d like to see how well that went with the Pirates colors on the card. 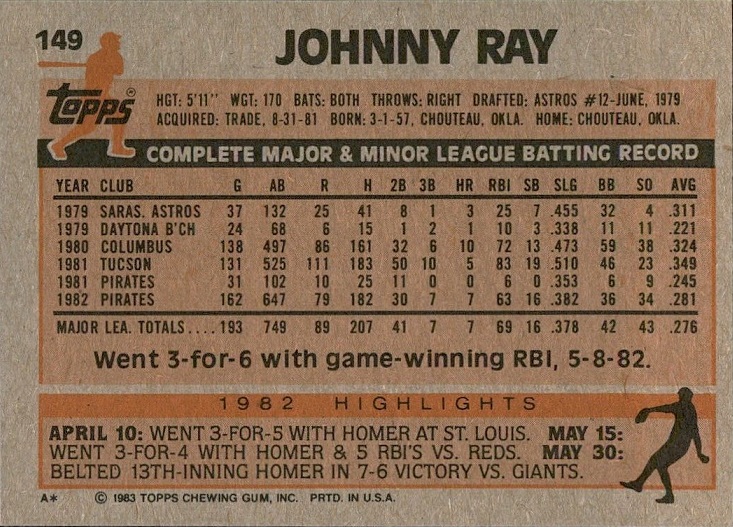 The back of the card has his complete career stats. As you can see by those numbers, he moved quickly through the minors. Up in the top right corner it tells you that he was a 12th round draft pick by the Houston Astros in June of 1979. He was with the Pirates by the end of  the 1981 season after he came over in the Phil Garner trade. Look at those stats with Triple-A Tuscon of the Pacific Coast League before the trade. It didn’t take a genius to know he was a player to target. In 131 games he hit .349 with 111 runs and 65 extra-base hits, with twice as many walks as strikeouts. He hit 50 doubles, then added 11 more with the Pirates, collecting 61 doubles in 162 games. As you can see in 1982, Ray had a strong rookie season, finishing second (should have been first) in the Rookie of the Year voting.

One thing that looks strange here is the highlights section at the bottom right, where they have a pitcher on the side. You’ll notice the top left has a hitter. Without seeing any other cards, you’d think that was a mistake, but the whole set uses the same two player outlines, regardless of the position of the player on the front of the card.

One other strange thing about the back is that they had extra room due to his limited stats, so they were able to throw a fun fact in there and it’s basically no different than the highlights section below. You might notice that all four of those facts are from the early part of the season, so I checked to see how he did through the end of May and then over the rest of the season to see if it lined up with the highlights. He had a .784 OPS on May 31st and a .667 OPS after that point. Not a huge difference, but clearly a difference.

If you’re interested in this card, there’s a magical place called Ebay you should visit. They have over 100 auctions for this card, many of them in the $2-$3 range with delivery included. The are seven of them that are autographed and the cost is around $5-$6 for one. There’s also one very interesting factory error in which his name is missing from the front of the card. The price on that is $35. I don’t know if that’s a good deal or not, but I know that it is very rare. Just six of these cards have sold in the last three months on Ebay, so the supply far outweighs the demand. That’s nothing against Ray. That’s more for every card that isn’t a superstar, with the most interest being focused on the rookies of Wade Boggs, Tony Gwynn and Ryne Sandberg.